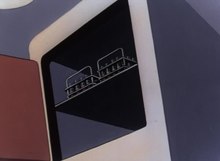 So Much for So Little is a 1949 American animated short documentary film directed by Chuck Jones and Friz Freleng.[2] In 1950, it won an Oscar at the 22nd Academy Awards for Documentary Short Subject, tying with A Chance to Live.[3][4] It was created by Warner Bros. Cartoons for the United States Public Health Service. As a work of the United States Government, the film is in the public domain. The Academy Film Archive preserved So Much for So Little in 2005.[5] Produced during the Harry S. Truman administration, it attained renewed relevance during the modern Medicare for All movement in the United States nearly seven decades later.[6]

The cartoon begins by stating that, annually, 118,481 babies — out of well over two million born — will die before reaching their first birthday. From there, we are shown John E. Jones, a baby who, unless good oversight of the environment is maintained and John himself is provided consistently good healthcare, may potentially add to this statistic.

Most of John's life is depicted: his school years, marriage, later life (as a father), and his golden years. Along the way, health service information is detailed. Before the film ends, it rewinds and returns to John as a baby, reminding the audience about the importance of proper, ongoing care availability to ensure he enjoys a robust, full life. The viewers are informed that it costs each American just three cents a week to safeguard John's, and all babies', well being.