The Johor Sultan's Headgear (Solek Temenggong). This headgear from the State at the End of the Land is one of the costumes of the last Sultan Ismail of Johor. The design of this headgear is based on the style of the Split Coconut headdress.

The Sultan of Johor is a hereditary seat and the sovereign ruler of the Malaysian state of Johor. In the past, the sultan held absolute power over the state and was advised by a bendahara. Currently, the role of bendahara has been taken over by first minister (Malay: Menteri Besar) with the constitutional monarchy system via Johor State Constitution. The Sultan is the constitutional head of state of Johor. The Sultan has his own independent military force, the Royal Johor Military Force (Malay: Askar Timbalan Setia Negeri Johor). The Sultan is also the Head of Islam in Johor state.[1]

The first sultan of Johor was Alauddin Riayat Shah II. He was the son of the last sultan of Malacca, Sultan Mahmud Shah. The descendants of the Sultanate of Malacca in Johor ended with the death of Sultan Mahmud Shah II in 1699 and throne was taken over by Sultan Abdul Jalil IV, marking the rule of the House of Bendahara. Abdul Jalil IV was a bendahara before the death of the sultan.

Though Johor has been ruled over by at least 20 sultans, Sultan Abu Bakar who reigned from 1862 to 1895, was the first sultan of the current ruling family, the House of Temenggong.[2] His father, Temenggong Daeng Ibrahim, managed to consolidate enough power to marginalize Sultan Ali who died in 1877.

The office of sultan is currently held by Sultan Ibrahim Ismail Ibni Almarhum Sultan Iskandar Al-Haj, who was proclaimed as the 25th Sultan of Johor on 23 January 2010 and crowned on 23 March 2015 at the Istana Besar, Johor Bahru. His father, Sultan Iskandar Al-Haj ibni Almarhum Sultan Ismail Al-Khalidi, a great-grandson of Sultan Abu Bakar died on 22 January 2010; the death was announced that night. Ibrahim Ismail, the Tunku Mahkota of Johor (Crown Prince of Johor), was appointed as the Pemangku Raja (Regent) of Johor on the same day. The funeral was held on 23 January after the proclamation of Sultan Ibrahim Ismail. 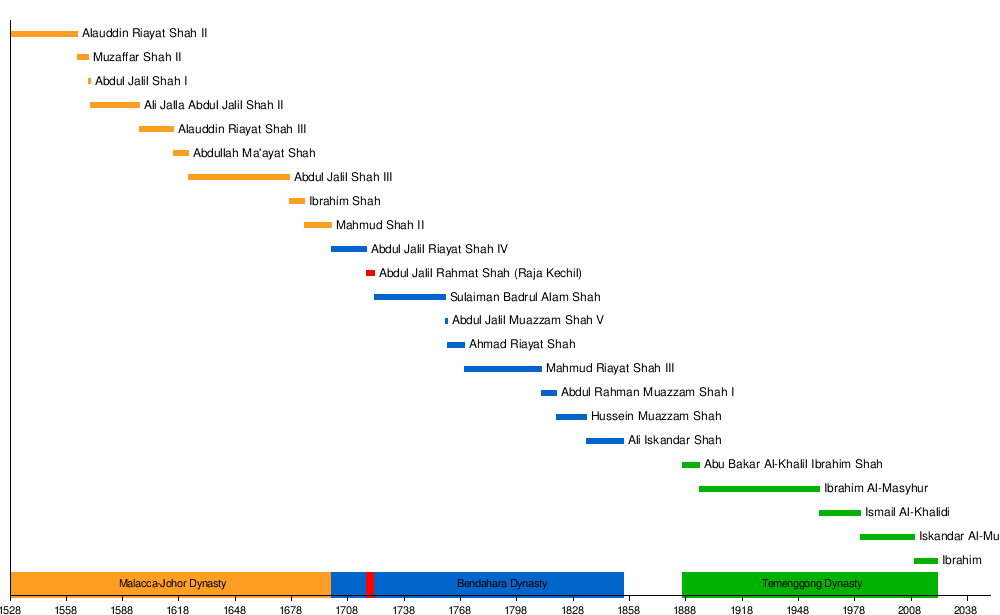