Tap dance is a form of dance characterized by using the sounds of tap shoes striking the floor as a form of percussion. Two major variations on tap dance exist: rhythm (jazz) tap and Broadway tap. Broadway tap focuses on dance; it is widely performed in musical theater. Rhythm tap focuses on musicality, and practitioners consider themselves to be a part of the jazz tradition.

The sound is made by shoes that have a metal "tap" on the heel and toe. There are different brands of shoes which sometimes differ in the way they sound. 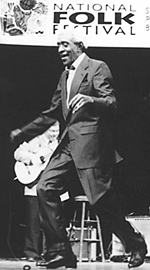 The fusion of several ethnic percussive dances, such as West African step dances and Scottish, Irish, and English clog dancing, hornpipes, and jigs, tap dance is believed to have begun in the mid-1800s during the rise of minstrel shows.[1]

As minstrel shows began to decline in popularity, tap dance moved to the increasingly popular Vaudeville stage. Due to Vaudeville's unspoken "two-colored rule", which forbade blacks to perform solo, many Vaudeville tap acts were duets.[2] One such duo was "Buck and Bubbles," which consisted of John "Bubbles" Sublett tap dancing and Ford "Buck" Washington playing a piano. The duo performed Class Act, a routine in which the performers wore tuxedos, effectively distinguishing them from the older minstrel show concept of tap dancers as "grinning-and-dancing clowns."[3]

Another notable figure during this period is Bill "Bojangles" Robinson, a protégé of Alice Whitman of The Whitman Sisters around 1904 (then known as "Willie Robinson").[4] Well versed in both Buck and Wing dancing and Irish Step dancing, Robinson joined the Vaudeville circuit in 1902 in a duo with George W. Cooper. The act quickly became famous, headlining events across the country, and touring England as well. In 1908, the partnership ended and Robinson began dancing solo, which was extremely rare for a black man at that time.[5] Despite this, he had tremendous success and soon became a world-famous celebrity.[2] He went on to have a leading role in many films, notably in the Shirley Temple franchise.

Shortly thereafter, the Nicholas Brothers came on the scene. Consisting of real life brothers Fayard and Harold, this team wowed audiences with their acrobatic feats incorporated into their classy style of dancing. A notable scene in the movie "Stormy Weather" features the pair dancing up a staircase and then descending the staircase in a series of leapfrogs over each other into a full split from which they rise with no hands.[6]

During the 1930s tap dance mixed with Lindy Hop. "Flying swing outs" and "flying circles" are Lindy Hop moves with tap footwork. In the mid- to late 1950s, the style of entertainment changed. Jazz music and tap dance declined, while rock and roll and the new jazz dance emerged. What is now called jazz dance evolved out of tap dance, so both dances have many moves in common. But jazz evolved separately from tap dance to become a new form in its own right. Well-known dancers during the 1960s and 1970s included Arthur Duncan and Tommy Tune.[citation needed]

(video) A man practices tap dancing in front of a station in Japan.

Tap dancers make frequent use of syncopation. Choreography typically starts on the eighth or first beat count. Another aspect of tap dancing is improvisation. Tap dancing can either be done with music following the beats provided, or without musical accompaniment; the latter is known as "a cappella" tap dancing.

Hoofers are tap dancers who dance primarily "closer to the floor", using mostly footwork and not showing very much arm or body movement.[8] This kind of tap dancing, also called rhythm tap, was employed by slaves in America.[9]

Early tappers like Fred Astaire provided a more ballroom look to tap dancing, while Gene Kelly introduced ballet elements and style into tap. This style of tap led to what is today known as Broadway style, which is popular in American culture. It often involves high heeled tap shoes and show music, and is usually the type of tap first taught to beginners. Examples of this style are found in Broadway musicals such as Anything Goes and 42nd Street.

Tap dancing can also be done using an a cappella method, in which no musical accompaniment is provided and dancers create their own "music" through the sounds of their taps.

In group tap dances, the steps are typically kept simple and easy to control. The group of dancers must keep their steps at the correct speed to be in sync.

"Soft-Shoe" is a rhythm form of tap dancing that does not require special shoes, and though rhythm is generated by tapping of the feet, it also uses sliding of the feet (even sometimes using scattered sand on the stage to enhance the sound of sliding feet) more often than modern rhythm tap. It preceded what is currently considered to be modern tap, but has since declined in popularity.[citation needed]

In the earliest years of tap dancing, tap shoes often had wooden soles,[10] but most tap shoes since have had leather soles. There are a variety of styles of shoe, the Oxford shoe being very common in jazz dance, and Mary Jane (shoe) is common for younger girls in tap classes.

Depending on manufacturer and model, tap characteristics can vary considerably. For example, some taps have relatively low weight and small footprint whereas others may be thicker and fill out the edge of the shoe more, making them heavier as a result. A tap's "tone" is influenced by its weight as well as its surface shape, which may be concave or convex.[11] The tonal quality of a tap can also be influenced by the material it is made from,[12] and the presence of a soundboard though there is some debate whether this affects the sound.

Taps are mounted to the sole of the shoe with screws, and sometimes adhesive as well. The screws are driven into a soundboard – a thin fiberboard integrated into the sole that can be firmly "gripped" by the screws – to reliably attach the tap to the shoe. When no adhesive is used, the screws can be loosened or tightened to produce different sounds, whereas tonal quality is fixed when adhesive is used.