During the summer months, the D&B performs in conjunction with "The President's Own" in the traditional Friday Evening Parades at the Marine Barracks Washington and in the Sunset Parades at the Marine Corps War Memorial (Iwo Jima Monument) in Arlington, Virginia, every Tuesday evening. The parades are not street parades, but military parades consisting of ceremonial pomp that are symbolic of Marine professionalism, discipline, and esprit de corps.[2]

Captain Nathan D. Morris is the seventh and current director of "The Commandant's Own" The United States Drum & Bugle Corps, serving in this position since February 2022. Chief Warrant Officer 2 Courtney R. Lawrence is the Executive Officer and Assistant Director. Master Gunnery Sergeant Keith G. Martinez is the twenty-second and current Drum Major. As of 2022, Master Sergeant Joshua Dannemiller is the Assistant Drum Major.[1]

"The Commandant's Own" The United States Marine Drum & Bugle Corps with then President George W. Bush while in France.

The unit's history traces to the early days of the Marine Corps. In the 18th and 19th centuries, military musicians ("field musics") provided a means of passing commands to Marines in battle. The sound of various drum beats and bugle calls that could be heard over the noise of the battlefield signaled Marines to attack the enemy or retreat. Through the 1930s, Marine Corps posts still authorized several buglers and drummers to play the traditional calls and to ring a ship's bell to signal the time. Until the 1960s, Marine Corps units sported unit drum and bugle corps within their respective rosters.

"The Commandant's Own" The United States Marine Drum & Bugle Corps, the only such formation within the Armed Forces today, was formed in 1934 at historic Marine Barracks Washington to augment the United States Marine Band "The President's Own". The unit provided musical support to ceremonies around the nation's capital. It was additionally tasked with presidential support duties during World War II. For this additional role, they were awarded the scarlet and gold breast cord by President Franklin Delano Roosevelt, which remains on the uniform. When the war ended, the United States Drum and Bugle Corps resumed performing at various military and public ceremonies.

In the early 1950s, the unit gained considerable acclaim performing for an increasing number of civilian audiences. Originally their instrumentation was similar to the other drum and bugle corps of the era. It has evolved along with the civilian corps, adapting trends after they have become established by the civilian corps. Music composed specifically for their unique selection of instruments helped establish their reputation for excellence during this period. These factors also led to the unit's formal designation as "The Commandant's Own", a title noting their unique status as musicians for the Commandant of the Marine Corps.

In 1968, Truman Crawford, formerly of the United States Air Force Drum and Bugle Corps, became a musical arranger and instructor for The Commandant's Own. During his 30-year career, he had a significant impact on the D&B comparable to that of John Philip Sousa on the United States Marine Band. The new rehearsal facility of "The Commandant's Own" at Marine Barracks Washington is named Truman Crawford Hall in his honor.[3]

Like the United States Marine Band, prior to enlisting each potential member of the Drum and Bugle Corps, all must pass a competitive audition. Unlike members of the President's Own, Drum and Bugle Corps members do undergo Marine Corps Recruit Training, where they are trained in basic infantry tactics.[4] 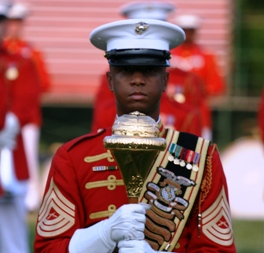 The brass played by "The Commandant's Own" are bugles pitched in G. Additionally, their bugles are two-valved models similar to those used by drum corps in the United States and Canada prior to 1990. The D&B's current inventory of brass instrumentation was manufactured by the Kanstul Musical Instruments company in 2006.[1]