William Cavendish, 1st Duke of Newcastle upon Tyne KG KB PC (c. 16 December 1593 – 25 December 1676), was an English courtier and supporter of the arts. He was a renowned horse breeder, as well as being patron of the playwright Ben Jonson, and the intellectual group known as the Welbeck Circle.

Despite spending the then enormous sum of £15,000 entertaining Charles I in 1634, he failed to gain a significant political post. In the early stages of the First English Civil War, he was appointed Royalist Captain-General in Northern England; he financed much of the war effort himself, later claiming this totalled in excess of £1,000,000. After the defeat at Marston Moor in July 1644, a battle fought against his advice, he went into exile in Europe.

He returned to England after the 1660 Restoration; although created Duke of Newcastle in 1665, he remained on the fringes of the court, and became critical of Charles II. He died in 1676, and was buried in Westminster Abbey.[1]

William Cavendish was born at Handsworth Manor, Yorkshire, eldest surviving son of Sir Charles Cavendish and Catherine Ogle. He was a grandson of Bess of Hardwick, and courtier William Cavendish. He had a younger brother Charles (1594–1654), and the two remained close friends throughout their lives.[2]

He was created a Knight of the Bath (KB) in 1610 and sat in the House of Commons as the member for East Retford in the Addled Parliament of 1614. He succeeded his father in 1617.[4]

On 3 November 1620 Cavendish was created 'Viscount Mansfield', then 'Earl of Newcastle-upon-Tyne' in 1628. In 1629 he inherited his mother's barony of Ogle, together with an estate of £3,000 per annum. In 1638 he became governor of Charles, Prince of Wales, and in 1639 a Privy Counsellor. When the Scottish war (1639–1640) broke out he assisted King Charles I with a loan of £10,000 and a troop of volunteer horse, consisting of 120 knights and gentlemen. He was appointed Gentleman of the Robes in 1641, but was implicated in the Army Plot, and in consequence withdrew for a time from the court.[5]

As tension increased, both Charles and Parliament tried to secure key ports and weapons; an attempt by Newcastle to capture Hull in July failed. When Charles formally declared war in August, Newcastle was given command of the four northern counties, largely because he was willing to pay for his own troops. In November 1642, he advanced into Yorkshire, raised the siege of York, and forced Lord Fairfax to retire after attacking him at Tadcaster.[5]

Fighting continued during the winter, as Newcastle tried to secure a landing place for an arms convoy organised by Henrietta Maria, who was in the Dutch Republic purchasing weapons. He had insufficient troops to hold the entire area, and Parliamentary forces under Lord Fairfax and his son Sir Thomas, retained key towns like Hull, and Leeds. In late February 1643, a convoy with Henrietta Maria and weapons landed at Bridlington, and was escorted to Oxford. Combined with a victory at Adwalton Moor near Leeds in June, he was created 'Marquess of Newcastle-upon-Tyne'.[6]

The 1643 Solemn League and Covenant had created a Committee of Both Kingdoms, which for the first time co-ordinated Parliamentary strategy in all three war zones, England, Scotland and Ireland. In February 1644, the Scots under Leven besieged Newcastle, closing the major import point for Royalist war supplies. They made little progress, with the Marquess-based nearby at Durham.[7]

Two weeks later, the Earl of Manchester defeated a Royalist force at Selby. Newcastle had to leave Durham, and garrison York, which city was besieged by the Scots, Sir Thomas Fairfax, and Manchester's Army of the Eastern Association.[8] In May, Prince Rupert left Shrewsbury, and marched north; on 29 June, he arrived at Knaresborough, 30 kilometres from York, to find he was faced by a superior force.[9] Despite Newcastle's opposition, the largest battle of the war took place on 2 July, at Marston Moor. The result was a decisive Royalist defeat that lost them the North, while York surrendered on 16 July.[10] 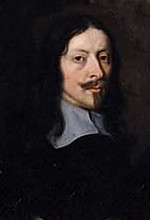 Newcastle served as Royalist Captain-General from 1642 to 1644.

As a military commander, Lord Clarendon described Newcastle as "fit to be a general as a bishop". However, Marston Moor was fought against his advice, while he was also intelligent enough to understand his limits, and recruited reliable subordinates.[11] After Marston Moor, Newcastle left England for Hamburg, accompanied by his two sons and his brother Charles; in April 1645, they moved to Paris, where he met and married his second wife Margaret, maid of honour to Queen Henrietta Maria. While there, Newcastle continued his feud with Prince Rupert, suggesting to the Queen he should be removed from command.[12]

The new Marchioness was a dramatist and romancer, and had been maid of honour to Queen Henrietta Maria. Their marriage appears to have been a very happy one, and she later wrote a biography of him. His love and admiration for his wife is best expressed in the fine sonnet he wrote as an introduction to her masterpiece The Blazing World.

Newcastle left in 1648 for Rotterdam with the intention of joining the Prince of Wales in command of the rebellious navy, and finally took up his abode at Antwerp, where he remained till the Restoration. In April 1650 he was appointed a member of Charles II's privy council, and in opposition to Edward Hyde advocated the agreement with the Scots. In Antwerp he lived in the Rubenshuis (the house where the painter Peter Paul Rubens had lived from 1610 till his death in 1640)[13] and established his famous riding-school, exercised "the art of manège" (High School riding), and published his first work on horsemanship, Méthode et invention nouvelle de dresser les chevaux in 1658.[5][2] This work had an influence on one of the greatest French riding masters, François Robichon de La Guérinière, as well as a more controversial figure in dressage, Baucher. He is also said to be the inventor of draw reins.

At the Restoration (1660) Newcastle returned to England, and succeeded in regaining the greater part of his estates, though burdened with debts, his wife estimating his total losses in the war at the enormous sum of £941,303.[14] He was reinstated in the offices he had filled under Charles I and appointed a Gentleman of the Bedchamber. He was invested in 1661 with the Order of the Garter which had been bestowed upon him in 1650, and was advanced to a dukedom (of Newcastle-on-Tyne) on 16 March 1665.[5]

He retired, however, from public life and occupied himself with his estate and with his favourite pursuit of training horses. He established a racecourse near Welbeck. In his later years, he suffered from Parkinson's disease, and the sudden death of his second wife was a blow from which he never recovered. With John Dryden's assistance he translated Molière's L'Etourdi as Sir Martin Mar-all (1688). He contributed scenes to his wife's plays, and poems of his composition are to be found among her works.[5]

Cavendish was the patron of, among others, Jonson, Shirley, Davenant, Dryden, Shadwell and Flecknoe, and of Hobbes, Gassendi and Descartes.[5] During their stay in Antwerp, the Cavendishes had a music chapel of 5 musicians. They were acquainted with several of the contemporary English composers, and Newcastle's library contained a substantial collection of music of these composers.[15]