The Bureau of Intelligence and Research (INR) is an intelligence agency in the United States Department of State.[2] Its central mission is to provide all-source intelligence and analysis in support of U.S. diplomacy and foreign policy.[3] INR is the oldest civilian element of the U.S. Intelligence Community and among the smallest, with roughly 300 personnel.[4] Though lacking the resources and technology of other U.S. intelligence agencies,[5] it is "one of the most highly regarded" for the quality of its work.[6][7]

INR is descended from the Research and Analysis Branch (R&A) of the World War II-era Office of Strategic Services (OSS), which was tasked with identifying the strengths and weaknesses of the Axis powers.[8] Widely recognized as the most valuable component of the OSS,[9] upon its dissolution in 1945, R&A assets and personnel were transferred to the State Department, forming the Office of Intelligence Research.[8] INR was reorganized into its current form in 1957.

In addition to supporting the policies and initiatives of the State Department, INR contributes to the President's Daily Briefings (PDB) and serves as the federal government's primary source of foreign public opinion research and analysis.[10] INR is primarily analytical and does not engage in counterintelligence or espionage, instead utilizing intelligence collected by other agencies, Foreign Service reports and open-source materials, such as news media and academic publications.[11] INR reviews and publishes nearly two million reports and produces about 3,500 intelligence assessments annually. 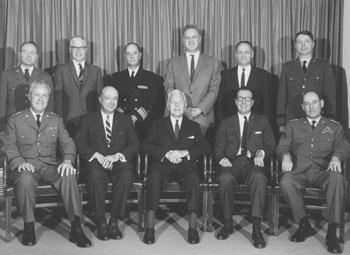 The United States Intelligence Board in 1965. Seated second from right is Thomas L. Hughes, then INR Director.

In May 2004, the National Security Archive released a highly classified review of INR's written analysis of the Vietnam War during the 1960s commissioned in 1969 by then-INR director Thomas L. Hughes. The review showed that INR had repeatedly warned of the weaknesses of the South Vietnamese Government and of the failing US strategy in Vietnam, and that, despite pressure from the military and Pentagon, INR had portrayed and projected the course of the war more accurately than any other source.

In June 2009, the Federal Bureau of Investigation (FBI) arrested former INR employee Walter Kendall Myers on charges of serving as an illegal agent of the Cuban government for nearly 30 years and conspiring to provide classified U.S. information to the Cuban government. Myers had worked in the INR from 2000 to 2007.[14] His arrest was the culmination of a three-year joint investigation by the FBI and the Department of State Diplomatic Security Service.

In July 2004, the United States Senate Select Committee on Intelligence issued a scathing report on prewar intelligence on Iraq. INR was spared the poor performance review that most other intelligence agencies received, and the panel specifically endorsed the dissent that INR inserted into the National Intelligence Estimate of 2002. The bureau is being studied as a positive example, as Congress debates how to best reform U.S. intelligence agencies in the wake of the 2003 invasion of Iraq.[15]

INR was the only US intelligence agency to dissent from the consensus that Kyiv would fall in a few days during the 2022 Russian invasion of Ukraine. Although it agreed with other agencies in overestimating Russian military capability, unlike the others INR used growing Ukrainian willingness to fight in opinion surveys to predict that the country would strongly resist the invasion.[16]

The primary mission of the INR is to provide all-source intelligence to support U.S. diplomats. This is achieved through all-source analysis, intelligence policy and coordination, polling and media analysis, and conferences and workshops to integrate outside expertise. As the nexus of intelligence and foreign policy, it plays a key role in ensuring that intelligence activities are consistent with U.S. foreign policy, and that other components of the Intelligence Community (IC) understand the information and analysis needs of senior foreign policy decision makers. INR's portfolio is as broad and diverse as the secretary's global agenda. As a result, INR employs experts who understand current policy concerns as well as the historical context to provide input to policymakers and timely guidance to the IC.

Officially, INR intelligence is aimed at ensuring that diplomats, policymakers, and other government officials have access to focused intelligence products that will help advance U.S. foreign policy, namely to build democracies, promote economic stability, provide humanitarian assistance, and combat terrorism, disease, and the proliferation of Weapons of Mass Destruction (WMD) around the world.

INR is the department's principal liaison with the Office of the Director of National Intelligence (ODNI). Since the creation of the ODNI, there have been many changes in the IC, including more attention to customer needs, new standards for information sharing, and initiatives regarding analytic standards. INR participates in a wide variety of working groups and committees on behalf of the Department of State, and INR analysts participate in the drafting of IC assessments and analyses.

Structure of the Bureau of Intelligence and Research as of 2008.

Office of the Executive Director (INR/PDAS/EX)

The Office of the Executive Director (INR/PDAS/EX) advises the assistant secretary and Principal Deputy Assistant Secretary on, and provides executive management and direction of:

INR/PDAS/EX liaises with the Office of the Director of National Intelligence (ODNI) on a variety of intelligence policy issues in the areas of:

INR/PDAS/EX serves as the INR coordinator for internal controls management, Department inspections and audits, and other reporting requirements.

The Office of Administrative Liaison (INR/PDAS/EX/AL)

The Office of Research (INR/PDAS/R)

The geographic offices are:

Office of Analysis for Africa (INR/AN/AA)

Responsible for East Asia and the Pacific.

Office of Analysis for Europe (INR/AN/EU)

Responsible for all European countries, including the Baltic States, but excluding other states that were formerly part of the Soviet Union.

Responsible for Latin America, the Caribbean, and Canada.

Responsible for the Near East, including North Africa and South Asia.

Office of Analysis for Russia and Eurasia (INR/AN/REA)

Responsible for Russia and Eurasia.

INR/AN/EC serves as the bureau lead on sanctions issues. INR/AN/EC provides support to the National Intelligence Council Committee on Foreign Investment in the United States (CFIUS).

Office of the Geographer and Global Issues (INR/AN/GGI)

The Office of the Geographer and Global Issues (INR/AN/GGI) produces intelligence analysis and assessments on humanitarian crises and multilateral interventions; international migration and refugee flows; the environment and sustainable development; tensions over natural resource scarcity and energy issues; boundary disputes and territorial claims; human rights abuses and war crimes; democracy promotion and elections; the activities of the United Nations and other international organizations;[18] and the impact of climate on national security.[19][20]

Office of Analysis for Terrorism, Narcotics, and Crime (INR/AN/TNC)

Office of Analysis for Strategic, Proliferation, and Military Issues (INR/AN/SPM)

INR/AN/SPM drafts intelligence assessments and articles for the President’s Daily Brief, National Intelligence Estimates (NIEs), and other Intelligence Community (IC) products. INR/AN/SPM collaborates with analysts in other IC agencies, U.S. Government experts, and outside experts on intelligence topics and countries.

The Office of Intelligence Resources (INR/IPC/IRE) coordinates actions within the department, with other Federal agencies, and with U.S. missions abroad on U.S. technical intelligence programs, operations, policies, and relations with foreign technical services. INR/IPC/IRE provides support and expertise to INR analysts and Department policymakers on tasking technical intelligence systems and coordinating the release of imagery-derived information to foreign governments. INR/IPC/IRE develops and represents the department's intelligence information needs in interagency forums concerned with requirements, collection, evaluations, and future architectures in signals, imagery, and measurement and signatures intelligence, as well as open-source information. INR/IPC/IRE provides staff support to INR principals for their participation in interagency mechanisms dealing with intelligence collection, prioritization, and resource issues. INR/IPC/IRE serves as the Executive Secretariat for the State Intelligence Policy Board.