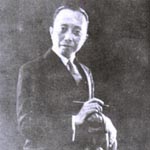 Li Jinhui, known as the father of Chinese pop

There are currently three main subgenres within C-pop: Cantopop, Mandopop and Hokkien pop. The gap between Cantopop and Mandopop has been narrowing in the new millennium. Hokkien pop, initially strongly influenced by Japanese enka, has been re-integrating into C-pop and narrowing its trend of development towards Mandopop.[citation needed]

Chinese popular music was initially a vehicle for the Cultural Revolution and Maoist ideologies; however, during the country's extensive political and cultural changes of the past 50 years, it has lost much political significance; and now closely resembles the styles of K-pop and J-pop, from South Korea and Japan, respectively.[citation needed] The term shidaiqu (meaning "music of the era" or "popular music") is used to describe all different types of music sung in Mandarin and other Chinese dialects recorded in China from 1920 to 1952, then in Hong Kong until the 1960s. Shanghai was the main hub of the Chinese popular music recording industry, and an important name of the period is composer Li Jinhui. Buck Clayton is credited with bringing American jazz influence to China and the music gained popularity in hangout quarters of nightclubs and dancehalls of major cities in the 1920s. A number of privately run radio stations from the late 1920s to the 1950s played C-pop.[1] Around 1927, Li Jinhui composed "The Drizzle" ("毛毛雨") sung by his daughter Li Minghui (黎明暉), and this song is generally regarded as the first Chinese pop song.[2][3][4] It fuses jazz and Chinese folk music – the tune is in the style of a traditional pentatonic folk melody, but the instrumentation is similar to that of an American jazz orchestra.[5]

Around the time of the Japanese invasion of Manchuria, and the Chinese Civil War, pop music was seen as a leftist undisturbed distraction. After the Second Sino-Japanese War and World War II C-pop has been marketed, produced and branded regionally. The Communist Party of China established the People's Republic of China in 1949. One of its first actions was to label the genre "Yellow Music" (the color is associated with pornography). The Shanghai pop music industry then took pop music to Hong Kong and in the 1970s developed cantopop. The Kuomintang, relocated to Taiwan, discouraged the use of native Taiwanese Hokkien dialect from the 1950s to the late 1980s. As a result, mandopop became the dominant musical genre in Taiwan.

In August 2008 Norman Cheung, father of HK singer Ronald Cheng, acquired the remaining portion of EMI Music Asia when EMI, which had entered China in the early 20th century, withdrew from the Chinese market. Typhoon music made the purchase for an estimated HK$100 million.[7][8]

In February 2008 mainland China's top search engine Baidu.com was sued by local industry groups for providing music listening, broadcasting and downloading without approval.[9] Piracy continues to exist in China[10] but Google have since announced a cooperation deal offering free listening and genuine music copies. Top100.cn was founded by basketball star Yao Ming, agent Zhang Mingji and music insider Chen Ge via a 20 million yuan investment.[11] Google mp3 became available in March 2009.[12] The future of C-pop in mainland China is slowly emerging. However, the Chinese government's banning of the highly popular show Super Girl for one year in 2008 and 2012 still a very controversial for the mainland China market.[13]

In the early years of modern mainland China, emphasis on collectivist and party values, would predominantly set the theme for the music that was produced. Chinese officially sanctioned music schools, teaching popular music usually involves praising China's national culture through song lyrics that echo the official orientation of the PRC. The way in which popular music is taught in the school system relates to Chinese patriotic verses and traditional Chinese culture. The educational policy is heavily influenced by the government, and the "... Chinese government still uses traditional Chinese culture and values to enhance its legitimacy and consolidate its authority"[14] (Ho, 2012, p1).

After the Cultural Revolution that isolated China from the rest of the world for more than a decade, the country opened up, especially under the leadership of premier Deng. Global economic development offered all sorts of opportunities for Chinese businessmen and the opening up of east coast regions to outside economic interests served to boost significantly cross-cultural exchange between China and other nations, including the United States. Globalization and China's joining the World Trade Organization, with the implication of a move to make institutions within the country more compatible with those of the rest of the world, and the surge in international trade all contributed to bringing not only increased economic activity but also social exposure to foreign cultural standards. Although the new openness affected relations with a broad range of foreign countries, the United States was especially important as it was a major trading partner, and globalization has helped both nations to develop a healthy relationship for future growth.

The openness to trade and other exchanges with the United States, including the growing number of Chinese students seeking admission to educational establishments in the US, facilitated familiarity with American popular music. Although this was not the first exposure to foreign music for China, as there had been a growing awareness of the unique brand of western influenced popular music in Hong Kong, known as Cantopop, the influences of American rock, and African American rebellious hip hop and rap music were undoubtedly a lot more accepted by Chinese youth compared to their parent's generation. Nowadays mainland singers like Hua Chenyu, one of the most influential young pop-rock singers in China today, sold out an Olympic sized stadium concert in two minutes and 58 seconds, demonstrating the homegrown pop music of China are at the stage of strong mass appeal.[15][16] (Rupke & Blank, 2009). The globalization of popular music impacted other East Asian countries, especially Korea and Japan, and this in turn has influenced developments in China, as "pop-culture excursions between (the) three countries"[17] are deemed significant (Tricks, 2014, p. 4).

At the end of 2007 RTHK began promoting a tribute called "Immortal Legends" (不死傳奇) in honor of the singers who died a legend in the industry. The honor was given to Roman Tam, Anita Mui, Teresa Teng, Leslie Cheung, Wong Ka Kui (founder of Beyond), and Danny Chan.[19] All six pop stars played a major role in developing the Hong Kong or Taiwan music industry.