Prefecture and commune in Normandy, France

listen); Norman: Kaem) is a commune in northwestern France. It is the prefecture of the department of Calvados. The city proper has 105,512 inhabitants (as of 2018[update]), while its functional urban area has 470,000,[3] making Caen the second largest urban area in Normandy and the 19th largest in France.[4] It is also the third largest commune in all of Normandy after Le Havre and Rouen.[5][6]

It is located 15 kilometres (9.3 miles) inland from the English Channel, 200 kilometres (120 miles) north-west of Paris, and connected to the south of England by the Caen (Ouistreham) to Portsmouth ferry route. Caen is located in the centre of its northern region, and it is a centre of political, economic, and cultural power. Located a few miles from the coast, the landing beaches, the bustling resorts of Deauville and Cabourg, as well as Norman Switzerland and Pays d'Auge, Caen is often considered the archetype of Normandy.

Caen is known for its historical buildings built during the reign of William the Conqueror, who was buried there, and for the Battle for Caen, heavy fighting that took place in and around Caen during the Battle of Normandy in 1944, destroying much of the city. The city has now preserved the memory by erecting a memorial and a museum dedicated to peace, the Mémorial de Caen.

The first references to the name of Caen are found in different acts of the dukes of Normandy: Cadon 1021/1025,[7] Cadumus 1025,[8] Cathim 1026/1027.[9] Year 1070 of the Parker manuscript[10] of the Anglo-Saxon Chronicle refers to Caen as Kadum,[11] and year 1086 of the Laud manuscript[12] gives the name as Caþum.[13] Despite a lack of sources as to the origin of the settlements, the name Caen would seem to be of Gaulish origin, from the words catu-, referring to military activities and magos, field, hence meaning "manoeuvre field" or "battlefield".[14] In Layamon's Brut, the poet asserts that King Arthur named the city in memory of Sir Kay.[15]

Caen was known in Roman times as 'Catumagos', from the Gaulish roots magos meaning 'field' and catu meaning 'combat'. It remained a minor settlement throughout the Roman period and began to see major development commence in the 10th century, under the patronage of the Dukes of Normandy. Around 1060, William the Conqueror began construction of the Château de Caen, which became the centre of the ducal court. Duchess Matilda of Flanders also founded the Benedictine Abbey of Sainte-Trinité, Caen around the same time, eventually being buried in the abbey. Caen succeeded Bayeux as the capital of Lower Normandy, complementing the second ducal capital of Rouen.

Caen fell to Philip II of France on 21 May 1204, and was incorporated along with the remainder of Normandy into the Kingdom of France.

In 1346, King Edward III of England led his army against the city, hoping to loot it. It was expected that a siege of perhaps several weeks would be required, but the army took the city in less than a day, on 26 July 1346, storming and sacking it, killing 3,000 of its citizens, and burning much of the merchants' quarter on the Île Ste-Jean. Only the castle of Caen held out, despite attempts to besiege it. A few days later, the English left, marching to the east and on to their victory at the Battle of Crécy. It was later captured following a siege by Henry V in 1417 and treated harshly for being the first town to put up any resistance to his invasion. In 1450 towards the end of the war, French forces recaptured Caen.

During the Battle of Normandy in the Second World War, Caen was taken back from German forces in early July, a month after the Normandy landings, particularly those by British I Corps on 6 June 1944. British and Canadian troops had intended to capture the town on D-Day. However they were held up north of the city until 9 July, when an intense bombing campaign during Operation Charnwood destroyed 70% of the city and killed 2,000 French civilians.[16] The Allies seized the western quarters, a month later than Field Marshal Montgomery's original plan. During the battle, many of the town's inhabitants sought refuge in the Abbaye aux Hommes ("Men's Abbey"), built by William the Conqueror some 800 years before. The spire of the Church of Saint-Pierre and the university were destroyed by British and Canadian bombing.

Postwar work included the reconstruction of complete districts of the city and the university campus. It took 14 years (1948–1962) and led to the current urbanization of Caen. Having lost many of its historic quarters and its university campus in the war, Caen does not have the atmosphere of a traditional Norman town such as Honfleur, Rouen, Cabourg, Deauville or Bayeux.

The Canadian Army Film and Photo Unit filmed the D-Day offensive and Orne breakout several weeks later. It returned several months later to document the city's recovery efforts. The resulting film, You Can't Kill a City, is preserved in the National Archives of Canada.

Caen is in an area of high humidity. The river Orne flows through the city, as well as small rivers known as les Odons, most of which have been buried under the city to improve urban hygiene. Caen has a large flood zone, named "La prairie", located around the hippodrome, not far from the river Orne, which is regularly submerged.[17][18]

Caen is 10 kilometres (6.2 miles) from the Channel. A canal (Canal de Caen à la Mer) parallel to the Orne was built during the reign of Napoleon III to link the city to the sea at all times. The canal reaches the English Channel at Ouistreham. A lock keeps the tide out of the canal and lets large ships navigate up the canal to Caen's freshwater harbours.

The castle, Château de Caen, built circa 1060 by William the Conqueror, who successfully conquered England in 1066, is one of the largest medieval fortresses of Western Europe. It remained an essential feature of Norman strategy and policy. At Christmas 1182, a royal court celebration for Christmas in the aula of Caen Castle brought together Henry II and his sons, Richard the Lionheart and John Lackland, receiving more than a thousand knights. Caen Castle, along with all of Normandy, was handed over to the French Crown in 1204. The castle saw several engagements during the Hundred Years' War (1346, 1417, 1450) and was in use as a barracks as late as the Second World War. Bullet holes are visible on the walls of the castle where members of the French Resistance were shot during the Second World War. Today, the castle serves as a museum that houses the Musée des Beaux-Arts de Caen (Museum of Fine Arts of Caen) and Musée de Normandie (Museum of Normandy) along with many periodical exhibitions about arts and history. (See "Timeline of Caen Castle". Archived from the original on 13 February 2006. Retrieved 28 August 2004.)

In repentance for marrying his cousin Mathilda of Flanders, William ordered two abbeys to be built on the Pope's encouragement: 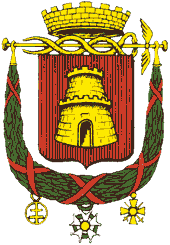 The coat of arms of Caen

Mayors of Caen have included:

Joël Bruneau was re-elected mayor in the 2020 municipal elections.[1]

In the former administrative organisation, Caen was a part of 9 cantons, of which it was the chief town. These cantons contained a total of 13 towns. Caen gave its name to a 10th canton, of which it was not part. Since the 2015 canton reorganization, Caen is part of the cantons of Caen-1, 2, 3, 4 and 5.[24]

This section needs additional citations for verification. Please help improve this article by adding citations to reliable sources. Unsourced material may be challenged and removed.Find sources: "Caen" – news · newspapers · books · scholar · JSTOR (December 2020) (Learn how and when to remove this template message)

Twisto is the urban transport network of Caen, including about sixty bus lines and 3 tramway lines.[25]

Caen station is the second busiest in Normandy, after Rouen station.

Caen - Carpiquet Airport is the biggest airport in Normandy considering the number of passengers and flights that it serves every year. Most flights are operated by HOP!, Volotea and the French national airline Air France operates flights to the French cities of Lyon, Nice, Toulouse, Montpellier, Marseille, Biarritz, Ajaccio, Figari, Bastia and Calvi.[28]

Caen is served by the large port of Ouistreham, lying at the mouth of the Caen Canal where it meets the English Channel. A cruise/ferry service operates between Portsmouth, England, and Caen/Ouistreham running both standard roll-on-roll-off car ferries and supercat fast ferries, with the latter making crossing from March to November. The ferry terminal is 15 kilometres (9.3 miles) from Caen with a daytime shuttle bus service for foot passengers. There is also a cyclist road from Caen to Ouistreham.[29]

Caen is connected to the rest of France by motorways to Paris (A13), Brittany and Southern France (A84) and to Le Mans and central France (A88–A28). The A13 and A88 are toll roads while the A84 is a toll-free motorway. The city is encircled by the N814 ring-road (Boulevard Périphérique) that was completed in the late 1990s. The N13 connects Caen to Cherbourg and to Paris. A section of the former N13 (Caen-Paris) is now D613 (in Calvados) following road renumbering. The Boulevard Périphérique includes an impressive viaduct called the Viaduc de Calix that goes over the canal and River Orne. The canal links the city to the sea to permit cargo ships and ferries to dock in the port of Caen. Ferries which have docked include the Quiberon and the Duc de Normandie.

The agricultural and food-processing Agrial cooperative has its head office on Caen. Agrial group processes vegetables, cider apples, milk, poultry and meat with the help of its 12,000 employees and all its partners.[31]

The Théâtre de Caen (1963) is the home of the Baroque musical ensemble Les Arts Florissants. The organization was founded by conductor William Christie in 1979 and derives its name from the 1685 opera by Marc-Antoine Charpentier.

Caen was the birthplace or origin of:

Gules, a single-towered open castle Or, windowed and masoned sable.

Under the Ancien Régime: Per fess, gules and azure, 3 fleurs de lys Or.

During the First French Empire: Gules, a single-towered castle Or, a chief of Good Imperial Cities (gules, 3 bees Or).

Today, Caen has no motto, but it used to have one, which did not survive the French Revolution. As a result, its spelling is archaic and has not been updated:[53]

This motto is reflected in a notable old Chant royal.[54]

Caen has an oceanic climate that is somewhat ameliorated due to its slightly inland position. In spite of this, summers are still cool by French standards and the climate is typically maritime in terms of high precipitation, relatively modest sunshine hours and mild winters.

Wikimedia Commons has media related to Caen.
Cities in France by population
Prefectures of the departments of France
Communes of the Calvados department
Authority control
Categories
Categories: