Declaration of Independence is a 12-by-18-foot (3.7 by 5.5 m) oil-on-canvas painting by the American artist John Trumbull depicting the presentation of the draft of the Declaration of Independence to Congress. It was based on a much smaller version of the same scene, presently held by the Yale University Art Gallery.[1] Trumbull painted many of the figures in the picture from life, and visited Independence Hall to depict the chamber where the Second Continental Congress met. The oil-on-canvas work was commissioned in 1817, purchased in 1819, and placed in the United States Capitol rotunda in 1826.

The painting shows 42 of the 56 signers of the Declaration; Trumbull originally intended to include all 56 signers but was unable to obtain likenesses for all of them. He also depicted several participants in the debate who did not sign the document, including John Dickinson, who declined to sign. Trumbull had no portrait of Benjamin Harrison V to work with, but his son Benjamin Harrison VI was said to resemble his father, so Trumbull painted him instead. Similarly, Trumbull painted Rufus Hopkins, who resembled his father Stephen Hopkins, for whom no portrait was available. As the Declaration was debated and signed over a period of time when membership in Congress changed, the men featured in the painting never were in the same room at the same time.

Although Thomas Jefferson appears to be stepping on John Adams' shoe in the painting, which many thought symbolized their relationship as friendly rivals, upon closer examination it can be seen that their feet are merely close together. This part of the image was correctly depicted on the two-dollar bill version.

On the farthest wall hangs a display of trumpets, drum, and regimental colours captured from British regiments. This is not depicted in all versions, most notably the one seen on the two-dollar bill.

Key to historical figures depicted in the painting 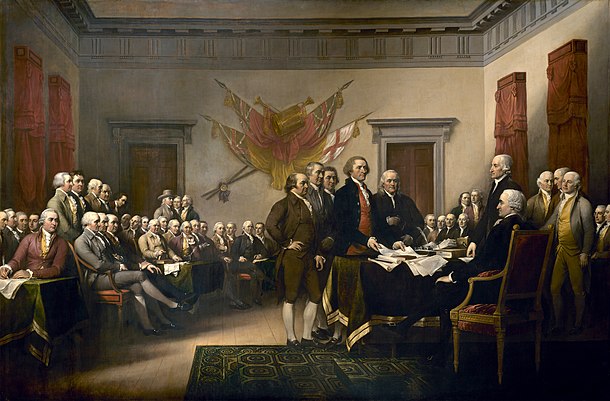 Clickable image: Point at a face to identify the person, click to go to the corresponding article.

Click anywhere else in the image to go to the image's file page and view a larger version. U.S. government's key to the painting

The key to the 47 figures in the painting follows the numbering used by the U.S. government publication "Art of the Capitol" (in the illustration of the key shown in this section) but provides a different (hopefully clearer) description of which figure is where in the painting, so numbers are not entirely in order.

Key to figures (in each group, listed from left to right):

Seated at the table on the left:

Seated together to the right of Harrison and in front of the standing figures:

Five figures standing together on the left:

Three seated figures in the back between the two sets of standing figures:

Set of three figures standing together in the back:

Five figures standing in front (the Committee of Five):

Four background figures seated together near the right corner of the room:

Two figures standing in the right corner of the room:

- Not a signer of the final Declaration of Independence but depicted in painting. Although Charles Thomson was one of two members listed by name in the earlier Dunlap Broadside as having attested to the Declaration, and many historians believe he had signed the original document that was lost. Clinton was not present at the signing of the Declaration.)

There were 14 signers of the Declaration who did not appear in the painting:

On U.S. currency and postage stamps Trumbull's Declaration of Independence signing scene painting has been depicted several times on United States currency and postage stamps. It was first used on the reverse side of the $100 National Bank Note that was issued in 1863.[3] The depiction was engraved by Frederick Girsch of the American Bank Note Company.[4] The same steel engraving was used on the 24¢ stamp issued six years later as part of the 1869 pictorial series of definitive U.S. postage stamps.[5]

Trumbull's painting is presently depicted on the reverse of the two-dollar bill. Featured in it are 40 of the 47 figures from Trumbull's painting. Cut out from the scene are: the farthest four figures on the left—George Wythe, William Whipple, Josiah Bartlett, and Thomas Lynch, Jr.; the farthest two figures on the right—Thomas McKean and Philip Livingston; and one of three figures seated in the left rear—George Walton. Additionally, two unrecognized figures were added: one in between Samuel Chase and Lewis Morris and another between James Wilson and Francis Hopkinson, bringing the total number of figures shown in this presentation scene to 42. In 2017, the company Ancestry.com restaged the painting with the 29 living descendants of the men depicted in Trumbull's painting as part of an advertising campaign called “Declaration Descendants".[6][7] The campaign included two short films and ran on digital and social media platforms. Shannon Lanier, a descendant of Thomas Jefferson, said: “When you see the new picture, the new image, it’s a picture of diverse people. Black, white, Hispanic, Native American—a little bit of everything—Asian, and that’s more of a representation of this country.”[8]

In the 2008 HBO miniseries John Adams, in one of the final scenes of the series, the painter John Trumbull is showing his massive mural to an elderly John Adams for his approval. While staring at the painting Adams mentions, "They're all dead ... except me and Jefferson." He then expresses to Trumbull his disapproval of the work. This leads to a brief argument between the men about the difference between artistic license and historical accuracy. The scene itself is entirely fictional, but serves as a warning towards the fictionalization of the past itself with Adams stating "It is very bad history".[9]

Keys to the figures