Primitive drip irrigation has been used since ancient times. Fan Shengzhi shu, written in China during the first century BCE, describes the use of buried, unglazed clay pots filled with water, sometimes referred to as Ollas, as a means of irrigation.[1][2]

The research was later expanded in the 1920s to include the application of perforated pipe systems.[4]

Australia: use of plastic

The usage of plastic to hold and distribute water in drip irrigation was later developed in Australia by Hannis Thill.[4]

Usage of a plastic emitter in drip irrigation was developed in Israel by Simcha Blass and his son Yeshayahu.[5] Instead of releasing water through tiny holes easily blocked by tiny particles, water was released through larger and longer passageways by using friction to slow water inside a plastic emitter. The first experimental system of this type was established in 1959 by Blass, who partnered later (1964) with Kibbutz Hatzerim to create an irrigation company called Netafim. Together they developed and patented the first practical surface drip irrigation emitter.[3][4]

In the United States, the first drip tape, called Dew Hose, was developed by Richard Chapin of Chapin Watermatics in the early 1960s.[6][7][8] The evolution of drip tape which made drip tape adopted and used at a big scale was the introduction of T-Tape in 1987 by Plastro Irrigation, that had the first slit outlet and a laminar flow track which later evolved into a turbulent flow regulating flow track. Chapin Watermatics was acquired by Jain Irrigation in 2006 and is housed under its US subsidiary Jain Irrigation Inc, USA.[9][10][11]

A trickle ring is a circular device which evenly distributes water around the base of a tree or shrub. Connected to a water supply by a garden hose or tubing adapter fitting, trickle rings may be integrated into an irrigation network which waters many plants at the same time. By regulating the flow of water through the trickle ring, soil can be saturated at a rate which conserves water by minimizing wasteful surface runoff and losses due to evaporation.[citation needed]

Modern drip irrigation has arguably become the world's most valued innovation in agriculture since the invention in the 1930s of the impact sprinkler, which offered the first practical alternative to surface irrigation.

Careful study of all the relevant factors like land topography, soil, water, crop and agro-climatic conditions are needed to determine the most suitable drip irrigation system and components to be used in a specific installation. [13]

Drip irrigation may also use devices called micro-spray heads, which spray water in a small area, instead of dripping emitters. These are generally used on tree and vine crops with wider root zones.

Subsurface drip irrigation (SDI) uses permanently or temporarily buried dripperline or drip tape located at or below the plant roots. It is becoming popular for row crop irrigation, especially in areas where water supplies are limited, or recycled water is used for irrigation.

As of 2012, China and India were the fastest expanding countries in the field of drip- or other micro-irrigation, while worldwide well over ten million hectares used these technologies.[14] Still, this amounted to less than 4 percent of the world's irrigated land.[14] That year, Israel's Netafim was the global market leader (a position it maintained in 2018[15]), with India's Jain Irrigation being the second-biggest micro-irrigation company.[14] In 2017 Rivulis bought Eurodrip and became the world's second largest irrigation systems manufacturer.[16] 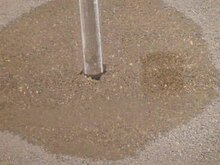 Horticulture drip emitter in a pot

Components used in drip irrigation (listed in order from water source) include:

In drip irrigation systems, pump and valves may be manually or automatically operated by a controller.

Most large drip irrigation systems employ some type of filter to prevent clogging of the small emitter flow path by small waterborne particles. New technologies are now[when?] being offered that minimize clogging. Some residential systems are installed without additional filters since potable water is already filtered at the water treatment plant. Virtually all drip irrigation equipment manufacturers recommend that filters be employed and generally will not honor warranties unless this is done. Last line filters just before the final delivery pipe are strongly recommended in addition to any other filtration system due to fine particle settlement and accidental insertion of particles in the intermediate lines.

Drip and subsurface drip irrigation is used almost exclusively when using recycled municipal wastewater. Regulations typically do not permit spraying water through the air that has not been fully treated to potable water standards.

Because of the way the water is applied in a drip system, traditional surface applications of timed-release fertilizer are sometimes ineffective, so drip systems often mix liquid fertilizer with the irrigation water. This is called fertigation; fertigation and chemigation (application of pesticides and other chemicals to periodically clean out the system, such as chlorine or sulfuric acid) use chemical injectors such as diaphragm pumps, piston pumps, or aspirators. The chemicals may be added constantly whenever the system is irrigating or at intervals. Fertilizer savings of up to 95% are being reported from recent university field tests using drip fertigation and slow water delivery as compared to timed-release and irrigation by micro spray heads.

Properly designed, installed, and managed, drip irrigation may help achieve water conservation by reducing evaporation and deep drainage when compared to other types of irrigation such as flood or overhead sprinklers since water can be more precisely applied to the plant roots. In addition, drip can eliminate many diseases that are spread through water contact with the foliage. Finally, in regions where water supplies are severely limited, there may be no actual water savings, but rather simply an increase in production while using the same amount of water as before. In very arid regions or on sandy soils, the preferred method is to apply the irrigation water as slowly as possible.

Pulsed irrigation is sometimes used to decrease the amount of water delivered to the plant at any one time, thus reducing runoff or deep percolation. Pulsed systems are typically expensive and require extensive maintenance. Therefore, the latest efforts by emitter manufacturers are focused on developing new technologies that deliver irrigation water at ultra-low flow rates, i.e. less than 1.0 L (2.1 US pints; 1.8 imperial pints) per hour. Slow-and-even delivery further improves water use efficiency without incurring the expense and complexity of pulsed delivery equipment.

An emitting pipe is a type of drip irrigation tubing with emitters pre-installed at the factory with specific distance and flow per hour as per crop distance.

An emitter restricts water flow passage through it, thus creating head loss required (to the extent of atmospheric pressure) to emit water in the form of droplets. This head loss is achieved by friction/turbulence within the emitter.

This section needs additional citations for verification. Please help improve this article by adding citations to reliable sources. Unsourced material may be challenged and removed. (November 2018) (Learn how and when to remove this template message)
This section is in list format but may read better as prose. You can help by converting this section, if appropriate. Editing help is available. (November 2018) The advantages of drip irrigation are:

The disadvantages of drip irrigation are:

Drip tape is a type of thin-walled dripperline used in drip irrigation. The first drip tape was known as "Dew Hose".[18]

Drip tape duct tape is made of polyethylene and is sold flat on reels. The wall thickness typically ranges from 0.1 to 0.6 mm (4 to 25 mils). Thicker walled tapes are commonly used for permanent subsurface drip irrigation and thinner walled tapes for temporary throw-away type systems in high-value crops.

Some product is not a tape, but a thin-walled dripperline, but in popular parlance, both types of products are called tapes. Typical tape diameters are 5⁄8 in (16 mm), 7⁄8 in (22 mm), and 1+3⁄8 in (35 mm), with the larger diameters more commonly used on permanent installations with longer runs.

Drip tape is a recyclable material and can be recycled into viable plastic resins for reuse in the plastics manufacturing industry. Drip irrigation kits for home gardens are increasingly popular for homeowners and consist of a timer, hose, and emitter. Hoses that are 4 mm (0.16 in) in diameter are used to irrigate flower pots.