Study of inheritance as it occurs in human beings

Genes are the common factor of the qualities of most human-inherited traits. Study of human genetics can answer questions about human nature, can help understand diseases and the development of effective treatment and help us to understand the genetics of human life. This article describes only basic features of human genetics; for the genetics of disorders please see: medical genetics. 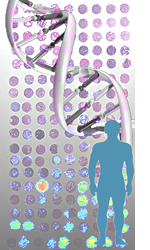 Representation of the double helix structure of human DNA Inheritance of traits for humans are based upon Gregor Mendel's model of inheritance. Mendel deduced that inheritance depends upon discrete units of inheritance, called factors or genes.[1]

Autosomal traits are associated with a single gene on an autosome (non-sex chromosome)—they are called "dominant" because a single copy—inherited from either parent—is enough to cause this trait to appear. This often means that one of the parents must also have the same trait, unless it has arisen due to an unlikely new mutation. Examples of autosomal dominant traits and disorders are Huntington's disease and achondroplasia. Autosomal recessive traits is one pattern of inheritance for a trait, disease, or disorder to be passed on through families. For a recessive trait or disease to be displayed two copies of the trait or disorder needs to be presented. The trait or gene will be located on a non-sex chromosome. Because it takes two copies of a trait to display a trait, many people can unknowingly be carriers of a disease. From an evolutionary perspective, a recessive disease or trait can remain hidden for several generations before displaying the phenotype. Examples of autosomal recessive disorders are albinism, cystic fibrosis.

Females express X-linked disorders when they are homozygous for the disorder and become carriers when they are heterozygous. X-linked dominant inheritance will show the same phenotype as a heterozygote and homozygote. Just like X-linked inheritance, there will be a lack of male-to-male inheritance, which makes it distinguishable from autosomal traits. One example of an X-linked trait is Coffin–Lowry syndrome, which is caused by a mutation in ribosomal protein gene. This mutation results in skeletal, craniofacial abnormalities, mental retardation, and short stature.

Y-linked inheritance occurs when a gene, trait, or disorder is transferred through the Y chromosome. Since Y chromosomes can only be found in males, Y linked traits are only passed on from father to son. The testis determining factor, which is located on the Y chromosome, determines the maleness of individuals. Besides the maleness inherited in the Y-chromosome there are no other found Y-linked characteristics. An example of a family pedigree displaying an autosomal recessive trait

A pedigree is a diagram showing the ancestral relationships and transmission of genetic traits over several generations in a family. Square symbols are almost always used to represent males, whilst circles are used for females. Pedigrees are used to help detect many different genetic diseases. A pedigree can also be used to help determine the chances for a parent to produce an offspring with a specific trait.

Four different traits can be identified by pedigree chart analysis: autosomal dominant, autosomal recessive, x-linked, or y-linked. Partial penetrance can be shown and calculated from pedigrees. Penetrance is the percentage expressed frequency with which individuals of a given genotype manifest at least some degree of a specific mutant phenotype associated with a trait.

Inbreeding, or mating between closely related organisms, can clearly be seen on pedigree charts. Pedigree charts of royal families often have a high degree of inbreeding, because it was customary and preferable for royalty to marry another member of royalty. Genetic counselors commonly use pedigrees to help couples determine if the parents will be able to produce healthy children.

A karyotype of a human male, showing 46 chromosomes including XY sex chromosomes.

A karyotype is a very useful tool in cytogenetics. A karyotype is picture of all the chromosomes in the metaphase stage arranged according to length and centromere position. A karyotype can also be useful in clinical genetics, due to its ability to diagnose genetic disorders. On a normal karyotype, aneuploidy can be detected by clearly being able to observe any missing or extra chromosomes.[1]

Genomics is the field of genetics concerned with structural and functional studies of the genome.[1] A genome is all the DNA contained within an organism or a cell including nuclear and mitochondrial DNA. The human genome is the total collection of genes in a human being contained in the human chromosome, composed of over three billion nucleotides.[2] In April 2003, the Human Genome Project was able to sequence all the DNA in the human genome, and to discover that the human genome was composed of around 20,000 protein coding genes.

Population genetics is the branch of evolutionary biology responsible for investigating processes that cause changes in allele and genotype frequencies in populations based upon Mendelian inheritance.[3] Four different forces can influence the frequencies: natural selection, mutation, gene flow (migration), and genetic drift. A population can be defined as a group of interbreeding individuals and their offspring. For human genetics the populations will consist only of the human species. The Hardy–Weinberg principle is a widely used principle to determine allelic and genotype frequencies.

Sex linkage is the phenotypic expression of an allele related to the chromosomal sex of the individual. This mode of inheritance is in contrast to the inheritance of traits on autosomal chromosomes, where both sexes have the same probability of inheritance. Since humans have many more genes on the X than the Y, there are many more X-linked traits than Y-linked traits. However, females carry two or more copies of the X chromosome, resulting in a potentially toxic dose of X-linked genes.[4]

To correct this imbalance, mammalian females have evolved a unique mechanism of dosage compensation. In particular, by way of the process called X-chromosome inactivation (XCI), female mammals transcriptionally silence one of their two Xs in a complex and highly coordinated manner.[4]