Aristarchus's 3rd century BCE calculations on the relative sizes of, from left, the Sun, Earth and Moon, from a 10th-century CE Greek copy

On the Sizes and Distances (of the Sun and Moon) (Ancient Greek: Περὶ μεγεθῶν καὶ ἀποστημάτων [ἡλίου καὶ σελήνης], romanized: Perì megethôn kaì apostēmátōn [hēlíou kaì selḗnēs]) is widely accepted as the only extant work written by Aristarchus of Samos, an ancient Greek astronomer who lived circa 310–230 BCE. This work calculates the sizes of the Sun and Moon, as well as their distances from the Earth in terms of Earth's radius.

The book was presumably preserved by students of Pappus of Alexandria's course in mathematics, although there is no evidence of this. The editio princeps was published by John Wallis in 1688, using several medieval manuscripts compiled by Sir Henry Savile.[1] The earliest Latin translation was made by Giorgio Valla in 1488. There is also a 1572 Latin translation and commentary by Frederico Commandino.[2][3]

Aristarchus began with the premise that, during a half moon, the moon forms a right triangle with the Sun and Earth. By observing the angle between the Sun and Moon, φ, the ratio of the distances to the Sun and Moon could be deduced using a form of trigonometry. 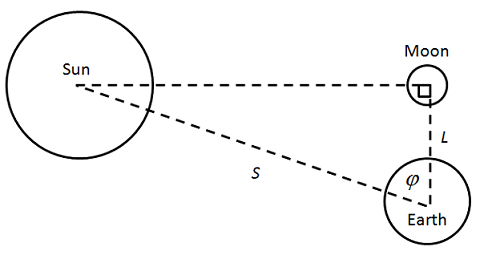 From the diagram and trigonometry, we can calculate that

The diagram is greatly exaggerated, because in reality, S = 390 L, and φ is extremely close to 90°. Aristarchus determined φ to be a thirtieth of a quadrant (in modern terms, 3°) less than a right angle: in current terminology, 87°. Trigonometric functions had not yet been invented, but using geometrical analysis in the style of Euclid, Aristarchus determined that

In other words, the distance to the Sun was somewhere between 18 and 20 times greater than the distance to the Moon. This value (or values close to it) was accepted by astronomers for the next two thousand years, until the invention of the telescope permitted a more precise estimate of solar parallax.

Aristarchus also reasoned that as the angular size of the Sun and the Moon were the same, but the distance to the Sun was between 18 and 20 times further than the Moon, the Sun must therefore be 18–20 times larger.

Aristarchus then used another construction based on a lunar eclipse:

By similarity of the triangles,

Dividing these two equations and using the observation that the apparent sizes of the Sun and Moon are the same,

The rightmost equation can either be solved for ℓ/t

The appearance of these equations can be simplified using n = d/ℓ and x = s/ℓ.

The above equations give the radii of the Moon and Sun entirely in terms of observable quantities.

The following formulae give the distances to the Sun and Moon in terrestrial units:

where θ is the apparent radius of the Moon and Sun measured in degrees.

It is unlikely that Aristarchus used these exact formulae, yet these formulae are likely a good approximation for those of Aristarchus.

The above formulae can be used to reconstruct the results of Aristarchus. The following table shows the results of a long-standing (but dubious) reconstruction using n = 2, x = 19.1 (φ = 87°) and θ = 1°, alongside the modern day accepted values.

The error in this calculation comes primarily from the poor values for x and θ. The poor value for θ is especially surprising, since Archimedes writes that Aristarchus was the first to determine that the Sun and Moon had an apparent diameter of half a degree. This would give a value of θ = 0.25, and a corresponding distance to the Moon of 80 Earth radii, a much better estimate. The disagreement of the work with Archimedes seems to be due to its taking an Aristarchus statement that the lunisolar diameter is 1/15 of a "meros" of the zodiac to mean 1/15 of a zodiacal sign (30°), unaware that the Greek word "meros" meant either "portion" or 7°1/2; and 1/15 of the latter amount is 1°/2, in agreement with Archimedes' testimony.

A similar procedure was later used by Hipparchus, who estimated the mean distance to the Moon as 67 Earth radii, and Ptolemy, who took 59 Earth radii for this value.

Some interactive illustrations of the propositions in On Sizes can be found here: