This article needs additional citations for verification. Please help improve this article by adding citations to reliable sources. Unsourced material may be challenged and removed.Find sources: "Styria" – news · newspapers · books · scholar · JSTOR (August 2015) (Learn how and when to remove this template message)
State in Austria

listen); Serbo-Croatian and Slovene: Štajerska; Hungarian: Stájerország) is a state (Bundesland) in the southeast of Austria. With an area of 16,401 km2 (6,332 sq mi), Styria is the second largest state of Austria, after Lower Austria. Styria is bordered to the south by Slovenia, and clockwise, from the southwest, by the Austrian states of Carinthia, Salzburg, Upper Austria, Lower Austria, and Burgenland. The state capital is Graz.

The March of Styria derived its name from the original seat of its ruling Otakar dynasty: Steyr, in today's Upper Austria. In German, the area is still called "Steiermark" while in English the Latin name "Styria" is used. The ancient link between Steyr and Styria is also apparent in their nearly identical coats of arms, a white Panther on a green background.

Grüner See with the Hochschwab mountain in the background

The western and eastern parts of the district Graz-Umgebung (literally, surroundings of Graz) may or may not be considered parts of West and East Styria, respectively. The southern parts of the Duchy of Styria, which formed part of former Yugoslavia and later Slovenia (with the exception of World War II), were (and sometimes colloquially still are) referred to as "Lower Styria" (Untersteiermark; Slovene: Štajerska). Graz, the capital of Styria

Historical view of the border between Styria and Carinthia, 1830

Styria was inhabited by Celtic tribes. After its conquest by the Romans, the eastern part of what is now Styria was part of Pannonia, while the western one was included in Noricum. During the Barbarian invasions, it was conquered or crossed by the Visigoths, the Huns, the Ostrogoths, the Rugii, and the Lombards. Slavs under the domination of the Avars settled in the valleys around 600. At the same time, Bavarians under Frankish domination began to expand their area to the south and east, ultimately absorbing the Slavic population.

In 1180, Styria separated from the Duchy of Carinthia and became a Duchy of its own; in 1192 the Austrian Duke Leopold V became also Duke of Styria. Later, Styria formed the central part of Inner Austria.

Styria developed culturally and economically under Archduke John of Austria between 1809 and 1859.

In 1918, after World War I, it was divided into a northern section (forming what is the current Austrian state), and a southern one, called Lower Styria, now inhabited by Slovenians, and which was annexed to Yugoslavia, and later became part of Slovenia. As a result of the turbulence of the two world wars, the German-speaking population of Lower Styria, which had been concentrated in the cities, migrated out of the region or was expelled.

View over the vineyards of Western Styria

As elsewhere in the developed world, there has been a shift away from the manufacturing sector towards the service sector in Styria. This has had negative consequences for the industrial regions of upper Styria which have suffered a steady decline in population in recent years.

In 2004, Styria had the strongest economic growth rate in Austria at 3.8%—mainly due to the Graz area which saw strong economic growth that year and has continued to grow in economic and population terms since then.

Styria is home to more than 150 clean technology companies of which one dozen are world technology leaders in their field. The revenue of Styrian cleantech companies totals €2.7 billion. This equals 8 percent of the Gross Regional Product (GRP) and is one of the highest concentrations of leading clean technology companies in Europe. The companies have an average (real) growth rate of 22 percent per year—well above the worldwide cleantech market growth of 18 percent per year. The region created roughly 2,000 additional green jobs in 2008 alone.[4]

The Formula One Austrian Grand Prix has been held in the region, first at the Zeltweg Airfield in 1964 and then at the Osterreichring from 1970 to 1987. The sport returned to the circuit, now redesigned and rebranded as the A1-Ring, from 1997 to 2003. Formula One once again returned to the circuit, now renamed the Red Bull Ring, in 2014 and has been held at the track every year since. The COVID-19 pandemic saw the 2020 Formula One calendar massively revised, resulting in the Red Bull Ring becoming the first circuit to host consecutive Formula One World Championship Grands Prix, with the first round running under the Austrian Grand Prix name and the second held as the Styrian Grand Prix. This continued in 2021.[5]

The state is divided into 13 districts (Bezirke), one of them a statutory city. 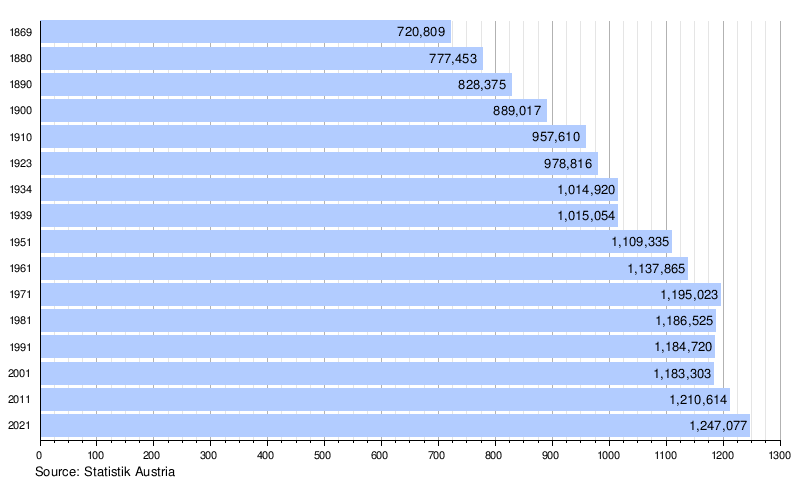 An enshrined crucifix amidst cornfields near Mureck in rural Styria, attesting to enduring Catholic faith and popular piety ("Volksfrömmigkeit")

The state had been a stronghold of the right-wing Austrian People's Party (ÖVP) since 1945. However, Graz is markedly more left-wing than the rural districts of the province.

The governor (Austrian political term: Landeshauptmann) of Styria has typically been a ÖVP candidate.

In the 2021 municipal election in Graz, the Communist Party of Austria (KPÖ) surprisingly took over first place from the ÖVP, thus pushing long-time mayor Siegfried Nagl (ÖVP) out of office. The result caused a sensation internationally. Elke Kahr led the KPÖ for a third time in the 2021 Graz local election. Despite opinion polling suggesting a victory for the ruling ÖVP, the KPÖ became the largest party with 28.8% of votes and 15 seats. After the election, the KPÖ entered into coalition talks with the The Greens – The Green Alternative and Social Democratic Party of Austria (SPÖ).[6] On November 13, 2021, the KPÖ, the Greens and the SPÖ announced their coalition: Graz gets a communist mayor with Elke Kahr.

In the 2005 elections for state parliament the SPÖ under their regional chairman Franz Voves won the majority after the ÖVP had damaged its credibility through scandals and the secession of a high-ranking party member who took part in the 2005 elections after setting up his own party. In these elections, the KPÖ also received many votes after it had gained much popularity through its role in local politics in Graz during the preceding few years. The two right-wing populist parties, the Freedom Party of Austria (FPÖ) and the Alliance for the Future of Austria (BZÖ), failed to win seats.

In subsequent elections in 2010 and 2015, the SPÖ, the ÖVP, and the KPÖ each lost between one fourth and one third of their shares of the vote relative to 2005. The FPÖ grew from 4.6 percent to 26.8 percent.[7][8] The current government of Styria is a coalition of SPÖ and ÖVP, with each party holding 4 seats of the 8 seats available. The governor, Hermann Schützenhöfer, is a representative of the People's Party. His deputy, Michael Schickhofer, is a SPÖ member.[9][10][11]

Wikivoyage has a travel guide for Styria.
Authority control
States of Austria
Cities and districts (Bezirke) of Styria
Categories
Categories: