Timothy Antonio "T. J." Yeldon Jr.[2] (born October 2, 1993) is an American football running back who is a free agent. He was drafted by the Jacksonville Jaguars in the second round of the 2015 NFL Draft. He played college football at Alabama.

Yeldon attended Daphne High School in Daphne, Alabama, where he played football and ran track for the Trojans athletic teams.[3] Yeldon first played varsity football as a freshman in 2008, being called up to play slot receiver and contribute on special teams,[2] and recorded 227 rushing yards and one touchdown as well as 131 receiving yards and a score on the season. As a sophomore, Yeldon had 1,121 yards on 201 carries with 34 catches for 361 yards and one touchdown. He rushed for 148 yards on 24 carries and scored twice in a 41–19 upset of C. J. Mosley's Theodore Bobcats in the first round of the playoffs.[4]

In his junior season, Yeldon totaled 1,112 yards and 18 scores on the ground while also catching a career-best 34 passes for 504 yards and five touchdowns. Daphne finished the year with an unbeaten 15–0 record and the 2010 Alabama 6A State Championship, beating the defending champions Hoover Buccaneers, who were on a 21-game winning streak, in the final. Yeldon scored the winning touchdown off a one-yard run with 11 minutes of play remaining.[5][6]

In his senior season, Yeldon rushed for 2,193 yards on 232 carries with 31 touchdowns and won the Alabama Mr. Football Award over Hueytown's Jameis Winston,[7] becoming the first running back to win the award since Cadillac Williams in 2000.[8] Yeldon was also named a first-team All-State selection by the Alabama Sports Writers Association and second-team USA Today High School All-American. Daphne finished with a 10–2 record, finishing the season with a 3–13 loss to Prattville in the 6A playoffs.[9]

Yeldon was also on the school's track team, where he competed as a sprinter and jumper. At the prelims of the 2010 Lionell Newell Track Meet, he ran a career-best time of 11.35 seconds in the 100 meters, placing 12th overall in the finals.[10] He also placed 6th in the long jump at the 2010 McGill-Toolen Invitational, with a personal-best mark of 6.08 meters.[11]

Regarded as a five-star recruit by Rivals.com, Yeldon was listed as the No. 2 running back prospect in his class, behind only Johnathan Gray.[12] Understandably, he had scholarship offers from almost every football powerhouse, including Florida, Oregon, Penn State, and Tennessee. In June 2011, Yeldon verbally committed to Auburn.[13] However, after the end of his senior season, he switched to Auburn's in-state rival Alabama, citing uncertainty over the Tigers' offensive coordinator position following Gus Malzahn's move to Arkansas State.[14] Yeldon enrolled at Alabama in January 2012,[8] right after the 2012 U.S. Army All-American Bowl.

After his junior season, Yeldon decided to forego his senior season and entered the 2015 NFL Draft.[27][28]

Yeldon was drafted by the Jacksonville Jaguars in the second round with the 36th overall pick in the 2015 NFL Draft. He was the third running back to be selected that year.[31]

Jaguars head coach Gus Bradley named Yeldon the starting running back for the beginning of the season, ahead of veterans Denard Robinson, Toby Gerhart, and Bernard Pierce.[33] On September 13, 2015, he made his NFL debut and carried the ball 15 times for 51 yards, while also catching three passes for 16-yards, in a 20–9 loss to the Carolina Panthers.[34] The next game against the Miami Dolphins, Yeldon had a season-high 25 carries for 70 yards in a 23–20 victory.[35] On October 11, 2015, he had 11 rushing attempts, 32 rushing yards, five receptions, 31 receiving yards, and scored his first career touchdown reception in a 31–38 loss to the Tampa Bay Buccaneers.[36]

After five consecutive starts to begin his rookie campaign, Yeldon missed the Week 6 matchup against the Houston Texans due to a groin injury. He returned as the starter on October 25, rushing for season-high 115 yards on 15 carries and scored his first career rushing touchdown in a 34–31 victory over the Buffalo Bills.[37] During a Week 14 contest against the Indianapolis Colts, he had 11 carries for 62 yards but left the game with an MCL sprain that would keep him out the following week.[38][39]

After being a healthy scratch for the first six weeks of the 2017 season, on October 22, during Week 7 against the Indianapolis Colts, because of an injury to Leonard Fournette, Yeldon rushed for 122 yards, which highlighted a 58-yard touchdown, as the Jaguars shut out the Colts 27–0.[44] Overall, he finished the regular season with 253 rushing yards, two rushing touchdowns, and 30 receptions for 224 receiving yards.[45] The Jacksonville Jaguars won the AFC South and made the playoffs.[46] In the Divisional Round against the Pittsburgh Steelers, he had 20 rushing yards and a rushing touchdown to go along with 57 receiving yards in the 45–42 victory.[47] In the AFC Championship against the New England Patriots, he had 25 rushing yards in the 24–20 loss.[48] 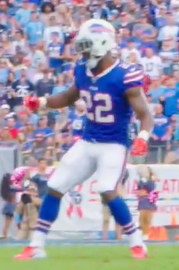 Yeldon in a game against the Tennessee Titans