Daily compact newspaper in Australia
‹ The template Infobox newspaper is being considered for merging. ›

The executive editor is James Chessell and the editor is Bevan Shields. Tory Maguire is national editor, Monique Farmer is life editor, and the publisher is chief digital and publishing officer Chris Janz. 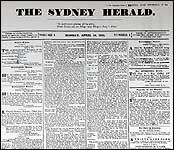 The cover of the newspaper's first edition, on 18 April 1831 Sydney Morning Herald building on the corner of Pitt and Hunter Streets, built 1856, demolished in the 1920s for a larger building

In 1831 three employees of the now-defunct Sydney Gazette, Ward Stephens, Frederick Stokes, and William McGarvie, founded The Sydney Herald. In 1931 a Centenary Supplement (since digitised) was published.[7] The original four-page weekly had a print run of 750. In 1840, the newspaper began to publish daily. In 1841, an Englishman named John Fairfax purchased the operation, renaming it The Sydney Morning Herald the following year.[8] Fairfax, whose family were to control the newspaper for almost 150 years, based his editorial policies "upon principles of candour, honesty and honour. We have no wish to mislead; no interest to gratify by unsparing abuse or indiscriminate approbation."

During the 1890s Donald Murray, who invented a predecessor of the teleprinter, worked there.[9] The Herald added a weekly "Page for Women" in 1905 which was edited by Theodosia Ada Wallace.[10]

The SMH was late to the trend of printing news rather than just advertising on the front page, doing so from 15 April 1944. Of the country's metropolitan dailies, only The West Australian was later in making the switch. In 1949, the newspaper launched a Sunday edition, The Sunday Herald. Four years later, this was merged with the newly acquired Sun newspaper to create The Sun-Herald, which continues to this day.

By the mid-1960s a new competitor had appeared in Rupert Murdoch's national daily The Australian, which was first published on 15 July 1964.

In 1995, the company launched the newspaper's web edition smh.com.au.[12] The site has since grown to include interactive and multimedia features beyond the content in the print edition. Around the same time, the organisation moved from Jones Street to new offices at Darling Park and built a new printing press at Chullora, in the city's west. The SMH later moved with other Sydney Fairfax divisions to a building at Darling Island.

In May 2007, Fairfax Media announced it would be moving from a broadsheet format to the smaller compact or tabloid-size, in the footsteps of The Times, for both The Sydney Morning Herald and The Age.[13] Fairfax Media dumped these plans later in the year. However, in June 2012, Fairfax Media again announced it planned to shift both broadsheet newspapers to tabloid size, in March 2013.[14] Fairfax also announced it would cut staff across the entire group by 1,900 over three years and erect paywalls around the papers' websites.[15] The subscription type is to be a freemium model, limiting readers to a number of free stories per month, with a payment required for further access.[16] The announcement was part of an overall "digital first" strategy of increasingly digital or on-line content over printed delivery, to "increase sharing of editorial content," and to assist the management's wish for "full integration of its online, print and mobile platforms."[15]

In July 2013 it was announced that the SMH's news director, Darren Goodsir, would become editor-in-chief, replacing Sean Aylmer.[17]

On 22 February 2014, the final Saturday edition was produced in broadsheet format with this too converted to compact format on 1 March 2014,[18] ahead of the decommissioning of the printing plant at Chullora in June 2014.[19]

In June 2022 the paper received global coverage and backlash to an attempted outing of Australian actress Rebel Wilson by columnist Andrew Hornery and the subsequent defense of his since-deleted column by editor Bevan Shields, the former of which Wilson preempted with an Instagram post confirming her relationship.[20][21][22]

The newspaper's editorial stance was generally centrist but has more recently become right wing.[23] According to one commentator it is seen as the most centrist among the three major Australian non-tabloids (the other two being The Australian and The Age).[24] In 2004, the newspaper's editorial page stated: "market libertarianism and social liberalism" were the two "broad themes" that guided the Herald's editorial stance.[25] During the 1999 referendum on whether Australia should become a republic, the Herald (like the other two major papers) strongly supported a "yes" vote.[26]

During the 2004 Australian federal election, the Herald did not endorse a party,[25][27] but subsequently resumed its practice of making endorsements.[27] After endorsing the Coalition at the 2013[31] and 2016 federal elections,[32] the newspaper begrudgingly endorsed Bill Shorten's Labor Party in 2019, after Malcolm Turnbull was ousted as prime minister.[29]

At the state level, the Herald has consistently backed the Coalition; the only time since 1981 that it has endorsed a Labor government for New South Wales was Bob Carr's government in the 2003 election.[27]

The Herald endorsed Democratic candidate Hillary Clinton in the run-up for the 2016 U.S. presidential election.[33]

Fairfax went public in 1957 and grew to acquire interests in magazines, radio, and television. The group collapsed spectacularly on 11 December 1990 when Warwick Fairfax, great-great-grandson of John Fairfax, attempted to privatize the group by borrowing $1.8 billion. The group was bought by Conrad Black before being re-listed in 1992. In 2006, Fairfax announced a merger with Rural Press, which brought in a Fairfax family member, John B. Fairfax, as a significant player in the company.[38] From 10 December 2018 Nine and Fairfax Media merged into one business known as Nine. Nine Entertainment Co. owns The Sydney Morning Herald.

Column 8 is a short column to which Herald readers send their observations of interesting happenings. It was first published on 11 January 1947.[39] The name comes from the fact that it originally occupied the final (8th) column of the broadsheet newspaper's front page. In a front-page redesign in the lead-up to the Sydney Olympic Games in 2000, Column 8 moved to the back page of the first section from 31 July 2000.[40]

The column is also sometimes affectionately known as Granny's Column, after a fictional grandmother who supposedly edited it.[39] The column's original logo was a caricature of Sydney Deamer, originator of the column and its author for 14 years.[40][42]

It was edited for 15 years by George Richards, who retired on 31 January 2004.[39][43] Other editors besides Deamer and Richards have been Duncan Thompson, Bill Fitter, Col Allison, Jim Cunningham, Pat Sheil, and briefly, Peter Bowers and Lenore Nicklin.[43] The column is, as of March 2017, edited by Herald journalist Tim Barlass, who frequently appends reader contributions with puns; and who made the decision to reduce the column's publication from its traditional six days a week, down to just weekdays.[44]

The Opinion section is a regular of the daily newspaper, containing opinion on a wide range of issues. Mostly concerned with relevant political, legal and cultural issues, the section presents work by regular columnists, including Herald political editor Peter Hartcher, Ross Gittins, as well as occasional reader-submitted content. Iconoclastic Sydney barrister Charles C. Waterstreet, upon whose life the television workplace comedy Rake is loosely based, had a regular humour column in this section.

Good Weekend is a liftout magazine that is distributed with both The Sydney Morning Herald and The Age in Saturday editions.

It contains, on average, four feature articles written by its stable of writers and others syndicated from overseas as well as sections on food, wine and fashion.

Other sections include "Modern Guru," which features humorous columnists including Danny Katz responding to the everyday dilemmas of readers; a regular column by writer Benjamin Law; a Samurai Sudoku; and "The Two of Us," containing interviews with a pair of close friends, relatives or colleagues.

The paper has been partially digitised as part of the Australian Newspapers Digitisation Program project of the National Library of Australia.[45][46][47]