Windows NT 4.0 is a major release of the Windows NT operating system developed by Microsoft and oriented towards businesses. The direct successor to Windows NT 3.51, it was released to manufacturing on July 31, 1996,[1] and was launched to retail on August 24, 1996. Windows NT 4.0 was and remains a primary business-oriented operating system, and three years after its introduction, it was followed by Windows 2000. Workstation, server and embedded editions were sold, and all editions feature a graphical user interface similar to that of Windows 95, which was superseded by Windows 98 and could still be directly upgraded by either Windows 2000 Professional[7] or Windows Me.

Windows NT 4.0 is the last public release of Windows for the Alpha, MIPS, and PowerPC architectures.

The successor to Windows NT 3.51, Windows NT 4.0 introduced the user interface of Windows 95 to the Windows NT family, including the Windows shell, File Explorer (known as Windows NT Explorer at the time), and the use of "My" nomenclature for shell folders (e.g. My Computer). It also includes most components introduced with Windows 95. Internally, Windows NT 4.0 was known as the Shell Update Release (SUR).[11] While many administrative tools, notably User Manager for Domains, Server Manager and Domain Name Service Manager still used the old graphical user interfaces, the Start menu in Windows NT 4.0 separated the per-user shortcuts and folders from the shared shortcuts and folders by a separator line.[12] Windows NT 4.0 includes some enhancements from Microsoft Plus! for Windows 95 such as the Space Cadet pinball table, font smoothing, showing window contents while dragging, high-color icons and stretching the wallpaper to fit the screen. Windows Desktop Update could also be installed on Windows NT 4.0 to update the shell version and install Task Scheduler.[13] Windows NT 4.0 Resource Kit included the Desktop Themes utility.[14]

Windows NT 4.0 is a preemptively multitasked,[15] 32-bit operating system that is designed to work with either uniprocessor or symmetric multi-processor computers.

Windows NT 4.0 is the last major release of Microsoft Windows to support the Alpha, MIPS or PowerPC CPU architectures as Windows 2000 runs solely on IA-32 only. It remained in use by businesses for a number of years, despite Microsoft's many efforts to get customers to upgrade to Windows 2000 and newer versions. It was also the last release in the Windows NT family to be branded as Windows NT although Windows 2000 carried the designation "Built on NT Technology".[16]

Although the chief enhancement has been the addition of the Windows 95 shell, there are several major performance, scalability and feature improvements to the core architecture, kernel, USER32, COM and MSRPC.[11][17] Windows NT 4.0 also introduced the concept of system policies[18] and the System Policy Editor.

Other important features were:

One significant difference from previous versions of Windows NT is that the Graphics Device Interface (GDI) is moved into kernel mode[22] rather than being in user mode in the CSRSS process. This eliminated a process-to-process context switch in calling GDI functions, resulting in a significant performance improvement over Windows NT 3.51, particularly in the graphical user interface. This, however, also mandated that graphics and printer drivers had to run in kernel mode as well,[23] resulting in potential stability issues.

Windows NT 4.0 was the first release of Microsoft Windows to include DirectX as standard—version 2 shipped with the initial release of Windows NT 4.0, and version 3 was included with the release of Service Pack 3 in mid-1997. However advanced hardware accelerated Direct3D and DirectSound multimedia features were never available on Windows NT 4.0. Later versions of DirectX were not released for Windows NT 4.0. However, OpenGL was supported; it was used by Quake 3[24] and Unreal Tournament.[25]

In early releases of 4.0, numerous stability issues did occur as graphics and printer vendors had to change their drivers to be compatible with the kernel mode interfaces exported by GDI. The change to move the GDI to run in the same process context as its caller was prompted by complaints from NT Workstation users about real-time graphics performance, but this change put a considerable onus on hardware manufacturers to update device drivers.[26]

Windows NT 4.0 also included a new Windows Task Manager utility. Previous versions of Windows NT included the Task List utility, but it only shows applications currently on the desktop. To monitor CPU and memory usage, users were forced to use Performance Monitor. The task manager offers a more convenient way of getting a snapshot of all the processes running on the system at any given time.[27]

Windows NT 4.0, like previous versions of Windows NT before it and versions after it, is a fully 32-bit OS, while Windows 95 is a 16/32-bit hybrid OS.

While providing much greater stability than Windows 95, Windows NT 4.0 was less flexible from a desktop perspective. Much of the stability was gained through the use of protected memory and the hardware abstraction layer. Direct hardware access was disallowed and "misbehaving" programs were terminated without needing the computer to be restarted. The trade-off was that NT required much more memory (32 MB for normal desktop use, 128 MB or more for heavy 3D applications) in comparison to consumer targeted products such as Windows 95.[29]

While nearly all programs written for Windows 95 run on Windows NT, many 3D games would not, partly because of limited DirectX support for Windows NT 4.0. Third-party device drivers were an alternative to access the hardware directly, but poorly written drivers became a frequent source of the infamous error known as the Blue Screen of Death (BSoD) that would require the system to be restarted.[30]

In spite of shipping a year later than Windows 95, by default there is no Legacy Plug and Play support and no Device Manager on Windows NT 4.0, which greatly simplifies installation of hardware devices (although limited support could be installed later). Many basic DOS programs would run; however, graphical DOS programs would not run because of the way they accessed graphics hardware. Although Windows NT 4.0 introduced an application programming interface (API) for defragmentation,[21] there was no built-in defragmentation utility, unlike Windows 95. Also, Windows NT 4.0 lacked USB support, a preliminary version of which would be added to OEM editions of Windows 95 in OSR 2.1.[31][32]

The difference between the NT family and 9x family would remain until the release of Windows XP in 2001. At that time, the APIs — such as OpenGL and DirectX — had matured sufficiently to be more efficient to write for common PC hardware, and the hardware itself had become powerful enough to handle the API processing overhead.

The maximum amount of supported physical random-access memory (RAM) in Windows NT 4.0 is 4 GB,[33] which is the maximum possible for a 32-bit operating system that does not support PAE.[34] By comparison, Windows 95 fails to boot on computers with more than approximately 480 MB of memory.[35]

Like previous versions of NT, version 4.0 can run on multiple processor architectures. Windows 95, however, can only run on x86. 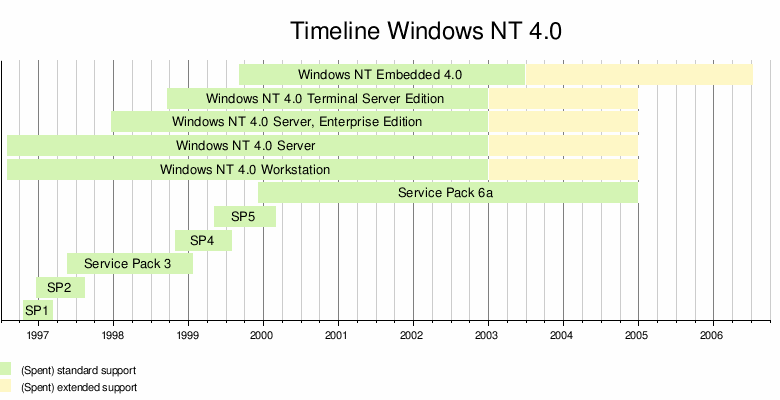 Windows NT 4.0 could be directly upgraded to Windows 2000 or Windows XP Professional on IA-32-based systems only.[41]

Microsoft released five revisions of the Windows NT 4.0 Workstation and Server Resource Kit (original release plus four supplements) which contained a large number of tools and utilities, such as desktops.exe which allowed the user to have multiple desktops, as well as third-party software.

Between June 2003 and June 2007, 127 security flaws were identified and patched in Windows 2000 Server, many of which may also affect Windows NT 4.0 Server; however, Microsoft does not test security bulletins against unsupported software.