This article needs additional citations for verification. Please help improve this article by adding citations to reliable sources. Unsourced material may be challenged and removed.Find sources: "Diegesis" – news · newspapers · books · scholar · JSTOR (September 2009) (Learn how and when to remove this template message)

Diegesis (/ˌdaɪəˈdʒiːsɪs/; from the Greek διήγησις from διηγεῖσθαι, "to narrate") is a style of fiction storytelling that presents an interior view of a world in which:

In contrast to mimesis

Diegesis (Greek διήγησις "narration") and mimesis (Greek μίμησις "imitation") have been contrasted since Plato's and Aristotle's times. Mimesis shows rather than tells, by means of action that is enacted. Diegesis is the telling of a story by a narrator. The narrator may speak as a particular character, or may be the invisible narrator, or even the all-knowing narrator who speaks from "outside" in the form of commenting on the action or the characters.

In Book III of his Republic (c. 373 BC), Plato examines the "style" of "poetry" (the term includes comedy, tragedy, epic and lyric poetry):[2] All types narrate events, he argues, but by differing means. He distinguishes between narration or report (diegesis) and imitation or representation (mimesis). Tragedy and comedy, he goes on to explain, are wholly imitative types; the dithyramb is wholly narrative; and their combination is found in epic poetry. When reporting or narrating, "the poet is speaking in his own person; he never leads us to suppose that he is any one else"; when imitating, the poet produces an "assimilation of himself to another, either by the use of voice or gesture".[3] In dramatic texts, the poet never speaks directly; in narrative texts, the poet speaks as him or herself.[4]

In his Poetics, the ancient Greek philosopher Aristotle argues that kinds of "poetry" (the term includes drama, flute music, and lyre music for Aristotle) may be differentiated in three ways: according to their medium, according to their objects, and according to their mode or "manner" (section I); "For the medium being the same, and the objects the same, the poet may imitate by narration—in which case he can either take another personality as Homer does, or speak in his own person, unchanged—or he may present all his characters as living and moving before us" (section III).

In filmmaking the term is used to name the story depicted on screen, as opposed to the story in real time that the screen narrative is about. Diegesis may concern elements, such as characters, events, and things within the main or primary narrative. However, the author may include elements that are not intended for the primary narrative, such as stories within stories. Characters and events may be referred to elsewhere or in historical contexts and are therefore outside the main story; thus, they are presented in an extradiegetic situation.

For narratologists all parts of narratives—characters, narrators, existents, actors—are characterized in terms of diegesis. For definitions of diegesis, one should consult Aristotle's Poetics; Gerard Genette's Narrative Discourse: An Essay in Method (Cornell University Press, 1980); or (for a readable introduction) H. Porter Abbott's The Cambridge Introduction to Narrative (Cambridge University Press 2002). In literature, discussions of diegesis tend to concern discourse/sjužet (in Russian Formalism) (vs. story/fabula).

The classical distinction between the diegetic mode and the mimetic mode relates to the difference between the epos (or epic poetry) and drama.[5] The "epos" relates stories by telling them through narration, while drama enacts stories through direct embodiment (showing). In terms of classical poetics, the cinema is an epic form that utilizes dramatic elements; this is determined by the technologies of the camera and editing. Even in a spatially and temporally continuous scene (mimicking the theatrical situation, as it were), the camera chooses where to look for us. In a similar way, editing causes us to jump from one place (and/or time) to another, whether it be elsewhere in the room, or across town. This jump is a form of narration; it is as if a narrator whispers to us: "meanwhile, on the other side of the forest". It is for this reason that the "story-world" in cinema is referred to as "diegetic"; elements that belong to the film's narrative world are diegetic elements. This is why, in the cinema, we may refer to the film's diegetic world.[citation needed]

"Diegetic", in the cinema, typically refers to the internal world created by the story that the characters themselves experience and encounter: the narrative "space" that includes all the parts of the story, both those that are and those that are not actually shown on the screen (such as events that have led up to the present action; people who are being talked about; or events that are presumed to have happened elsewhere or at a different time).[citation needed]

Thus, elements of a film can be "diegetic" or "non-diegetic". These terms are most commonly used in reference to sound in a film, but can apply to other elements. For example, an insert shot that depicts something that is neither taking place in the world of the film, nor is seen, imagined, or thought by a character, is a non-diegetic insert. Titles, subtitles, and voice-over narration (with some exceptions) are also non-diegetic.[citation needed] 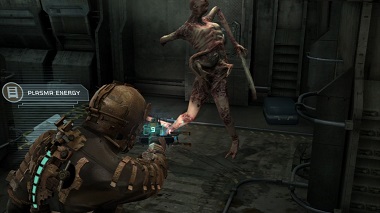 In video games "diegesis" comprises the narrative game world, its characters, objects and actions which can be classified as "intra-diegetic", by both being part of the narration and not breaking the fourth wall.[6] Status icons, menu bars and other UI which are not part of the game world itself can be considered as "extra-diegetic"; a game character does not know about them even though for the player they may present crucial information. A noted example of a diegetic interface in video games is that of the Dead Space series, in which the player-character is equipped with an advanced survival suit that projects holographic images to the character within the game's rendering engine that also serve as the game's user-interface to the player to show weapon selection, inventory management, and special actions that can be taken.[7]