For this and other achievements, Akasaki was awarded the Kyoto Prize in Advanced Technology in 2009,[6] and the IEEE Edison Medal in 2011.[7] He was also awarded the 2014 Nobel prize in Physics, together with Hiroshi Amano and Shuji Nakamura,[8] "for the invention of efficient blue light-emitting diodes, which has enabled bright and energy-saving white light sources". In 2021, Akasaki, along with Shuji Nakamura, Nick Holonyak, M. George Craford and Russell D. Dupuis were awarded the Queen Elizabeth Prize for Engineering "for the creation and development of LED lighting, which forms the basis of all solid state lighting technology".[9] 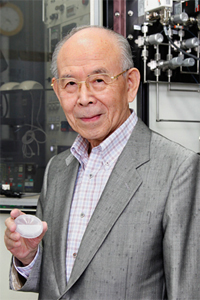 He was born in Chiran, Kagoshima Prefecture and raised in Kagoshima City.[10][11] His elder brother is Masanori Akazaki [ja] who was an electronic engineering researcher and a Professor Emeritus at Kyushu University.[11] (Their surname "赤﨑" is also pronounced Akazaki.[12][13])

Isamu graduated from Kagoshima Prefectural Daini-Kagoshima Middle School (now Kagoshima Prefectural Konan High School) in 1946, from Seventh Higher School Zoshikan (now Kagoshima University) in 1949[11] and from Department of Chemistry, Faculty of Science, Kyoto University in 1952.[10] During his university years, he visited shrines and temples that local residents rarely visit, walked around the mountains of Shinshu during the summer vacation, enjoyed classes and enjoyed a fulfilling student era.[10] After he became a researcher, he obtained the degree of Doctor of Engineering from Nagoya University in 1964.[14]

Akasaki started working on GaN-based blue LEDs in the late 1960s. Step by step, he improved the quality of GaN crystals and device structures[15] at Matsushita Research Institute Tokyo, Inc. (MRIT), where he decided to adopt metalorganic vapor phase epitaxy (MOVPE) as the preferred growth method for GaN.

In 1981 he started afresh the growth of GaN by MOVPE at Nagoya University, and in 1985 he and his group succeeded in growing high-quality GaN on sapphire substrate by pioneering the low-temperature (LT) buffer layer technology.[16][17]

This high-quality GaN enabled them to discover p-type GaN by doping with magnesium (Mg) and subsequent activation by electron irradiation (1989), to produce the first GaN p-n junction blue/UV LED (1989), and to achieve conductivity control of n-type GaN (1990)[18] and related alloys (1991)[19] by doping with silicon (Si), enabling the use of hetero structures and multiple quantum wells in the design and structure of more efficient p-n junction light emitting structures.

They achieved stimulated emission from the GaN firstly at room temperature in 1990,[20] and developed in 1995 the stimulated emission at 388 nm with pulsed current injection from high-quality AlGaN/GaN/GaInN quantum well device.[21] They verified quantum size effect (1991)[22] and quantum confined Stark effect (1997)[23] in nitride system, and in 2000 showed theoretically the orientation dependence of piezoelectric field and the existence of non-/semi-polar GaN crystals,[24] which have triggered today's worldwide efforts to grow those crystals for application to more efficient light emitters.

Akasaki's patents were produced from these inventions, and the patents have been rewarded as royalties. Nagoya University Akasaki Institute[25] opened on October 20, 2006. The cost of construction of the institute was covered with the patent royalty income to the university, which was also used for a wide range of activities in Nagoya University. The institute consists of an LED gallery to display the history of blue LED research/developments and applications, an office for research collaboration, laboratories for innovative research, and Akasaki's office on the top sixth floor. The institute is situated in the center of the collaboration research zone in Nagoya University Higashiyama campus.

with Seiji Morimoto (in Sweden)

From 1987 to 1990 he was a Project Leader of "Research and Development of GaN-based Blue Light–Emitting Diode" sponsored by Japan Science and Technology Agency (JST). He then led the "Research and Development of GaN-based Short-Wavelength Semiconductor Laser Diode" product sponsored by JST from 1993 to 1999. While he led this project, he was also a visiting professor at the Research Center for Interface Quantum Electronics at Hokkaido University, from 1995 to 1996. In 1996 he was a Project Leader of the Japan Society for the Promotion of Science's for the "Future program" up to 2001. From 1996 he started as a Project Leader of "High-Tech Research Center for Nitride Semiconductors" at Meijo University, sponsored by MEXT until 2004. From 2003 up to 2006 he was the Chairman of "R&D Strategic Committee on the Wireless Devices Based on Nitride Semiconductors" sponsored by METI. with Shuji Nakamura and Hiroshi Amano (at the Grand Hôtel on December 8, 2014) Akasaki received the Order of Culture. After that, they posed for the photo. (at the East Garden of the Tokyo Imperial Palace on November 3, 2011)