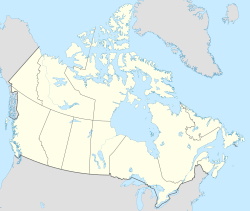 Universities in Canada's provinces and territories

Universities in Canada are established and operate under provincial and territorial government charters, except in one case directed by First Nations bands[note 1] and in another by federal legislation.[note 2] Most public universities in the country are members of Universities Canada (formerly the Association of Universities and Colleges of Canada (AUCC)). The title "university" is protected under federal regulation.[1]

As of 2021[update], there are 97 universities in Canada, offering education in English and French.[2] Most French-speaking universities are located in Quebec, though several institutions outside the province are either francophone or bilingual. 1.8 million students are enrolled in university.[3] Programs are offered to graduating high school students through choice; however, students must maintain specific entering averages, which generally range from 65–85%, depending on criteria set by the chosen university. On campus residences are available at 95% of universities in Canada.[4] Most include a meal plan and general utilities. Residence is optional at all post-secondary campuses.[citation needed]

Degree programs generally last three to four years, though some programs may take longer to complete due to cooperative education (Co-op) programs or joint programs with colleges which are touted for offering practical experience. Tuition is based on program material and content, which vary in price. For many programs, more general courses will be taken in first year while "program specific courses" begin in year two. Some universities such as University of Toronto require admission separate from initial admission from high school into specific programs based on internal standards achieved in first year (i.e. a set grade point average).[citation needed] Higher education institutions in Canada are prevented from becoming diploma mills by provincial/territorial legislation and regulation.

Universities by province and territory

The University of Alberta has the largest number of graduate students enrolled in Alberta.

Post-secondary education in Alberta is regulated by the Ministry of Advanced Education.[5] There are eight public universities in Alberta, eleven public colleges, two polytechnical institutes (which grant degrees), and seven private colleges (all of which grant degrees). Most private universities refer to themselves as "university colleges", and they grant equivalent degrees.[5] One university, University nuhelotʼįne thaiyotsʼį nistameyimâkanak Blue Quills, is governed not under provincial legislation, but controlled directly by a consortium of seven First Nations band governments.

Athabasca University, a distance learning university, has been based out of Athabasca since 1970.

Most recently, The King's University[when?] and Concordia University of Edmonton (2014) have obtained the right to change their respective names from University-College to University. The University of British Columbia has the largest number of students enrolled in western Canada. Established in 1818, Université de Saint-Boniface is the oldest post-secondary institute in Manitoba and the only French language university in western Canada.

The biggest provider of online and distance education in BC is Thompson Rivers University, Open Learning. With over 400 individual courses and more than 57 programs available for completion by distance and online learning, students can take a variety of programs such as: adult secondary school completion; certificates and diplomas, including advanced and post-baccalaureate; associate degrees; and bachelor's degrees. Considering distance students, Thompson Rivers University's enrolment is 22,036 (8964 of which is distance).

University enrolment in Manitoba ranges from Booth University College with several hundred students to the University of Manitoba with 26,800 students.

The University of New Brunswick has the largest student enrolment in the province. Memorial University of Newfoundland is one of the largest universities in Atlantic Canada.

The University of King's College is the oldest university in Nova Scotia.

Several universities in Nova Scotia have religious connections. The University of King's College, founded in Windsor, was the first college to obtain university powers in British North America, at a time when Upper Canada had no government of its own. It has always remained under the control of the Church of England. Dalhousie University, originally known as Dalhousie College, was established in Halifax in 1818 with the help of the Presbyterian Church, and Acadia University was founded by Baptists. Catholics formed Saint Mary's University, Mount Saint Vincent University, and Saint Francis Xavier University.[22]

Université Sainte-Anne, the tenth university, is located in Pointe-de-l'Église and instructs its academic courses in French. The University of Toronto has the largest student population of any university in Canada.

There are 22 publicly funded universities in the Canadian province of Ontario that are post-secondary education institutions with degree-granting authority.[23] Each of these institutions were either established through an Act of the Legislative Assembly or through a Royal Charter.[24] With the exception of Royal Military College of Canada, students apply to public universities in Ontario through the Ontario Universities' Application Centre.

There is one university in Prince Edward Island that is authorized to grant degrees.[14] Higher education in the province falls under the jurisdiction of the Higher Education and Corporate Services Branch within the Department of Education and Early Childhood Development.[27] The only university in the province, the University of Prince Edward Island, is in the province's capital of Charlottetown. The institution resulted from an amalgamation of Prince of Wales College, a former university college founded in 1834, and Saint Dunstan's University, founded in 1855.[28] UPEI hosts the Atlantic Veterinary College, funded by the four Atlantic provincial governments.[29] Established in 1663, Université Laval is the oldest post-secondary institution in Canada. McGill University is the oldest anglophone university in the province of Quebec.

There are 19 universities in the largely French-speaking province of Quebec, 10 of which form the Université du Québec network.

In Québec, universities are independent from government and autonomous in managing their affairs. By means of legislation or constitutional charters, lawmakers have granted each university the freedom to define its own curriculum and develop its own teaching and research programs. The university has full responsibility for setting admission standards and enrolment requirements, awarding degrees and recruiting its personnel.

Of the nineteen universities, three are anglophone: Concordia University, McGill University and Bishop's University. One, the Royal Military College Saint-Jean, is bilingual (between French and English). The rest are francophone: five of them – École de technologie supérieure, Polytechnique Montréal, HEC Montréal, Université de Montréal and Université du Québec à Montréal – are located in Montreal, the most populated city in Quebec, and four of them – École nationale d'administration publique, Institut national de la recherche scientifique, TÉLUQ and Université Laval – are based in Quebec City, the province's capital. The Institut national de la recherche scientifique and École nationale d'administration publique do not offer undergraduate level programs, while TÉLUQ is a distance learning university.

The oldest university in the province is Université Laval, established in 1663. The most recent institutions are: Université du Québec en Abitibi-Témiscamingue (1983), Concordia University (1974), École de technologie supérieure (1974), TÉLUQ (1972, merged with UQÀM in 2005, split in 2012). University enrolment in the province of Quebec ranges from the Institut national de la recherche scientifique with 480 students to the Université de Montréal with 55,540 students (but this figure actually includes HEC and Polytechnique, which are legally distinct universities). The University of Saskatchewan holds the highest enrollment numbers out of any university in the province.

The following is a list of public universities (by province/territory) that are authorized to issue degrees. The following list does not include affiliated institutions and seminaries, whose degrees are typically awarded by the affiliate's parent institution.

The following is a list of private universities that are authorized to issue degrees by a provincial authority. The following list does not include satellite campuses and branches in Canada for universities based in the United States. All of them are English language institutions.

This article includes an education-related list of lists.
Categories
Categories: