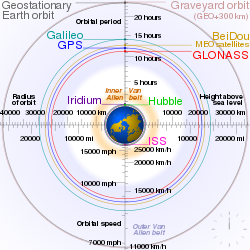 A low Earth orbit (LEO) is an orbit around Earth with a period of 128 minutes or less (making at least 11.25 orbits per day) and an eccentricity less than 0.25.[1] Most of the artificial objects in outer space are in LEO, with an altitude never more than about one-third of the radius of Earth.[2]

The term LEO region is also used for the area of space below an altitude of 2,000 km (1,200 mi) (about one-third of Earth's radius).[3] Objects in orbits that pass through this zone, even if they have an apogee further out or are sub-orbital, are carefully tracked since they present a collision risk to the many LEO satellites.

A wide variety of sources[4][5][6] define LEO in terms of altitude. The altitude of an object in an elliptic orbit can vary significantly along the orbit. Even for circular orbits, the altitude above ground can vary by as much as 30 km (19 mi) (especially for polar orbits) due to the oblateness of Earth's spheroid figure and local topography. While definitions based on altitude are inherently ambiguous, most of them fall within the range specified by an orbit period of 128 minutes because, according to Kepler's third law, this corresponds to a semi-major axis of 8,413 km (5,228 mi). For circular orbits, this in turn corresponds to an altitude of 2,042 km (1,269 mi) above the mean radius of Earth, which is consistent with some of the upper altitude limits in some LEO definitions.

The pull of gravity in LEO is only slightly less than on the Earth's surface. This is because the distance to LEO from the Earth's surface is much less than the Earth's radius. However, an object in orbit is in a permanent free fall around Earth, because in orbit both, the gravitational force and the centrifugal force balance out each other.[c] As a result, spacecraft in orbit continue to stay in orbit, and people inside or outside such craft continuously experience weightlessness.

Objects in LEO encounter atmospheric drag from gases in the thermosphere (approximately 80–600 km above the surface) or exosphere (approximately 600 km or 400 mi and higher), depending on orbit height. Orbits of satellites that reach altitudes below 300 km (190 mi) decay fast due to atmospheric drag. Objects in LEO orbit Earth between the denser part of the atmosphere and below the inner Van Allen radiation belt.

Equatorial low Earth orbits (ELEO) are a subset of LEO. These orbits, with low inclination to the Equator, allow rapid revisit times of low-latitude places on Earth and have the lowest delta-v requirement (i.e., fuel spent) of any orbit, provided they have the direct (not retrograde) orientation with respect to the Earth's rotation. Orbits with a very high inclination angle to the equator are usually called polar orbits or Sun-synchronous orbits.

In 2017, "very low Earth orbits" (VLEO) began to be seen in regulatory filings. These orbits, below about 450 km (280 mi), require the use of novel technologies for orbit raising because they operate in orbits that would ordinarily decay too soon to be economically useful.[10][11]

Roughly half an orbit of the International Space Station.

A low Earth orbit requires the lowest amount of energy for satellite placement. It provides high bandwidth and low communication latency. Satellites and space stations in LEO are more accessible for crew and servicing.

Since it requires less energy to place a satellite into a LEO, and a satellite there needs less powerful amplifiers for successful transmission, LEO is used for many communication applications, such as the Iridium phone system. Some communication satellites use much higher geostationary orbits and move at the same angular velocity as the Earth as to appear stationary above one location on the planet.

Unlike geosynchronous satellite, satellites in LEO have a small field of view and so can observe and communicate with only a fraction of the Earth at a time. That means that a network (or "constellation") of satellites is required to provide continuous coverage. Satellites in lower regions of LEO also suffer from fast orbital decay and require either periodic re-boosting to maintain a stable orbit or launching replacement satellites when old ones re-enter.

The LEO environment is becoming congested with space debris because of the frequency of object launches.[16] This has caused growing concern in recent years, since collisions at orbital velocities can be dangerous or deadly. Collisions can produce additional space debris, creating a domino effect known as Kessler syndrome. The Orbital Debris Program, part of NASA, tracks over 25,000 objects larger than 10 cm in LEO, the estimated number between 1 and 10 cm in diameter is 500,000. The amount of particles bigger than 1 mm exceeds 100 million.[17] The particles travel at speeds up to 7.8 km/s (28,000 km/h; 17,500 mph), so even a small particle impact can severely damage a spacecraft.[18]