Mobile broadband is the marketing term for wireless Internet access through a portable modem, USB wireless modem, or a tablet/smartphone or other mobile device. The first wireless Internet access became available in 1991 as part of the second generation (2G) of mobile phone technology. Higher speeds became available in 2001 and 2006 as part of the third (3G) and fourth (4G) generations. In 2011, 90% of the world's population lived in areas with 2G coverage, while 45% lived in areas with 2G and 3G coverage.[1] Mobile broadband uses the spectrum of 225 MHz to 3700 MHz.[2]

Mobile broadband is the marketing term for wireless Internet access delivered through cellular towers to computers and other digital devices using portable modems. Although broadband has a technical meaning, wireless-carrier marketing uses the phrase "mobile broadband" as a synonym for mobile Internet access. Some mobile services allow more than one device to be connected to the Internet using a single cellular connection using a process called tethering.[3]

The bit rates available with Mobile broadband devices support voice and video as well as other data access. Devices that provide mobile broadband to mobile computers include:

The download (to the user) and upload (to the Internet) data rates given above are peak or maximum rates and end users will typically experience lower data rates.

WiMAX was originally developed to deliver fixed wireless service with wireless mobility added in 2005. CDPD, CDMA2000 EV-DO, and MBWA are no longer being actively developed.

Mobile broadband Internet subscriptions in 2012
as a percentage of a country's population
Source: International Telecommunications Union.[8]

A barrier to mobile broadband use is the coverage provided by the mobile service networks. This may mean no mobile network or that service is limited to older and slower mobile broadband technologies. Customers will not always be able to achieve the speeds advertised due to mobile data coverage limitations including distance to the cell tower. In addition, there are issues with connectivity, network capacity, application quality, and mobile network operators' overall inexperience with data traffic.[10] Peak speeds experienced by users are also often limited by the capabilities of their mobile phone or other mobile device.[9]

At the end of 2012 there were estimated to be 6.6 billion mobile network subscriptions worldwide (89% penetration), representing roughly 4.4 billion subscribers (many people have more than one subscription). Growth has been around 9% year-on-year.[15] Mobile phone subscriptions were expected to reach 9.3 billion in 2018.[9]

Mobile data traffic doubled between the end of 2011 (~620 Petabytes in Q4 2011) and the end of 2012 (~1280 Petabytes in Q4 2012).[15] This traffic growth is and will continue to be driven by large increases in the number of mobile subscriptions and by increases in the average data traffic per subscription due to increases in the number of smartphones being sold, the use of more demanding applications and in particular video, and the availability and deployment of newer 3G and 4G technologies capable of higher data rates. Total mobile broadband traffic was expected to increase by a factor of 12 to roughly 13,000 PetaBytes by 2018 .[9]

On average, a mobile laptop generates approximately seven times more traffic than a smartphone (3 GB vs. 450 MB/month). This ratio was forecast to fall to 5 times (10 GB vs. 2 GB/month) by 2018. Traffic from mobile devices that tether (share the data access of one device with multiple devices) can be up to 20 times higher than that from non-tethering users and averages between 7 and 14 times higher.[9]

It has also been shown that there are large differences in subscriber and traffic patterns between different provider networks, regional markets, device and user types.[9] 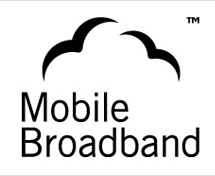 In use and under active development

In 1995 telecommunication, mobile phone, integrated-circuit, and laptop computer manufacturers formed the GSM Association to push for built-in support for mobile-broadband technology on notebook computers. The association established a service mark to identify devices that include Internet connectivity.[17] Established in early 1998, the global Third Generation Partnership Project (3GPP) develops the evolving GSM family of standards, which includes GSM, EDGE, WCDMA/UMTS, HSPA, LTE and NR.[18] In 2011 these standards were the most used method to deliver mobile broadband.[citation needed] With the development of the 4G LTE signalling standard, download speeds could be increased to 300 Mbit/s per second within the next several years.[19]

The IEEE working group IEEE 802.16, produces standards adopted in products using the WiMAX trademark. The original "Fixed WiMAX" standard was released in 2001 and "Mobile WiMAX" was added in 2005.[20] The WiMAX Forum is a non-profit organization formed to promote the adoption of WiMAX compatible products and services.[21]

In use, but moving to other protocols

In 2002, the Institute of Electrical and Electronics Engineers (IEEE) established a Mobile Broadband Wireless Access (MBWA) working group.[23] They developed the IEEE 802.20 standard in 2008, with amendments in 2010.[24]

Edholm's law in 2004 noted that the bandwidths of wireless cellular networks have been increasing at a faster pace compared to wired telecommunications networks.[25] This is due to advances in MOSFET wireless technology enabling the development and growth of digital wireless networks.[26] The wide adoption of RF CMOS (radio frequency CMOS), power MOSFET and LDMOS (lateral diffused MOS) devices led to the development and proliferation of digital wireless networks in the 1990s, with further advances in MOSFET technology leading to rapidly increasing network bandwidth since the 2000s.[27][28][29]