A telephone is a telecommunications device that permits two or more users to conduct a conversation when they are too far apart to be easily heard directly. A telephone converts sound, typically and most efficiently the human voice, into electronic signals that are transmitted via cables and other communication channels to another telephone which reproduces the sound to the receiving user. The term is derived from Greek: τῆλε (tēle, far) and φωνή (phōnē, voice), together meaning distant voice. A common short form of the term is phone, which came into use early in the telephone's history.

In 1876, Alexander Graham Bell was the first to be granted a United States patent for a device that produced clearly intelligible replication of the human voice at a second device. This instrument was further developed by many others, and became rapidly indispensable in business, government, and in households. (Full article...)

A smartphone is a portable computer device that combines mobile telephone and computing functions into one unit. They are distinguished from feature phones by their stronger hardware capabilities and extensive mobile operating systems, which facilitate wider software, internet (including web browsing over mobile broadband), and multimedia functionality (including music, video, cameras, and gaming), alongside core phone functions such as voice calls and text messaging. Smartphones typically contain a number of metal–oxide–semiconductor (MOS) integrated circuit (IC) chips, include various sensors that can be leveraged by pre-included and third-party software (such as a magnetometer, proximity sensors, barometer, gyroscope, accelerometer and more), and support wireless communications protocols (such as Bluetooth, Wi-Fi, or satellite navigation). (Full article...) Face of a 1939 rotary dial showing the telephone number LA-2697, which includes the first two letters of Lakewood, New Jersey

The large cities were served by multiple or many switching systems, either distributed in the community constituting multiple exchange areas, or sometimes hosted in the same building to serve a densely populated area. The leading letters of a central office name were used as the leading components of the telephone number representation, so that each telephone number in the town or city was unique. These letters were mapped to digits, which was indicated visibly on a dial telephone.

Several systematic telephone numbering plans existed in various communities, typically evolving over time as the subscriber base outgrew older numbering schemes. A widely used numbering plan was a system of using one or two letters from the central office name with four or five digits. Such systems were designated as 2L-4N or 2L-5N, or simply 2–4 and 2–5, respectively, but some large cities initially selected plans with three letters (3L-4N). In 1917, W. G. Blauvelt of AT&T proposed a mapping system that displayed three letters each with the digits 2 through 9 on the dial. (Full article...)

Types of phones - show another

A phablet (/ˈfæblət/, /-lɪt/) is a mobile device combining or straddling the size formats of smartphones and tablets. The word is a portmanteau of phone and tablet.

Phablets feature large displays that complement screen-intensive activity such as mobile web browsing and multimedia viewing. They may also include software optimized for an integral self-storing stylus to facilitate sketching, note-taking and annotation. Phablets were originally designed for the Asian market where consumers could not afford both a smartphone and tablet as in North America; phones for that market are known for having "budget-specs-big-battery" with large low resolution screens and midrange processors, although other phablets have flagship specifications. Since then, phablets in North America have also become successful for several reasons: Android 4.0 and subsequent releases of Android were suited to large as well as small screen sizes, while older consumers preferred larger screen sizes on smartphones due to deteriorating eyesight. Examples of earlier devices with similar form factors date to 1993. The term "phablet" was widespread in the industry from 2012 to 2014 although its usage has declined since as average smartphone sizes eventually morphed into small tablet sizes, up to 6.9 inches.

As of 2020, most budget and entry-level Android smartphones constitute the phablet form factor, as they utilize a minimum of 6.5-inch screen size and a height of 160 mm or higher. This was first popularized by Chinese brands Oppo and Infinix Mobile in 2019, which began producing larger-screen budget smartphones for developing markets such as Bangladesh, India, South Africa and Indonesia. Samsung also started producing large-screen budget smartphones since 2020, with the introduction of Samsung Galaxy A21. (Full article...)
edit

Dual-tone multi-frequency signaling (DTMF) is a telecommunication signaling system using the voice-frequency band over telephone lines between telephone equipment and other communications devices and switching centers. DTMF was first developed in the Bell System in the United States, and became known under the trademark Touch-Tone for use in push-button telephones supplied to telephone customers, starting in 1963. DTMF is standardized as ITU-T Recommendation Q.23. It is also known in the UK as MF4. (Full article...)

The following are images from various telephone-related articles on Wikipedia. 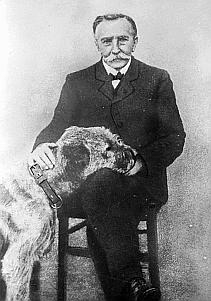 Charles Bourseul (28 April 1829 – 23 November 1912) was a pioneer in development of the "make and break" telephone about 20 years before Bell made a practical telephone.

Bourseul was born in Brussels, Belgium, and grew up in Douai, France. His father was a French army officer. Charles worked for the telegraph company as a civil engineer and mechanic. He made improvements to the telegraph system of L. F. Breguet (a French instrument maker) and Samuel F. B. Morse. Charles Bourseul experimented with the electrical transmission of the human voice and developed an electromagnetic microphone, but his telephone receiver was unable to convert electric current back into clear human voice sounds.

In 1854 Bourseul wrote a memorandum on the transmission of the human voice by electric currents that was first published in a magazine L'Illustration (Paris), though no prototype was built. That is about the same time that Meucci later claimed to have created his first attempt at the telephone in Italy. (Full article...)

Telephones in the news
No recent news