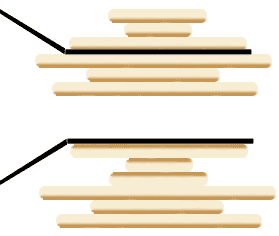 Demonstration of the primary operation. The spatula is flipping over the top three pancakes, with the result seen below. In the burnt pancake problem, their top sides would now be burnt instead of their bottom sides.

Pancake sorting is the mathematical problem of sorting a disordered stack of pancakes in order of size when a spatula can be inserted at any point in the stack and used to flip all pancakes above it. A pancake number is the minimum number of flips required for a given number of pancakes. In this form, the problem was first discussed by American geometer Jacob E. Goodman.[1] A variant of the problem is concerned with burnt pancakes, where each pancake has a burnt side and all pancakes must, in addition, end up with the burnt side on bottom.

The simplest pancake sorting algorithm performs at most 2n − 3 flips. In this algorithm, a kind of selection sort, we bring the largest pancake not yet sorted to the top with one flip; take it down to its final position with one more flip; and repeat this process for the remaining pancakes.

In 1979, Bill Gates and Christos Papadimitriou[3] gave a lower bound of 1.06n flips and an upper bound of (5n+5)/3. The upper bound was improved, thirty years later, to 18/11n by a team of researchers at the University of Texas at Dallas, led by Founders Professor Hal Sudborough.[4][5]

In 2011, Laurent Bulteau, Guillaume Fertin, and Irena Rusu[6] proved that the problem of finding the shortest sequence of flips for a given stack of pancakes is NP-hard, thereby answering a question that had been open for over three decades.

In a variation called the burnt pancake problem, the bottom of each pancake in the pile is burnt, and the sort must be completed with the burnt side of every pancake down. It is a signed permutation, and if a pancake i is "burnt side up" a negative element i` is put in place of i in the permutation. In 2008, a group of undergraduates built a bacterial computer that can solve a simple example of the burnt pancake problem by programming E. coli to flip segments of DNA which are analogous to burnt pancakes. DNA has an orientation (5' and 3') and an order (promoter before coding). Even though the processing power expressed by DNA flips is low, the high number of bacteria in a culture provides a large parallel computing platform. The bacteria report when they have solved the problem by becoming antibiotic resistant.[7]

This section needs additional citations for verification. Please help improve this article by adding citations to reliable sources. Unsourced material may be challenged and removed.Find sources: "Pancake sorting" – news · newspapers · books · scholar · JSTOR (September 2019) (Learn how and when to remove this template message)

This is inspired from the way Indian bread (roti or chapati) is cooked. Initially, all rotis are stacked in one column, and the cook uses a spatula to flip the rotis so that each side of each roti touches the base fire at some point to toast. Several variants are possible: the rotis can be considered as single-sided or two-sided, and it may be forbidden or not to toast the same side twice. This version of the problem was first explored by Arka Roychowdhury.[8]

The pancake problem on strings

Although seen more often as an educational device, pancake sorting also appears in applications in parallel processor networks, in which it can provide an effective routing algorithm between processors.[11][12]

The problem is notable as the topic of the only well-known mathematics paper by Microsoft founder Bill Gates (as William Gates), entitled "Bounds for Sorting by Prefix Reversal" and co-authored with Christos Papadimitriou. Published in 1979, it describes an efficient algorithm for pancake sorting.[3] In addition, the most notable paper published by Futurama co-creator David X. Cohen (as David S. Cohen), co-authored with Manuel Blum, concerned the burnt pancake problem.[13] The pancake graph P4 can be constructed recursively from 4 copies of P3 by assigning a different element from the set {1, 2, 3, 4} as a suffix to each copy.

An n-pancake graph is a graph whose vertices are the permutations of n symbols from 1 to n and its edges are given between permutations transitive by prefix reversals. It is a regular graph with n! vertices, its degree is n−1. The pancake sorting problem and the problem to obtain the diameter of the pancake graph is equivalent.[17]

The pancake graph of dimension n, Pn can be constructed recursively from n copies of Pn−1, by assigning a different element from the set {1, 2, …, n} as a suffix to each copy.

Since pancake graphs have many interesting properties such as symmetric and recursive structures, small degrees and diameters compared against the size of the graph, much attention is paid to them as a model of interconnection networks for parallel computers.[19][20][21] When we regard the pancake graphs as the model of the interconnection networks, the diameter of the graph is a measure that represents the delay of communication.[22][23]

The pancake graphs are Cayley graphs (thus are vertex-transitive) and are especially attractive for parallel processing. They have sublogarithmic degree and diameter, and are relatively sparse (compared to e.g. hypercubes).[18]

An example of the pancake sorting algorithm is given below in Python. The code is similar to bubble sort or selection sort.

Sequences from The Online Encyclopedia of Integer Sequences: