Slow motion (commonly abbreviated as slo-mo or slow-mo) is an effect in film-making whereby time appears to be slowed down. It was invented by the Austrian priest August Musger in the early 20th century. This can be accomplished through the use of high-speed cameras and then playing the footage produced by such cameras at a normal rate like 30 fps, or in post production through the use of software.

Typically this style is achieved when each film frame is captured at a rate much faster than it will be played back. When replayed at normal speed, time appears to be moving more slowly. A term for creating slow motion film is overcranking which refers to hand cranking an early camera at a faster rate than normal (i.e. faster than 24 frames per second). Slow motion can also be achieved by playing normally recorded footage at a slower speed. This technique is more often applied to video subjected to instant replay than to film. A third technique that is becoming common using current computer software post-processing is to fabricate digitally interpolated frames to smoothly transition between the frames that were actually shot. Motion can be slowed further by combining techniques, such as for example by interpolating between overcranked frames. The traditional method for achieving super-slow motion is through high-speed photography, a more sophisticated technique that uses specialized equipment to record fast phenomena, usually for scientific applications.

Slow motion is ubiquitous in modern filmmaking. It is used by a diverse range of directors to achieve diverse effects. Some classic subjects of slow-motion include:

Slow motion can also be used for artistic effect, to create a romantic or suspenseful aura or to stress a moment in time. Vsevolod Pudovkin, for instance, used slow motion in a suicide scene in his 1933 film The Deserter, in which a man jumping into a river seems sucked down by the slowly splashing waves. Another example is Face/Off, in which John Woo used the same technique in the movements of a flock of flying pigeons. The Matrix made a distinct success in applying the effect into action scenes through the use of multiple cameras, as well as mixing slow-motion with live action in other scenes. Japanese director Akira Kurosawa was a pioneer using this technique in his 1954 movie Seven Samurai. American director Sam Peckinpah was another classic lover of the use of slow motion. The technique is especially associated with explosion effect shots and underwater footage.[citation needed]

The opposite of slow motion is fast motion. Cinematographers refer to fast motion as undercranking since it was originally achieved by cranking a handcranked camera slower than normal. It is often used for comic, or occasional stylistic effect. Extreme fast motion is known as time lapse photography; a frame of, say, a growing plant is taken every few hours; when the frames are played back at normal speed, the plant is seen to grow before the viewer's eyes.

The concept of slow motion may have existed before the invention of the motion picture: the Japanese theatrical form Noh employs very slow movements.

There are two ways in which slow motion can be achieved in modern cinematography. Both involve a camera and a projector. A projector refers to a classical film projector in a movie theater, but the same basic rules apply to a television screen and any other device that displays consecutive images at a constant frame rate.[1]

For purposes of making the above illustration readable, a projection speed of 10 frames per second (fps) has been selected (the 24 fps film standard makes slow overcranking rare but nevertheless available on professional equipment).[2]

Frames marked with an X must be fabricated.

Since the necessary frames were never photographed, new frames must be fabricated. Sometimes the new frames are simply repeats of the preceding frames but more often they are created by interpolating between frames. (Often this motion interpolation is, effectively, a short dissolve between still frames). Many complicated algorithms exist that can track motion between frames and generate intermediate frames within that scene. It is similar to half-speed, and is not true slow-motion but merely a longer display of each frame. 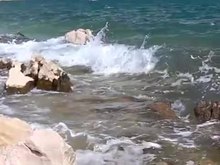 Slow motion is used widely in action films for dramatic effect, as well as the famous bullet-dodging effect, popularized by The Matrix. Formally, this effect is referred to as speed ramping and is a process whereby the capture frame rate of the camera changes over time. For example, if in the course of 10 seconds of capture, the capture frame rate is adjusted from 60 frames per second to 24 frames per second, when played back at the standard film rate of 24 frames per second, a unique time-manipulation effect is achieved. For example, someone pushing a door open and walking out into the street would appear to start off in slow motion, but in a few seconds later within the same shot the person would appear to walk in "realtime" (everyday speed). The opposite speed-ramping is done in The Matrix when Neo re-enters the Matrix for the first time to see the Oracle. As he comes out of the warehouse "load-point", the camera zooms into Neo at normal speed but as it gets closer to Neo's face, time seems to slow down, perhaps visually accentuating Neo pausing and reflecting a moment, and perhaps alluding to future manipulation of time itself within the Matrix later on in the movie.

Slow-motion is widely used in sport broadcasting and its origins in this domain extend back to the earliest days of television, one example being the European Heavyweight Title in 1939 where Max Schmeling knocked out Adolf Heuser in 71 seconds.[3]

In instant replays, slow motion reviews are now commonly used to show in detail some action (photo finish, goal, ...). Generally, they are made with video servers and special controllers. The first TV slo-mo was the Ampex HS-100 disk record-player. After the HS-100, Type C videotape VTRs with a slow-motion option were used. There were a few special high frame rate TV systems (300 fps) made to give higher quality slow-motion for TV. 300 fps can be converted to both 50 and 60 fps transmission formats without major issues.

In scientific and technical applications it is often necessary to slow motion by a very large factor, for example to examine the details of a nuclear explosion. Examples are sometimes published showing, for example, a bullet bursting a balloon.

The real time method treats the video as a normal video while encoding it. The output video file contains the same framerate as the image sensor output framerate. The duration of the video in the output file also matches the real-life recording duration. And the output video also contains an audio track, like usual videos.

These advantages make the real-time method the more useful method for power users.

The menial method saves recorded video files in a stretched way, and also without audio track. The framerate in the output file does not match the original sensor output framerate, but the former is lower. The real-life timespan of the recording (while holding the camera) does not match the length of the video in the output file, but the latter is longer. The opposite is the case for time-lapse videos, where the effectively saved framerate is lower than for normal videos

This means that the action visible inside the video runs at slower speeds than in real life, despite the indicated playback speed of ×1.

This encoding method is used by the camera software of the following devices (incomplete list):

A 120FPS video whose real-life recording duration is 00h:00m:10s can be encoded in the following methods seen in the table on the Samsung Galaxy Note 2, S4, Note 3, S5 and Note 4 (example devices that use the menial method for 120fps video recording).

In this example, the real-time-method recording device can be an iPhone 5s, a Galaxy S6 (including variants), a Galaxy Note 5, a Sony Xperia Z2, Xperia Z3 or Xperia Z5.