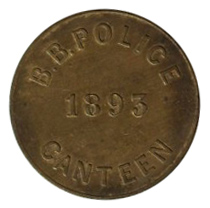 In numismatics, token coins or trade tokens are coin-like objects used instead of coins. The field of token coins is part of exonumia and token coins are token money. Their denomination is shown or implied by size, color or shape. They are often made of cheaper metals like copper, pewter, aluminium, brass and tin, or non-metals like bakelite, leather and porcelain.[citation needed]

A legal tender coin is issued by a governmental authority and is freely exchangeable for goods. A token coin is less useful and issued by a private entity.

A brothel token from the Red Dog Saloon.

Coin-like objects from the Roman Empire called spintriae have been interpreted as an early form of token. Their functions are not documented, but they appear to have been brothel tokens or possibly gaming tokens.[1]

Medieval English monasteries issued tokens to pay for services from outsiders. These tokens circulated in nearby villages, where they were called "Abbot's money". Also, counters called jetons were used as small change without official blessing.[2]

From the 17th to the early 19th century in the British Isles (and also elsewhere in the British Empire) and North America, tokens were commonly issued by merchants in times of acute shortage of coins of the state. These tokens were in effect a pledge redeemable in goods, but not necessarily for currency. These tokens never received official sanction from government but were accepted and circulated quite widely.

In England, the production of copper farthings was permitted by royal licence in the first few decades of the 17th century, but production ceased during the English Civil War and a great shortage of small change resulted. This shortage was felt more keenly because of the rapid growth of trade in the towns and cities, and this in turn prompted both local authorities and merchants to issue tokens.

These tokens were most commonly made of copper or brass, but pewter, lead and occasionally leather tokens are also found. Most were not given a specific denomination and were intended to substitute for farthings, but there are also a large number of halfpenny and sometimes penny tokens. Halfpenny and penny tokens usually, but not always, bear the denomination on their face. Most such tokens show the issuer's full name or initials. Where initials were shown, it was common practice to show three initials: the first names of husband and wife and their surname. Tokens would also normally indicate the merchant establishment, either by name or by picture. Most were round, but they are also found in square, heart or octagonal shapes.

Thousands of towns and merchants issued these tokens from 1648 until 1672, when official production of farthings resumed, and private production was suppressed.

There were again coin shortages in the late 18th century, when the British Royal Mint almost ceased production. Merchants once again produced tokens, but they were now machine made and typically larger than their 17th century predecessors, with values of a halfpenny or more. While many were used in trade, they were also produced for advertising and political purposes, and some series were produced for the primary purpose of sale to collectors. These tokens are usually known as Conder tokens, after the writer of the first reference book on them.

These were issued by merchants in payment for goods with the agreement that they would be redeemed in goods to an equivalent value at the merchants' own outlets. The transaction is therefore one of barter, with the tokens playing a role of convenience, allowing the seller to receive his goods at a rate and time convenient to himself, and the merchant to tie the holder of the token coin to his shop. Trade tokens often gradually changed into barter tokens, as evidenced by the continued circulation of former trade tokens when the need for their use had passed.

In the United States of America, Hard times tokens issued from 1832 to 1844 and Civil War tokens issued in the 1860s made up for shortages of official money.[3]

Because of weight, the U.S. Treasury Department does not ship coins to the Armed Forces serving overseas, so Army and Air Force Exchange Service officials chose to make pogs in denominations of 5, 10, and 25 cents. The pogs are about 38 mm (1.5816″ to be exact) in diameter, and feature various military-themed graphics.

The collecting of trade tokens is part of the field of exonumia, and includes other types of tokens, including transit tokens, encased cents, and many others. In a narrow sense, trade tokens are "good for" tokens, issued by merchants. Generally, they have a merchant's name or initials, sometimes a town and state, and a value legend (such as "good for 5¢" or other denomination) somewhere on the token. Merchants that issued tokens included general stores, grocers, department stores, dairies, meat markets, drug stores, saloons, bars, taverns, barbers, coal mines, lumber mills and many other businesses. The era of 1870 through 1920 marked the highest use of "trade tokens" in the United States, spurred by the proliferation of small stores in rural areas. There were thousands of small general and merchandise stores all over the United States, and many of them used trade tokens to promote trade and extend credit to customers. Aluminum tokens almost always date after 1890, when low-cost production began.

Token coins in an arcade game

Metal token coins are used in lieu of cash in some coin-operated arcade games and casino slot machines. Money is exchanged for the token coins or chips in a casino at the casino cage, gaming tables, slot machines or cashier stations for slot token coins. The tokens are interchangeable with money at the casino and generally have no value outside of the casino.

In many jurisdictions, casinos are not permitted to use currency in slot machines, necessitating tokens for smaller denominations. After the increase in the value of silver stopped the circulation of silver coins in the United States around 1964, casinos rushed to find a substitute, as most slot machines at that time used that particular coin. The Nevada State Gaming Control Board consulted with the U.S. Treasury, and casinos were soon allowed to start using their own tokens to operate their slot machines. The Franklin Mint was the main minter of casino tokens at that time.

In 1971, many casinos adopted the Eisenhower Dollar for use in machines and on tables. When the dollar was replaced with the Susan B. Anthony dollar in 1979, most casinos reinstituted tokens, fearing confusion with quarters and not wishing to extensively retool their slot machines. Those casinos which still use tokens in slot machines still use Eisenhower-sized ones.

Tokens are being phased out by many casinos in favor of coinless machines which accept banknotes and print receipts for payout. These receipts, abbreviated "TITOs" for ticket-in, ticket-out, can also be inserted into the machines. In video arcades, they are also being phased out in favor of magnetic cards, which can also count how many tickets one has, allowing arcades to also do away with paper tickets.

Obverse and reverse of a Toronto Transit Commission (TTC) single-ride token (designed in 2006). With the arrival of the inter-regional Presto smart card, the TTC planned to phase them out by the end of 2019. Railways and public transport agencies used fare tokens for years, to sell rides in advance at a discount, or to allow patrons to use turnstiles geared only to take tokens (as opposed to coins, currency, or fare cards). Many transport organizations still offer their own tokens for bus and subway services, toll bridges, tunnels, and highways, although the use of computer-readable tickets has replaced these in most areas.

Australian ALDI cart token, sold in-store for A$0.99, and sized the same as a $2 coin which can also be used to unlock a trolley

In North America tokens were originally issued by merchants from the 18th century in regions where national or local colonial governments did not issue enough small denomination coins for circulation. They were later used to create a monopoly[further explanation needed]; to pay labor; for discounts (pay in advance, get something free or discounted); or for a multitude of other reasons. In the United States, a well-known type is the wooden nickel, a five-cent piece distributed by cities to raise money for their anniversaries in the 1940s to 1960s.

Churches used to give tokens to members passing a religious test prior to the day of communion, then required the token for entry. While mostly Scottish Protestant, some U.S. churches used communion tokens. Generally, these were pewter, often cast by the minister in church-owned molds. Replicas of these tokens have been made available for sale at some churches recently.[when?]