listen), "Valley of the Marne") is a French department, named after the river Marne, located in the Île-de-France region. The department is situated to the southeast of the city of Paris and in the Grand Paris.

Val-de-Marne is, together with Seine-Saint-Denis and Hauts-de-Seine, one of three small departments in Île-de-France that form a ring around Paris, known as the Petite Couronne (i.e. "inner ring"). Since January 1, 2016 Val de Marne is included in Métropole du Grand Paris. 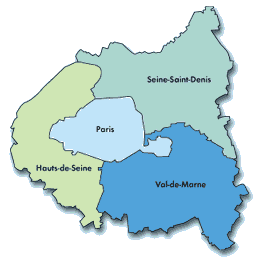 Val-de-Marne is made up of 3 departmental arrondissements and 47 communes: Val-de-Marne was created in January 1968, through the implementation of a law passed in July 1964. Positioned to the south-east of the Paris ring road (and the line of the old city walls), it was formed from the southern-eastern part of the (previously much larger) Seine department, together with a small portion taken from the broken-up department of Seine-et-Oise.

Place of birth of residents