Aridoamerica denotes an ecological region spanning Northern Mexico and the Southwestern United States, defined by the presence of the culturally significant staple foodstuff Phaseolus acutifolius, a drought-resistant bean.[1] Its dry, arid climate and geography stand in contrast to the verdant Mesoamerica of present-day central Mexico into Central America[2] to the south and east, and the higher, milder "island" of Oasisamerica to the north. Aridoamerica overlaps with both.[1]

Because of the relatively hard conditions, the pre-Columbian people in this region developed distinct cultures and subsistence farming patterns. The region has only 120 mm (4.7 in) to 160 mm (6.3 in) of annual precipitation. The sparse rainfall feeds seasonal creeks and waterholes.[3]

The term was introduced by American anthropologist Gary Paul Nabhan in 1985,[4] building on prior work by anthropologists A. L. Kroeber and Paul Kirchhoff to identify a "true cultural entity" for the desert region. Kirchhoff was first in introducing the term 'Arid America', in his 1954 seminal article, writing: "I propose for that of the gatherers the name "Arid America" and "Arid American Culture," and for that of the farmers "Oasis America" and "American Oasis Culture"".[5]

Mexican anthropologist Guillermo Bonfil Batalla notes that although the distinction between Aridoamerica and Mesoamerica is "useful for understanding the general history of precolonial Mexico," that the boundary between the two should not be conceptualized as "a barrier that separated two radically different worlds, but, rather, as a variable limit between climatic regions." The inhabitants of Aridoamerica lived on "an unstable and fluctuating frontier" and were in "constant relations with the civilizations to the south."[6] The Chichimeca, an umbrella term for several tribes used by the Nahua people, were hunter-gatherers in Aridoamerica grasslands. They gathered magueys, yucca flowers, mesquite beans, chia seeds, and cacti, including the paddles of fruits of nopal cactus. The century plant (Agave americana) is a particularly important resource in the region.[7]

Despite dry conditions, Aridoamerica boasts the greatest diversity of wild and domesticated tepary beans (Phaseolus acutifolius) and is a possible site of their domestication.[1] Maize cultivation reached Aridoamerica by about 2100 BCE.[8] Archaeologists disagree whether the plant was introduced by Uto-Aztecan migrants from Mesoamerica or spread either northward or southward from other groups by cultural borrowing.[8]

In Baja California, fishing and hunting provided food, as did harvesting acorns, nopal, pine nuts, and other native plants.[9]

Historically, people of Aridoamerica coppiced willows, that is, tree trunks were cut to a stump to encourage the growth of slender shoots. These willow shoots were woven tightly to produce waterproof, cooking baskets. Fire-heated rocks were plunged into a gruel in the baskets to cook.[3]

The elevation in the Chihuahuan Desert varies from 1970 to 5500 feet, as there are several smaller mountain ranges contained in the area, namely the San Andres, Doña Anas, and Franklin Mountains. The Chihuahuan is a "rain shadow" desert, formed between two mountain ranges (the Sierra Madre Occidental on the west and the Sierra Madre Oriental on the east) which block oceanic precipitation from reaching the area.[10] The Chihuahuan Desert is considered the "most biologically diverse desert in the Western Hemisphere and one of the most diverse in the world", and includes more species of cacti than any other desert in the world.[11] The most prolific plants in this region are agave, yucca and creosote bushes,[12] in addition to the ubiquitous presence of various cacti species. 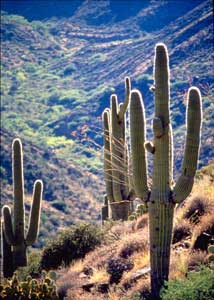 Saguaro cactus in the Sonoran Desert.

When people think of the desert southwest, the landscape of the Sonoran Desert is what mostly comes to mind.[12] The Sonoran Desert makes up the southwestern portion of the Southwest. Rainfall averages between 4–12 inches per year, and the desert's most widely known inhabitant is the saguaro cactus, which is unique to the desert.[13][14] It is bounded on the northwest by the Mojave Desert, to the north by the Colorado Plateau and to the east by the Arizona Mountains forests and the Chihuahuan Desert.[15] Aside from the trademark saguaro, the desert has the most diverse plant life of any desert in the world,[13] and includes many other species of cacti, including the organ-pipe, senita, prickly pear, barrel, fishhook, hedgehog, cholla, silver dollar, and jojoba.[13][14]

The most northwest portion of Aridoamerica is covered by the Mojave Desert. In terms of topography, the Mojave is very similar to the Great Basin Desert, which lies just to its north.[12] The Mojave gets less than six inches of rain annually, and its elevation ranges from 3000 to 6000 feet above sea level.[16] The most prolific vegetation is the tall Joshua tree, which grow as tall as 40 feet, and are thought to live almost 1000 years.[14] Other major vegetation includes the Parry saltbush and the Mojave sage, both only found in the Mojave, as well as the creosote bush.[17]

The current Mexican states that lie in Aridoamerica are:

The northern parts of:

The southern portions of the United States that lie within Aridoamerica are: