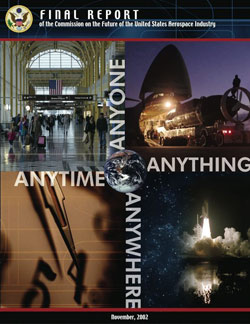 An excerpt from the introduction of the Interim Report #2 of the commission:[3]

The Commission on the Future of the United States Aerospace Industry was established by Section 1092 of the Floyd D. Spence National Defense Authorization Act for fiscal year 2001, Public Law 106-398. It was formed to study the future of the U.S. aerospace industry in the global economy, particularly in relationship to U.S. national security; and to assess the future importance of the domestic aerospace industry for the economic and national security of the United States.

The commission produced three interim reports and a final report.