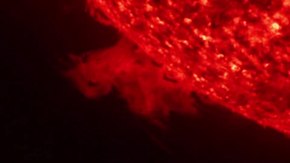 The detailed images recorded by SDO in 2011–2012 have helped scientists uncover new secrets about the Sun.

The Solar Dynamics Observatory (SDO) is a NASA mission which has been observing the Sun since 2010.[4] Launched on 11 February 2010, the observatory is part of the Living With a Star (LWS) program.[5]

The goal of the LWS program is to develop the scientific understanding necessary to effectively address those aspects of the connected Sun–Earth system directly affecting life and society. The goal of the SDO is to understand the influence of the Sun on the Earth and near-Earth space by studying the solar atmosphere on small scales of space and time and in many wavelengths simultaneously. SDO has been investigating how the Sun's magnetic field is generated and structured, how this stored magnetic energy is converted and released into the heliosphere and geospace in the form of solar wind, energetic particles, and variations in the solar irradiance.[6] 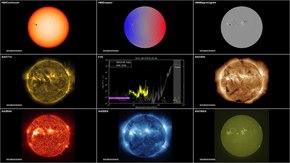 This visualization covers the same time span of 17 hours over the full wavelength range of the SDO.

The SDO spacecraft was developed at NASA's Goddard Space Flight Center in Greenbelt, Maryland, and launched on 11 February 2010, from Cape Canaveral Air Force Station (CCAFS). The primary mission lasted five years and three months, with expendables expected to last at least ten years.[7] Some consider SDO to be a follow-on mission to the Solar and Heliospheric Observatory (SOHO).[8]

SDO is a three-axis stabilized spacecraft, with two solar arrays, and two high-gain antennas, in an inclined geosynchronous orbit around Earth.

Data which is collected by the craft is made available as soon as possible, after it is received.[9]

Comparison of HMI Continuum images immediately after an eclipse, and then after the sensor has re-warmed.

The Helioseismic and Magnetic Imager (HMI), led from Stanford University in Stanford, California, studies solar variability and characterizes the Sun's interior and the various components of magnetic activity. HMI will take high-resolution measurements of the longitudinal and vector magnetic field over the entire visible solar disk[how?] thus extending the capabilities of SOHO's MDI instrument.[11]

HMI produces data to determine the interior sources and mechanisms of solar variability and how the physical processes inside the Sun are related to surface magnetic field and activity. It also produces data to enable estimates of the coronal magnetic field for studies of variability in the extended solar atmosphere. HMI observations will enable establishing the relationships between the internal dynamics and magnetic activity in order to understand solar variability and its effects.[12]

The Sun's output of energetic extreme ultraviolet photons is primarily what heats the Earth's upper atmosphere and creates the ionosphere. Solar EUV radiation output undergoes constant changes, both moment to moment and over the Sun's 11-year solar cycle, and these changes are important to understand because they have a significant impact on atmospheric heating, satellite drag, and communications system degradation, including disruption of the Global Positioning System.[14]

The EVE instrument package was built by the University of Colorado Boulder's Laboratory for Atmospheric and Space Physics (LASP), with Dr. Tom Woods as principal investigator,[7] and was delivered to NASA Goddard Space Flight Center on 7 September 2007.[15] The instrument provides improvements of up to 70% in spectral resolution measurements in the wavelengths below 30 nm, and a 30% improvement in "time cadence" by taking measurements every 10 seconds over a 100% duty cycle.[14]

The Atmospheric Imaging Assembly (AIA), led from the Lockheed Martin Solar and Astrophysics Laboratory (LMSAL), provides continuous full-disk observations of the solar chromosphere and corona in seven extreme ultraviolet (EUV) channels, spanning a temperature range from approximately 20,000 Kelvin to in excess of 20 million Kelvin. The 12-second cadence of the image stream with 4096 by 4096 pixel images at 0.6 arcsec/pixel provides unprecedented views of the various phenomena that occur within the evolving solar outer atmosphere.

The AIA science investigation is led by LMSAL, which also operates the instrument and – jointly with Stanford University – runs the Joint Science Operations Center from which all of the data are served to the worldwide scientific community, as well as the general public. LMSAL designed the overall instrumentation and led its development and integration. The four telescopes providing the individual light feeds for the instrument were designed and built at the Smithsonian Astrophysical Observatory (SAO).[16] Since beginning its operational phase on 1 May 2010, AIA has operated successfully with unprecedented EUV image quality.

Photographs of the Sun in these various regions of the spectrum can be seen at NASA's SDO Data website.[18] Images and movies of the Sun seen on any day of the mission, including within the last half-hour, can be found at The Sun Today.

SDO down-links science data (K-band) from its two onboard high-gain antennas, and telemetry (S-band) from its two onboard omnidirectional antennas. The ground station consists of two dedicated (redundant) 18-meter radio antennas in White Sands Missile Range, New Mexico, constructed specifically for SDO. Mission controllers operate the spacecraft remotely from the Mission Operations Center at NASA Goddard Space Flight Center. The combined data rate is about 130 Mbit/s (150 Mbit/s with overhead, or 300 Msymbols/s with rate 1/2 convolutional encoding), and the craft generates approximately 1.5 Terabytes of data per day (equivalent to downloading around 500,000 songs).[7]

After launch, the spacecraft was placed into an orbit around the Earth with an initial perigee of about 2,500 km (1,600 mi). SDO then underwent a series of orbit-raising maneuvers which adjusted its orbit until the spacecraft reached its planned circular, geosynchronous orbit at an altitude of 35,789 km (22,238 mi), at 102° West longitude, inclined at 28.5°.[23] This orbit was chosen to allow 24/7 communications to/from the fixed ground station, and to minimise solar eclipses to about an hour a day for only a few weeks a year.

Moments after launch, SDO's Atlas V rocket flew past a Sun dog hanging suspended in the blue Florida sky and when the rocket penetrated the cirrus cloud, shock waves rippled through the cloud and destroyed the alignment of the crystals of the Sun dog making a visible rippling effect in the sky.[24]

Camilla Corona is a rubber chicken (similar to a children's toy), and is the mission mascot for SDO. It is part of the Education and public outreach team and assists with various functions to help educate the public, mainly children, about the SDO mission, facts about the Sun and Space weather.[25] Camilla also assists in cross-informing the public about other NASA missions and space related projects. Camilla Corona SDO uses social media to interact with fans.

The United States Post office announced on 15 January 2021, that they would be releasing a series of stamps highlighting images of the Sun captured by NASA's Solar Dynamics Observatory.

NASA's images of the Sun's dynamic and dazzling beauty have captivated the attention of millions. In 2021, the U.S. Postal Service is showcasing the Sun's many faces with a series of Sun Science forever stamps that show images of solar activity captured by NASA's Solar Dynamics Observatory (SDO). "I have been a stamp collector all my life and I can't wait to see NASA science highlighted in this way", said Thomas Zurbuchen, associate administrator for NASA's Science Mission Directorate (SMD) in Washington, D.C. "I feel that the natural world around us is as beautiful as art, and it is inspiring to be able to share the import and excitement of studying the Sun with people around the country".[26]

The 20-stamp set features ten images that celebrate the science behind NASA's ongoing exploration of our nearest star. The images display common events on the Sun, such as solar flares, sunspots and coronal loops. SDO has kept a constant eye on the Sun for over a decade. Outfitted with equipment to capture images of the Sun in multiple wavelengths of visible, ultraviolet, and extreme ultraviolet light, SDO has gathered hundreds of millions of images during its tenure to help scientists learn about how our star works and how its constantly churning magnetic fields create the solar activity we see.[26]

That solar activity can drive space weather closer to Earth that can interfere with technology and radio communications in space. In addition to this immediate relevancy to our high-tech daily lives, the study of the Sun and its influence on the planets and space surrounding it – a field of research known as heliophysics – holds profound implications for the understanding of our Solar System and the thousands of solar systems that have been discovered beyond our own. As our closest star, the Sun is the only nearby star that humans are able to study in great detail, making it a vital source of data.[26]