The Complutense University of Madrid (Spanish: Universidad Complutense de Madrid; UCM, Universidad de Madrid, Universidad Central de Madrid; Latin: Universitas Complutensis Matritensis) is a public research university located in Madrid. Founded in Alcalá in 1293 (before relocating to Madrid in 1836), it is one of the oldest operating universities in the world. It is located on a sprawling campus that occupies the entirety of the Ciudad Universitaria district of Madrid, with annexes in the district of Somosaguas in the neighboring city of Pozuelo de Alarcón. It is named after the ancient Roman settlement of Complutum, now an archeological site in Alcalá de Henares, just east of Madrid.

It enrolls over 86,000 students, making it the third largest non-distance European university by enrollment.[2] It is one of the most prestigious Spanish universities and consistently ranks among the top universities in Spain, together with the University of Barcelona, Pompeu Fabra University, UAM, and UAB in International and European league tables and surveys.[3][4] Since its foundation, it has attracted numerous scholars, intellectuals and students from all over Spain and the world, establishing itself as one of the main international centers of learning.[5] By Royal Decree of 1857, the University of Madrid was the first and only institution in Spain authorized to grant doctorate degrees throughout the Spanish Empire. In 1909, the University of Madrid became one of the first universities in the world to grant a doctorate degree to a woman.[6] On 20 May 1293, King Sancho IV of Castile granted the Archbishop of Toledo, Gonzalo Pérez Gudiel, a royal charter to found a studium generale (as universities were known at that time), named El Estudio de Escuelas Generales in Alcalá de Henares.[7] One of its alumni, Cardinal Cisneros, made extensive purchases of land and ordered the construction of many buildings, in what became the first university campus ex-novo in history: The Civitas Dei, or city of God, named after the work of Augustine of Hippo. On 13 April 1499, Cardinal Cisneros secured from Pope Alexander VI a papal bull to expand Complutense into a full university. This papal bull conferred official recognition throughout Christendom to all degrees granted by the university. It also renamed the institution Universitas Complutensis, after Complutum, which was the Latin name of Alcalá de Henares, where the university was originally located.

In the 1509–1510 school year, the Complutense University already operated with five major schools: Arts and Philosophy, Theology, Canon Law, Philology and Medicine.[8][9] During the 16th and 17th centuries, Complutense University became one of the greatest centers of academic excellence in the world. Many of the leading figures in science, arts and politics of that age studied or taught in Complutense's classrooms.[10] Special colleges were created for students of foreign origin, such as Flemish or Irish.

In 1824, Francisco Tadeo Calomarde further expanded Complutense by merging it with the University of Sigüenza.[14] By a royal order of 29 October 1836, Queen Regent Maria Christina suppressed the university in Alcalá and ordered its move to Madrid, where it took the name of Literary University and, in 1851, of Central University of Madrid (Spanish: Universidad Central de Madrid). The university would be known under this name until its original name of "Complutense" was restored in the 1970s. The University of Madrid awarded Albert Einstein a Doctor of Science degree Honoris Causa on 28 February 1923; this was the first Doctor of Science degree Honoris Causa that Albert Einstein accepted from a European university. In April 1933 the Minister for Education and the Arts, Fernando de los Ríos, announced that Einstein had agreed to take charge of a professorship in a research institute, which would bear the name Instituto Albert Einstein, under the university's School of Science.[15] However, as the political situation began to deteriorate throughout Europe, Prof. Einstein ended up accepting a similar position at the Institute for Advanced Study in Princeton, New Jersey.

The university greatly expanded during the 19th century, and its accommodations in central Madrid proved to be increasingly inadequate. Besides the greater number of students, after its move from Alcalá the university had been based in a number of preexisting, government-acquired properties – mainly aristocratic mansions and royal châteaux from centuries past, abandoned by their owners for more contemporary lodgings. Though they were not without their charm, the ancient buildings were not ideal as educational settings, and the early 20th century witnessed the students of the Central University attending philosophy lectures and anatomy lessons in elaborate spaces that had served as ballrooms and salons only a few decades prior.

This situation changed in 1927, when by royal decree King Alfonso XIII ceded state-held lands in the proximity of the Palace of La Moncloa to establish space for the University of Madrid. At the time, this constituted all of the land between the Royal Palace and the Palace of El Pardo, and today it comprises a vast swath of western Madrid referred to as the "Ciudad Universitaria", or University City of Madrid.

Engineers graduated in 1913 from the Complutense University.

A council appointed by King Alfonso XIII had decided that the new University of Madrid would require the innovative architecture and planning. A team of academics was sent on an international expedition to visit the most prestigious universities in Europe and North America, to combine the best of both continents and design the utopian academic setting. The trip took them to 19 universities in the American northeast, as well as to Paris, Lyon, Oxford, Berlin, Hamburg, and numerous other European cities, all in an effort to discern the best possible building structure. The architectural tendencies of the era, however, ended up having a greater influence than the academics' visits to Harvard, the University of Pennsylvania, La Sorbonne or the University of Berlin; while the final plans from this period are hardly recognizable to anyone familiar with the contemporary campus, the buildings from the era that managed to survive the design revisions, the Civil War and the Franco regime betray the period's fondness for the German Bauhaus movement. Indeed, the original buildings, exemplary amongst them the Schools of Medicine, Pharmacy and Odontology, are an homage to structural functionalism and the graceful utilitarianism of the 1920s.

This section does not cite any sources. Please help improve this section by adding citations to reliable sources. Unsourced material may be challenged and removed. (May 2014) (Learn how and when to remove this template message) The University of Madrid has played a major role in the political development of Spain since its founding. Its graduates have been members, at either congressional or ministerial level, in all of the governments of Spain since the Enlightenment, and their positions in the Second Spanish Republic and the post-Franco transition to democracy were particularly notable. The former first deputy prime minister, María Teresa Fernández de la Vega, and the former president, José María Aznar, are both graduates of the university. The Complutense University has also played host to some of the most significant figures of the intellectual world, with a long tradition of visiting professors amongst which feature some of the greats of world academia (most notably, Albert Einstein). A significant part of the European intelligentsia flocked to its halls during the 1930s, when democratic Spain provided a refuge from the rising terrors of fascism. The contemporary Complutense University has also counted numerous Nobel Laureates not only among its graduates, but also its faculty members over the years.

Rectorate building of the Complutense University.

Currently, the Complutense University is the largest university in Spain. During the 2004–2005 academic year the university recorded an enrollment of 91,598 students and employed a staff of 9,500, of which over 6000 are directly involved in teaching duties; the university operates on government subsidies, grants and enrollment funds, with a current annual budget of over €500,000,000 . The university currently offers nearly 80 possible majors, 230 individual degrees, and 221 doctorate programs. The university has over 30 libraries, with over 2 million works in print, a particularly rich archive of over 90,000 historical documents, and one of the most extensive film collections in Europe.

Due to its long history in the capital, the Complutense University enjoys great support from Madrid-based institutions, at a local, national and international level. The School of Medicine operates the Hospital Clínico Universitario de San Carlos, Hospital Gregorio Marañón, and the most famous one, Hospital 12 October, as well as a number of other specialized clinics located on-campus, some of which are operated jointly with the Ministry of Health or perform specific research for the ministry. The School of Medicine is not the only one with government involvement; indeed, despite past conflicts, the Complutense University shares a close bond with the Spanish government, as both the presidential residence of La Moncloa and the Spanish Constitutional Court are located directly on-campus (with the political centre of the city at walking distance).

The School of Communications, meanwhile, enjoys equally good relations with the press (large part of its professors being former reporters, editors, or directors of major Spanish and international newspapers). Moreover, the school is known particularly for its role as one of the premiere pre-screening locales in Spain- all major Spanish film productions are screened first before an audience of Complutense students, with the main actors or production figures of the films attending a post-screening press conference. Most recently, Blanca Portillo, Carmen Maura, Lola Dueñas and Yohana Cobo pre-screened Pedro Almodóvar's Volver; past pre-screening visitors have included director Santiago Segura, actor Alejo Sauras, and writer E. Annie Proulx.

The Faculty of Fine Arts was created in 1978, and now offers first degrees in Fine Arts, Design, and Preservation and Restoration of Artistic Patrimony; as well as postgraduate magister's and doctorate degrees.[16]

Each year, the Madrid Círculo de Bellas Artes extends special invitations to the Complutense students during its series of annual conferences featuring prominent philosophers, sociologists, and psychologists. Likewise, all of the faculties have been able to benefit greatly by lectures given by some of the most illustrious figures in recent history, of all fields, from singer-songwriter and Catalan activist Joan Manuel Serrat to historian Ernst Gombrich, from writer Umberto Eco to communist politician Santiago Carrillo. Alejandro Amenábar wrote his first film, Tesis, while still attending the Complutense University. All the on-campus scenes in the film were shot in the School of Communications, which Amenábar himself had attended, and the building itself serves as major device in the plot.

Professor giving a lecture at the Complutense University.

The Complutense University publishes a bi-monthly newspaper, the Gaceta Complutense,[17] and also features a fully operational radio station, Radio Complutense (107.5 FM),[18][19] which broadcasts for 12 hours daily; both are run from the School of Communications.[20]

While the university has a select number of registered dormitories, these are located on the fringes of the campus within bordering neighborhoods, and therefore no students truly live on the campus proper. Due to the costs, and the fact that university-affiliated lodging is not required, the majority of the Complutense's students live independently, either in non-affiliated dormitories or in actual apartments.

The University of Madrid is home to over 100 student political, social and sports-related groups. Aerobics, gym, yoga, swimming, tennis, diving, tai-chi, and numerous other courses are offered. In terms of team sports, the Complutense features male and female basketball, football, and volleyball divisions, as well as rugby. Chess, badminton, golf, judo, karate, table-tennis, and archery teams are also available. Internal university games are held several times a year, with all of the different schools competing; the Complutense also participates in the regional university games, held each March at the Puerta del Hierro Stadium in Madrid, and selected national competitions. All students, professors, staff members, and family of staff members have the right to be evaluated and attended to at the Complutense University Center for Sport and Fitness Medicine.

Besides an extensive series of accords permitting student/professor exchanges and study abroad opportunity with prestigious universities throughout the world, the Complutense University of Madrid currently operates four full-time institutions outside of Spain.[21][22] 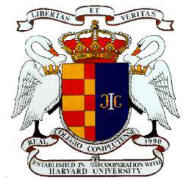 Coat of arms of the Real Colegio Complutense at Harvard University