Its establishment sanctioned by Pope Sixtus IV, the University of Copenhagen was founded by Christian I of Denmark as a Catholic teaching institution with a predominantly theological focus. In 1537, it was re-established by King Christian III as part of the Lutheran Reformation. Up until the 18th century, the university was primarily concerned with educating clergymen. Through various reforms in the 18th and 19th century, the University of Copenhagen was transformed into a modern, secular university, with science and the humanities replacing theology as the main subjects studied and taught.[9]

The University of Copenhagen consists of six different faculties, with teaching taking place in its four distinct campuses, all situated in Copenhagen.[10][11] The university operates 36 different departments and 122 separate research centres in Copenhagen, as well as a number of museums and botanical gardens in and outside the Danish capital.[12] The University of Copenhagen also owns and operates multiple research stations around Denmark, with two additional ones located in Greenland.[13][14] Additionally, The Faculty of Health and Medical Sciences and the public hospitals of the Capital and Zealand Region of Denmark constitute the conglomerate Copenhagen University Hospital.[15]

As of October 2022, 10 Nobel laureates[19] and 1 Turing Award laureate have been affiliated with the University of Copenhagen as students, alumni or faculty.[20] Alumni include one president of the United Nations General Assembly and at least 24 prime ministers of Denmark. The University of Copenhagen fosters entrepreneurship, and between 5 and 6 start-ups are founded by students, alumni or faculty members each week.[21]

The Round Tower (Rundetårn), used as an observatory by astronomer Ole Rømer.

The University of Copenhagen was dissolved in about 1531 as a result of the spread of Protestantism. It was re-established in 1537 by King Christian III after the Lutheran Reformation. The king charged Johannes Bugenhagen, who came from Wittenberg to Copenhagen to take up a chair of theology, with the drawing up of a new University Charter. The resulting Charter was issued in 1539.[24] Between 1675 and 1788, the university introduced the concept of degree examinations. An examination for theology was added in 1675, followed by law in 1736. By 1788, all faculties required an examination before they would issue a degree.

In 1807, the British Bombardment of Copenhagen destroyed most of the university's buildings.[25] By 1836, however, the new main building of the university was inaugurated amid extensive building that continued until the end of the century. The University Library (now a part of the Royal Library), the Zoological Museum, the Geological Museum, the Botanic Garden with greenhouses, and the Technical College were also established during this period.

Interior of the old university library at Fiolstræde around 1920.

The first female student was enrolled at the university in 1877. The university underwent explosive growth between 1960 and 1980. The number of students rose from around 6,000 in 1960 to about 26,000 in 1980, with a correspondingly large growth in the number of employees. Buildings built during this time period include the new Zoological Museum, the Hans Christian Ørsted and August Krogh Institutes, the campus centre on Amager Island, and the Panum Institute. Also in 1993, the law departments broke off from the Faculty of Social Sciences to form a separate Faculty of Law. In 1994, the University of Copenhagen designated environmental studies, north–south relations, and biotechnology as areas of special priority according to its new long-term plan. Starting in 1996 and continuing to the present, the university planned new buildings, including for the University of Copenhagen Faculty of Humanities at Amager (Ørestaden), along with a Biotechnology Centre. By 1999, the student population had grown to exceed 35,000, resulting in the university appointing additional professors and other personnel.

In 2003, the revised Danish university law removed faculty, staff and students from the university decision process, creating a top-down control structure that has been described as absolute monarchy, since leaders are granted extensive powers while being appointed exclusively by higher levels in the organization.[26]

In 2005, the Center for Health and Society (Center for Sundhed og Samfund – CSS) opened in central Copenhagen, housing the Faculty of Social Sciences and Institute of Public Health, which until then had been located in various places throughout the city. In May 2006, the university announced further plans to leave many of its old buildings in the inner city of Copenhagen, an area that has been home to the university for more than 500 years. The purpose of this has been to gather the university's many departments and faculties on three larger campuses in order to create a bigger, more concentrated and modern student environment with better teaching facilities, as well as to save money on rent and maintenance of the old buildings. The concentration of facilities on larger campuses also allows for more inter-disciplinary cooperation; for example, the Departments of Political Science and Sociology are now located in the same facilities at CSS and can pool resources more easily.

The university has four main campus areas that are located in the Capital Region (three in Copenhagen and one in Frederiksberg):[27]

Most university students stay in privately owned dormitories (kollegier in Danish) or apartments in Copenhagen. There are five dormitories that are partially administered by the university; however, only students who have passed at least two years of studies are considered for admission. These are normally referred to as the old dormitories, and they consist of: Regensen, Elers' Kollegium, Borchs Kollegium, Hassagers Kollegium, and Valkendorfs Kollegium. The University of Copenhagen also offers Carlsberg Foundation researcher apartments for a duration of 6 months to 3 years for visiting research and academic research staff who affiliated with research projects funded by the Carlsberg Foundation.

The university's oldest known seal dates from a 1531 letter, it depicts Saint Peter with a key and a book. In a circle around him is the text

The 1537 seal is very similar to the current seal, which was made in 2000 and is shown at the top of this page. The text is different and the crowned shield shows the coat of arms of Denmark (as has been the case since 1820, when the heraldic reference to Norway was removed). The text is 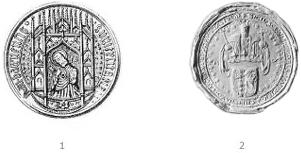 The 2021 CWTS Leiden Ranking ranks the University of Copenhagen as the best university in Denmark and best in Continental Europe, 4th in Europe (after Oxford, UCL and Cambridge) and 27th in the world.[41]

The international standing of University of Copenhagen has recently been questioned due to the lack of faculty governance since the change of the Danish academic system in the early 2000s. Tenure does not exist in Denmark,[citation needed] and the university managers have put the reputation at risk by e.g. the illegal dismissal[43] of the internationally prominent geoscientist, Hans Thybo.[44]

Cooperative agreements with other universities

The Department of Scandinavian Studies and Linguistics at University of Copenhagen signed a cooperation agreement with the Danish Royal School of Library and Information Science in 2009.[45][46]

The university hosts the annual Aging Research and Drug Discovery conference in cooperation with Columbia University.

The oldest surviving lecture plan from the university is from 1537.

Over the course of its history, a sizeable number of University of Copenhagen alumni have become notable in their fields, both academic, and in the wider world.[48] Wikimedia Commons has media related to University of Copenhagen.