It has been in continuous operation since its establishment in 1837 and is the oldest higher education institution of the modern Greek state and the first contemporary university in both the Balkan Peninsula and the Eastern Mediterranean.[4] Today it is one of the largest universities by enrollment in Europe, with over 69,000 registered students.[5]

The National and Kapodistrian University of Athens is an integral part of the modern Greek academic and intellectual tradition.

This section needs additional citations for verification. Please help improve this article by adding citations to reliable sources. Unsourced material may be challenged and removed.Find sources: "National and Kapodistrian University of Athens" – news · newspapers · books · scholar · JSTOR (April 2020) (Learn how and when to remove this template message) King Otto of Greece (Όθων) was the founder of the University of Athens.

The University of Athens was founded on 3 May 1837 by King Otto of Greece (in Greek, Óthon) and was named in his honour Othonian University (Οθώνειον Πανεπιστήμιον). It was the first university in the liberated Greek state and in the surrounding area of Southeast Europe as well. It was also the second academic institution after the Ionian Academy. This fledgling university consisted of four faculties; Theology, Law, Medicine and Arts (which included applied sciences and mathematics). During its first year of operation, the institution was staffed by 33 professors, while courses were attended by 52 students and 75 non-matriculated "auditors".[4]

It was first housed in the residence of architects Stamatios Kleanthis and Eduard Schaubert, on the north slope of the Acropolis, in Plaka, which now houses the museum of the university. In November 1841 the university relocated on the Central Building of the University of Athens, a building designed by Danish architect Christian Hansen. He followed a neoclassical approach, "combining the monument's magnificence with a human scale simplicity" and gave the building its H-shape.[6] The building was decorated by painter Carl Rahl, forming the famous "architectural trilogy of Athens", together with the building of the National Library of Greece (left of the university) and the building of the Athens Academy (right of the university). Construction began in 1839 in a location to the north of the Acropolis. Its front wing, also known as the Propylaea, was completed in 1842–1843. The rest of the wings' construction, that was supervised at first by Greek architect Lysandros Kaftantzoglou and later by his colleague Anastasios Theofilas, was completed in 1864. The building is nowadays part of what is called the "Athenian Neoclassical Trilogy".[6] 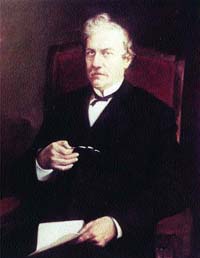 The historian and professor Konstantinos Paparrigopoulos, founder of the modern Greek historiography, was elected rector of the University of Athens in 1872.

The Othonian University was renamed to National University (Εθνικόν Πανεπιστήμιον) in 1862, following events that forced King Otto to leave the country.

Statue of the first Governor of Greece, Conte Ioannis Kapodistrias, whose name has been given to the university in 1932, after the unification of the Kapodistrias University (theoretical schools) and the National University (scientific schools).

Between 1895 and 1911, an average of 1,000 new students matriculated each year, a number which increased to 2,000 at the end of World War I. This resulted in the decision to introduce entrance examinations for all the faculties, beginning for the academic year 1927–28. Since 1954 the number of students admitted each year has been fixed by the Ministry of Education and Religion, by proposal of the faculties.

During the 1960s construction work began on the University Campus in the suburb of Ilissia, which houses the Schools of Philosophy, Theology and Sciences.[4]

The University of Athens is divided into schools, faculties and departments as follows. The naming is nοt consistent in English for historical reasons, but in Greek the largest divisions are generally named "σχολές" (schools) and are divided in "τμήματα" (departments), furthermore subdivided in "τομείς" (faculties).[11] The University of Athens also offers an English-taught 4-year undergraduate programme (with tuition) in Archaeology, History, and Literature of Ancient Greece.[13][14][15] In 2015, the external evaluation of the institution cited University of Athens as Worthy of merit.[1]

An external evaluation of all academic departments in Greek universities was conducted by the Hellenic Quality Assurance and Accreditation Agency (HQA) in 2010–14.[47][48]

The University of Athens is considered one of the leading universities of Greece, a leading European regional university and is present in the top universities annual lists. The most recent is the Webometrics Ranking of World Universities of 2019 that listed it in the 219th place out of 12,000 universities worldwide (1st in Greece, 70th in Europe) with very high perspectives regarding the university's openness.[51]

Furthermore, according to the QS World University Rankings annual list it is listed 651st–700th with very high research output.[53] The Shanghai Ranking (Academic Ranking of World Universities) ranked in 2018 the University 301st–400th globally.[54] In 2018 it was listed by the CWTS Leiden Ranking in the 232nd place globally with great publication output in the Biomedical and Health Sciences field.[55]

In 2019 the university was situated in the 73rd place worldwide in the Webometrics Ranking of World Universities by citations in Top Google Scholar Profiles.[56] The U.S. News & World Report Best Colleges Ranking (USNWR) lists it 279th in the world and 1st in Greece.[57] The Physics department building at the Ano Ilisia campus

The main campus is at Ano Ilisia, Zografou. There the faculties of Science, Theology and Philosophy are situated. The faculty of Life Sciences is located at Goudi and the faculty of Physical Education and Sports Science is located at Dafni. The faculties of Media, Education, Economics, Law and Public Administration are housed in various buildings near the centre of Athens, along with various administration facilities. University administration was housed initially in a historical neoclassical building near the center of Athens on Panepistimiou Street, but was relocated at the main university campus later.

Research conducted in the institutes of the metropolitan area of Athens accounted for more than 50% of the ISI-indexed scientific publications coming from Greece.[61][62][63] The Department of Informatics and Telecommunications has been ranked continuously among the 100 most important research institutes in the field of Computer Science, according to the Academic Ranking of World Universities (ARWU).[54]

The Centre of Continuing Education and Lifelong Learning (KEDIVIM; Greek: Κ.Ε.ΔΙ.ΒΙ.Μ. - Κέντρο Επιμόρφωσης και Δια Βίου Μάθησης) of the University of Athens (UoA) is a separate continuing and professional adult educational unit within University of Athens, at "non-typical education", although it is fully or partially regulated by the state and lead to officially recognised qualifications being considered non-formal education (NFE). It offers short-term courses[64][65][66][67] on-campus and by Distance e-Learning Mode off-campus mediated via real-time electronic means, certified by the EOPPEP - National Organization for the Certification of Qualifications and Vocational Guidance (Greek: Εθνικός Οργανισμός Πιστοποίησης Προσόντων και Επαγγελματικού Προσανατολισμού - Ε.Ο.Π.Π.Ε.Π.). In Greece, adult education, continuing education or lifelong learning is offered to students of all adult ages.

Throughout its history, a sizeable number of University of Athens alumni have become notable in many varied fields, both academic and otherwise. Moreover, two Nobel Prize-winners have studied or taught at Athens, with both their prizes being in Literature.

Political leaders who attended the University of Athens

The University of Athens has also been home to a large number of other politicians, such as Dora Bakoyannis, Kyriakos Mavronikolas, Georgios Alogoskoufis, Fofi Gennimata, and Dimitris Koutsoumpas.