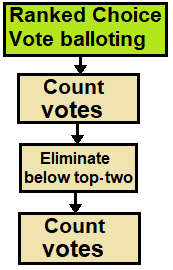 A flowchart for the contingent vote.

The contingent vote differs from IRV which allows for many rounds of counting, eliminating only one weakest candidate each round. IRV allows a small chance the candidate outside the top two can still win. The contingent vote can also be considered a compressed form of the two-round system (runoff system), in which both 'rounds' occur without the need for voters to go to the polls twice.

Today, a special variant of the contingent vote is used to elect the President of Sri Lanka. Another variant, called the supplementary vote, is used to pick directly elected mayors and police and crime commissioners in England. In the past the ordinary form of the contingent vote was used to elect the Legislative Assembly of Queensland from 1892 to 1942. To date, this has been the longest continuous use of the system anywhere in the world. It was also used in the US state of Alabama in the 1920s. Impact on factions and candidates

Like Instant runoff voting, the two round system, the goal of the contingent vote is to enable a majority of voters to confirm the winner of an election. The majority requirement encourages candidates to seek support beyond their core base of supporters in order to secure the lower preferences of the supporters of other candidates. This is said to create a more conciliatory campaigning style among candidates with similar policy platforms. However this effect will be diminished by the fact that lower preferences are less important under the contingent vote than under IRV; under the contingent vote it is especially important for candidates to receive many first preferences so that they are not eliminated straight away.

Compared to plurality voting, the contingent vote does aid the chances of 'third party' candidates to some extent, as voters do not need to be afraid a vote for a third party will spoil the election for a stronger party candidate, as long as their second preference candidate can make the top-two requirement.

The Supplementary Vote and Sri Lankan contingent vote are two implemented variations in which voters, differently from the ordinary form of the contingent vote, cannot rank all of the candidates, but rather are only permitted to express two and three ranks of preferences, respectively.

This means that if a voter does not use any of his or her preferences to support one of the candidates who survives to the second round, then it will be impossible to transfer that vote, which is therefore 'wasted' or 'exhausted'.

Under the two-round system (also known as runoff voting and the second ballot) voters vote for only a single candidate, rather than ranking candidates in order of preference. As under the contingent vote, if no candidate has an absolute majority in the first round, all but the top two are eliminated and there is a second round. However, in the two round system, voters are asked to return and vote a second time. Because of the similarities between them, the contingent vote and the two-round system can usually be expected to elect the same winner. However, in the two-round system, the voter is permitted to change one's mind from one round to another, even if the favourite candidate in the first round has not been eliminated.

The contingent vote will generally pick the same winner as a blanket primary, except fewer voters in the primary round may lead to a different top-two candidates than if the whole electorate voted in both rounds.

The top-four primary is a variant of the nonpartisan blanket primary which advances the top four candidates from a single primary, regardless of party, and uses Instant-runoff voting in the general election to pick a majority winner.