During butchering, beef is first divided into primal cuts, pieces of meat initially separated from the carcass. These are basic sections from which steaks and other subdivisions are cut. Since the animal's legs and neck muscles do the most work, they are the toughest; the meat becomes more tender as distance from hoof and horn increases. Different countries and cuisines have different cuts and names, and sometimes use the same name for a different cut; e.g., the cut described as "brisket" in the US is from a significantly different part of the carcass than British "brisket". "Cut" often refers narrowly to skeletal muscle (sometimes attached to bones), but can also include other edible flesh, such as offal (organ meat) or bones without significant muscles attached. 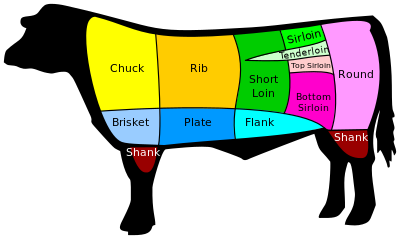 The following is a list of the American primal cuts, and cuts derived from them. Beef carcasses are split along the axis of symmetry into "halves", then across into front and back "quarters" (forequarters and hindquarters). Canada uses identical cut names (and numbering) as the U.S, with the exception of the "round" which is called the "hip".[1]

The most important cuts of beef in Argentine cuisine are:[3]

The most important cuts of beef in the Brazilian cuisine are:[4] 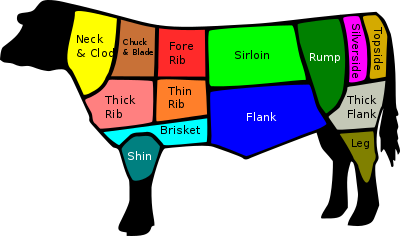 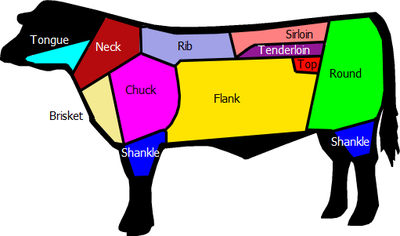 The cuts of beef in Finland are: This section is missing information about cut image. Please expand the section to include this information. Further details may exist on the talk page. (October 2020)