East Lothian (/ˈloʊðiən/; Scots: East Lowden; Scottish Gaelic: Lodainn an Ear) is one of the 32 council areas of Scotland, as well as a historic county, registration county and lieutenancy area. The county was also known as Haddingtonshire.

In 1975, the historic county was incorporated for local government purposes into Lothian Region as East Lothian District, with some slight alterations of its boundaries. The Local Government etc. (Scotland) Act 1994 later created East Lothian as one of 32 modern council areas. East Lothian lies south of the Firth of Forth in the eastern central Lowlands of Scotland. It borders Edinburgh to the west, Midlothian to the south-west and the Scottish Borders to the south. Its administrative centre and former county town is Haddington while the largest town is Musselburgh.

Haddingtonshire has ancient origins and is named in a charter of 1139 as Hadintunschira[1] and in another of 1141 as Hadintunshire.[2] Three of the county's towns were designated as royal burghs: Haddington, Dunbar, and North Berwick.

As with the rest of Lothian, it formed part of the Anglo-Saxon kingdom of Bernicia and later the Kingdom of Northumbria. Popular legend suggests that it was at a battle between the Picts and Angles in the East Lothian village of Athelstaneford in 823 that the flag of Scotland was conceived. From the 10th century, Lothian transferred from the Kingdom of England to the authority of the monarchs of Scotland. It was a cross-point in battles between England and Scotland and later the site of a significant Jacobite victory against Government forces in the Battle of Prestonpans. In the 19th century, the county is mentioned in the Gazetteer for Scotland as chiefly agricultural, with farming, fishing and coal-mining forming significant parts of the local economy.

Bernicia united into the Kingdom of Northumbria which itself became part of the early Kingdom of England. Lothian came under the control of the Scottish monarchy in the 10th century.

The earliest reference to Haddingtonshire as a county of Scotland occurred in the 12th century, in two charters issued by King David.

Haddingtonshire was heavily involved in several medieval and early modern conflicts and several fortified castles and buildings such as Dunbar Castle, Tantallon Castle and Dirleton Castle date from this period.

In the 12th and 13th centuries, the Palace of Haddington was one of the seats of the Kings of Scotland. King William the Lion of Scotland used the palace from time to time and it was the birthplace of Alexander II in 1198.[3] The palace and town were burned and pillaged in 1216, by an English army under the command of King John of England. In 1296, the Battle of Dunbar was a decisive victory for the forces of Edward I of England against the forces of John Balliol, the Scottish king who was Edward's vassal.

East Lothian was also the site of conflict during the war of the Rough Wooing, with many houses and villages burnt by the English in May 1544 after the sacking of Edinburgh, the Scottish defeat at the battle of Pinkie, Dunbar Castle burnt in 1548, and the siege of Haddington. East Lothian lairds supported the English cause, including John Cockburn of Ormiston, Alexander Crichton of Brunstane, and Regent Arran demolished their houses.

Following the Restoration of the monarchy, Glorious Revolution and Acts of Union, Jacobite forces conflicted with Government forces, with the main conflict taking place as part of the 1715 Rising and 1745 Rising. Under the command of Sir John Cope, the British Army met with the Jacobites under Charles Edward Stuart at the Battle of Prestonpans in the west of the county in September 1745, with the Jacobite side gaining a significant victory before being defeated at the Battle of Culloden in April 1746.

The local government saw major reforms in Scotland by the Local Government (Scotland) Act 1889, which gave Haddingtonshire a county council, replacing earlier functions of the Commissioners of Supply and local Justices of the Peace. East Lothian County Council was based at County Buildings in Court Street, Haddington.[4]

In 1975 under the Local Government (Scotland) Act 1973, Scotland's county councils were dissolved and a new system of regional and district councils was created. East Lothian District was created within the wider Lothian region. The district comprised the historic county of East Lothian plus the burgh of Musselburgh and the parish of Inveresk (which included Wallyford and Whitecraig) from the county of Midlothian.

When further reforms in 1996 moved Scotland to a system of 32 unitary local authorities, the modern council area of East Lothian was created.

East Lothian is predominantly rural. It has 40 miles (64 km) of coastline where the towns of Musselburgh, Prestonpans, Cockenzie and Port Seton, Gullane, North Berwick and Dunbar lie along the coast of the Firth of Forth. The coast has several headlands and bays, most notably Gosford Bay, Aberlady Bay, Gullane Point, Sandy Hirst, Tyne Mouth, Belhaven Bay, Barns Ness, Chapel Point and Torness Point. There are several small islands off the coast north of North Berwick, the largest of these being Fidra, Lamb, Craigleith and Bass Rock.

Only two towns are landlocked, Tranent and Haddington. To the south are the Lammermuir Hills along the boundary with Berwickshire; it is here that Meikle Says Law, the highest point in the county at 535 metres (1,755 ft), can be found. The River Tyne flows through Haddington and several of East Lothian's villages, reaching the Firth of Forth near Belhaven. The River Esk flows through Inveresk and Musselburgh where it empties at the north of the town into the Firth of Forth. Major bodies of water include Pressmennan Lake, the Whiteadder Reservoir, Hopes Reservoir, Stobshiel Reservoir and Lammerloch Reservoir.

The A1 road travels through East Lothian where it meets the Scottish Borders southbound and Edinburgh northbound. The A1 throughout East Lothian is dual carriageway and major junctions include Dunbar, Haddington, Tranent, Prestonpans and Musselburgh.[5]

Starting in Leith, the A199 road also travels through East Lothian beginning at Musselburgh and passing through Wallyford, Tranent, Macmerry and Haddington before joining the A1 in West Barns.[6]

Dunbar railway station, before a bridge was built over the tracks and a platform on the other side.

East Lothian is served by seven railway stations: Dunbar and Musselburgh on the East Coast Main Line; and North Berwick, Drem, Longniddry, Prestonpans and Wallyford on the North Berwick Line. Rail service operators which travel through and stop at stations in the area include: ScotRail on both lines; and CrossCountry and London North Eastern Railway on the East Coast Main Line.

Bus operators in East Lothian are: Lothian Buses and its subsidiary East Coast Buses, Eve Coaches of Dunbar, Prentice of Haddington and Borders Buses. East Coast Buses is the main bus service provider connecting the towns and villages of East Lothian to Edinburgh. The company has depots in North Berwick and Musselburgh.[8]

Population by major ethnic group in East Lothian according to the 2011 Scottish Census is as follows:

In the 2014 Scottish independence referendum, a majority of voters in the East Lothian council area opted for Scotland to remain a part of the United Kingdom - with 61.72% casting their ballots for the Union and 38.28% voting for independence.[10]

Parliament of the United Kingdom

East Lothian is a constituency in the House of Commons, electing one Member of Parliament. It is one of only 4 UK Parliamentary Constituencies in Scotland which matches the boundaries of its Local Authority area. The other examples being Inverclyde, Moray, and Na h-Eileanan an Iar, East Lothian is one of the few UK Parliamentary Constituencies which fully covers the boundaries of its Council area.

The current MP for East Lothian is Kenny MacAskill of the Alba Party, who has represented the constituency since the 2019 general election when he was elected for the SNP.

Former UK Prime Minister Arthur Balfour was born on 25 July 1848 at Whittingehame House in what is now the East Lothian constituency.

Haddington, with the Town House

Most of East Lothian is in the East Lothian Scottish Parliament constituency and South Scotland region with the exception of Musselburgh which is in Midlothian North and Musselburgh and the Lothians region.

East Lothian Council is based in the historic county town of Haddington, with the council meeting at the Haddington Town House and offices at nearby at John Muir House.[13] The unitary local authority contains six wards, electing 22 councillors. 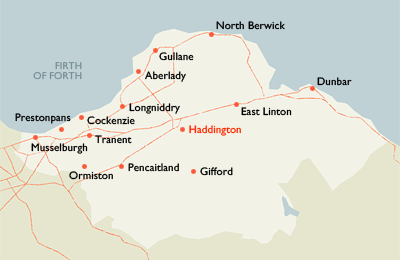 In 1894, John Martine published Reminiscences and Notices of Ten Parishes of the County of Haddington.[15]

There are two independent schools in the county. Loretto School is a day and boarding school in Musselburgh founded in 1827 and Belhaven Hill School, established in 1923 is a smaller preparatory school in Dunbar also providing boarding.

In 2007, Queen Margaret University began its move to a new, purpose-built campus in Musselburgh within East Lothian, providing it with its first university.

The County Flag of East Lothian

In November 2017, a county flag competition was launched in East Lothian to register an official flag of East Lothian. Anyone willing to enter this competition was allowed to enter, which resulted in 623 entries to the competition. The end of the entry submission time was the 28th of February 2018. Four final flag designs will be placed in a vote to the residents of East Lothian. In December 2018 the winning design was announced, designed by Archie Martin, a local man from Musselburgh and residing in Gifford who had worked for the council for 23 years. Martin died in July 2018. The flag features a saltire representing East Lothian as the birthplace of Scotland's flag. A gold cross signifies the wealth of East Lothian's farmlands and reputation as the granary of Scotland with a lion in the centre representing the Haddington lion along with blue stripes to represent the rivers Esk and Tyne.

The East Lothian Courier (often locally "The Courier") began as the Haddingtonshire Courier in 1859, before changing its name in 1971.[17] It was owned by D&J Croal, based in Haddington, until its purchase by the Dunfermline Press Group in 2004.

There are two local community radio stations in East Lothian, broadcasting on FM and online. East Coast FM, based in Haddington, has been broadcasting since 2009. Radio Saltire, formerly East Lothian FM, is now based in Tranent.

Notable people (by date of death)

A number of sports personalities also have links with East Lothian:

Freedom of the County

The following people and military units have received the Freedom of the County of East Lothian.