A panorama from a trail within the forest

Most of the forest (72.8%) lies in El Dorado County. In descending order of land area the others counties are: Amador, Alpine, and Placer counties in California; and Douglas County in Nevada with 78 acres (320,000 m2).[1] The forest is bordered on the north by the Tahoe National Forest, on the east by the Lake Tahoe Basin Management Unit, on the southeast by the Humboldt–Toiyabe National Forest, and to the south by the Stanislaus National Forest.

The forest ranges in elevation from 1,000 feet (300 m) in the foothills to more than 10,000 feet (3,000 m) above sea level along the Sierra crest. The mountainous topography is broken by the steep canyons of the Mokelumne, Cosumnes, American, and Rubicon rivers. Plateaus of generally moderate relief are located between these steep canyons. 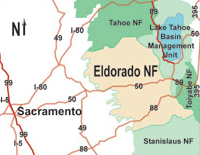 A cool montane version of Mediterranean climate extends over most of the forest, with warm, dry summers and cold, wet winters.

A wide variety of hardwoods, conifers, shrubs, native grasses, and forbs are represented in the various Eldorado National Forest ecosystems.

Old-growth forests totaling 122,000 acres (49,000 ha) have been identified in the Eldorado National Forest, consisting of:[3]

The forest was established on July 28, 1910, from a portion of Tahoe National Forest and other lands.[4]