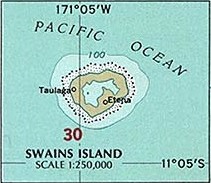 Etena is located on the south side of Swains Island about 0.75 miles east of the atoll's sole village and harbor, Taulaga.[1] It was constructed during the 19th century as the location for the "residency" of the island's European owners and "proprietors," the Jennings family. A four-bedroom, colonial-style residence was constructed there and occupied by family members for several years, but has since been abandoned and is now in a state of disrepair and largely overgrown by island vegetation.[2] A nearby graveyard contains the remains of several early island residents.

Etena is currently deserted,[3] with all of Swains Islands's residents living in the main village and sole harbor, Taulaga.[4]