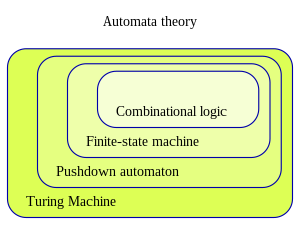 The behavior of state machines can be observed in many devices in modern society that perform a predetermined sequence of actions depending on a sequence of events with which they are presented. Simple examples are: vending machines, which dispense products when the proper combination of coins is deposited; elevators, whose sequence of stops is determined by the floors requested by riders; traffic lights, which change sequence when cars are waiting; combination locks, which require the input of a sequence of numbers in the proper order.

State diagram for a turnstile

An example of a simple mechanism that can be modeled by a state machine is a turnstile.[4][5] A turnstile, used to control access to subways and amusement park rides, is a gate with three rotating arms at waist height, one across the entryway. Initially the arms are locked, blocking the entry, preventing patrons from passing through. Depositing a coin or token in a slot on the turnstile unlocks the arms, allowing a single customer to push through. After the customer passes through, the arms are locked again until another coin is inserted.

Considered as a state machine, the turnstile has two possible states: Locked and Unlocked.[4] There are two possible inputs that affect its state: putting a coin in the slot (coin) and pushing the arm (push). In the locked state, pushing on the arm has no effect; no matter how many times the input push is given, it stays in the locked state. Putting a coin in – that is, giving the machine a coin input – shifts the state from Locked to Unlocked. In the unlocked state, putting additional coins in has no effect; that is, giving additional coin inputs does not change the state. However, a customer pushing through the arms, giving a push input, shifts the state back to Locked.

The turnstile state machine can be represented by a state-transition table, showing for each possible state, the transitions between them (based upon the inputs given to the machine) and the outputs resulting from each input:

The turnstile state machine can also be represented by a directed graph called a state diagram (above). Each state is represented by a node (circle). Edges (arrows) show the transitions from one state to another. Each arrow is labeled with the input that triggers that transition. An input that doesn't cause a change of state (such as a coin input in the Unlocked state) is represented by a circular arrow returning to the original state. The arrow into the Locked node from the black dot indicates it is the initial state.

In some finite-state machine representations, it is also possible to associate actions with a state: Several state-transition table types are used. The most common representation is shown below: the combination of current state (e.g. B) and input (e.g. Y) shows the next state (e.g. C). The complete action's information is not directly described in the table and can only be added using footnotes.[further explanation needed] An FSM definition including the full action's information is possible using state tables (see also virtual finite-state machine).

The Specification and Description Language is a standard from ITU that includes graphical symbols to describe actions in the transition:

There are a large number of variants to represent an FSM such as the one in figure 3.

Finite-state machines can be subdivided into acceptors, classifiers, transducers and sequencers.[6]

Fig. 5: Representation of an acceptor; this example shows one that determines whether a binary number has an even number of 0s, where S1 is an accepting state and S2 is a non accepting state.

The problem of determining the language accepted by a given acceptor is an instance of the algebraic path problem—itself a generalization of the shortest path problem to graphs with edges weighted by the elements of an (arbitrary) semiring.[8][9][jargon]

An example of an accepting state appears in Fig. 5: a deterministic finite automaton (DFA) that detects whether the binary input string contains an even number of 0s.

S1 (which is also the start state) indicates the state at which an even number of 0s has been input. S1 is therefore an accepting state. This acceptor will finish in an accept state, if the binary string contains an even number of 0s (including any binary string containing no 0s). Examples of strings accepted by this acceptor are ε (the empty string), 1, 11, 11..., 00, 010, 1010, 10110, etc.

Classifiers are a generalization of acceptors that produce n-ary output where n is strictly greater than two.[10] Transducers produce output based on a given input and/or a state using actions. They are used for control applications and in the field of computational linguistics.

Moore machine
The FSM uses only entry actions, i.e., output depends only on state. The advantage of the Moore model is a simplification of the behaviour. Consider an elevator door. The state machine recognizes two commands: "command_open" and "command_close", which trigger state changes. The entry action (E:) in state "Opening" starts a motor opening the door, the entry action in state "Closing" starts a motor in the other direction closing the door. States "Opened" and "Closed" stop the motor when fully opened or closed. They signal to the outside world (e.g., to other state machines) the situation: "door is open" or "door is closed".

Mealy machine
The FSM also uses input actions, i.e., output depends on input and state. The use of a Mealy FSM leads often to a reduction of the number of states. The example in figure 7 shows a Mealy FSM implementing the same behaviour as in the Moore example (the behaviour depends on the implemented FSM execution model and will work, e.g., for virtual FSM but not for event-driven FSM). There are two input actions (I:): "start motor to close the door if command_close arrives" and "start motor in the other direction to open the door if command_open arrives". The "opening" and "closing" intermediate states are not shown.

Sequencers (also called generators) are a subclass of acceptors and transducers that have a single-letter input alphabet. They produce only one sequence, which can be seen as an output sequence of acceptor or transducer outputs.[6]

There are other sets of semantics available to represent state machines. For example, there are tools for modeling and designing logic for embedded controllers.[12] They combine hierarchical state machines (which usually have more than one current state), flow graphs, and truth tables into one language, resulting in a different formalism and set of semantics.[13] These charts, like Harel's original state machines,[14] support hierarchically nested states, orthogonal regions, state actions, and transition actions.[15]

In accordance with the general classification, the following formal definitions are found.

to be a partial function, i.e.

does not have to be defined for every combination of

is in a state

, the next symbol is

is not defined, then

can announce an error (i.e. reject the input). This is useful in definitions of general state machines, but less useful when transforming the machine. Some algorithms in their default form may require total functions.

A finite-state transducer is a sextuple

If the output function depends on the state and input symbol (

) that definition corresponds to the Mealy model, and can be modelled as a Mealy machine. If the output function depends only on the state (

) that definition corresponds to the Moore model, and can be modelled as a Moore machine. A finite-state machine with no output function at all is known as a semiautomaton or transition system.

If we disregard the first output symbol of a Moore machine,

, then it can be readily converted to an output-equivalent Mealy machine by setting the output function of every Mealy transition (i.e. labeling every edge) with the output symbol given of the destination Moore state. The converse transformation is less straightforward because a Mealy machine state may have different output labels on its incoming transitions (edges). Every such state needs to be split in multiple Moore machine states, one for every incident output symbol.[17]

Optimizing an FSM means finding a machine with the minimum number of states that performs the same function. The fastest known algorithm doing this is the Hopcroft minimization algorithm.[18][19] Other techniques include using an implication table, or the Moore reduction procedure.[20] Additionally, acyclic FSAs can be minimized in linear time.[21]

Fig. 9 The circuit diagram for a 4-bit TTL counter, a type of state machine

In a digital circuit, an FSM may be built using a programmable logic device, a programmable logic controller, logic gates and flip flops or relays. More specifically, a hardware implementation requires a register to store state variables, a block of combinational logic that determines the state transition, and a second block of combinational logic that determines the output of an FSM. One of the classic hardware implementations is the Richards controller.

In a Medvedev machine, the output is directly connected to the state flip-flops minimizing the time delay between flip-flops and output.[22][23]

Through state encoding for low power state machines may be optimized to minimize power consumption.

The following concepts are commonly used to build software applications with finite-state machines:

"We may think of a Markov chain as a process that moves successively through a set of states s1, s2, …, sr. … if it is in state si it moves on to the next stop to state sj with probability pij. These probabilities can be exhibited in the form of a transition matrix" (Kemeny (1959), p. 384)