A few ruled states informally called empires, including ruler raja Sri Gupta, founder of the ancient Indian Gupta Empire, and Chandragupta Maurya.[2] 'Title inflation' soon led to most being rather mediocre or even petty in real power, which led to compound titles (among other efforts) being used in an attempt to distinguish some among their ranks. Maharani Rudrama Devi was one the few ruling queens in Indian History. She ruled for 26 years (1263–1289) and build the Warangal fort, several major temples, dharmashalas and civic services for the poor

The female equivalent, Maharani (or Maharanee, Mahārājñī, Maharajin), denotes either the wife of a Maharaja (or Maharana etc.) or also, in states where it was customary, a woman ruling without a husband. The widow of a Maharaja is known as a Rajmata, "queen mother".[3] Maharajakumar generally denotes a son of a Maharaja, but more specific titulatures are often used at each court, including Yuvaraja for the heir (the crown prince). The form "Maharaj" (without "-a") indicates a separation of noble and religious offices, although since in Hindi the suffix -a is silent, the two titles are near homophones. The word Maharaja originates in Sanskrit and is a compound karmadhāraya term from mahānt- "great" and rājan "ruler, king"). It has the Latin cognates magnum "great" and rex "king".[4][5] Due to Sanskrit's major influence on the vocabulary of most languages in Greater India and Southeast Asia, the term Maharaja is common to many modern Indo-Aryan and Dravidian languages. The Sanskrit title Maharaja was originally used only for rulers who ruled a considerably large region with minor tributary rulers under them. Since medieval times, the title was used by (Hindu) monarchs of lesser states claiming descent from ancient Maharajas.

Maharaja as a ruler's title

On the eve of independence in 1947, British India contained more than 600 princely states, each with its own native ruler, often styled Raja or Rana or Thakur (if the ruler were Hindu) or Nawab (if he were Muslim), with a host of less current titles as well.

The British directly ruled two-thirds of the Indian subcontinent; the rest was under indirect rule by the above-mentioned princes under the considerable influence of British representatives, such as Residents, at their courts.

The word Maharaja may be understood simply to mean "ruler" or "king", in spite of its literal translation as "great king". This was because only a handful of the states were truly powerful and wealthy enough for their rulers to be considered 'great' monarchs; the remaining were minor princely states, sometimes little more than towns or groups of villages. The word, however, can also mean emperor in contemporary Indian usage.

The title of Maharaja was not as common before the gradual British colonisation of India, upon and after which many Rajas and otherwise styled Hindu rulers were elevated to Maharajas, regardless that scores of these new Maharajas ruled small states, sometimes for some reason unrelated to the eminence of the state, for example, support to the British in Afghanistan, World War I or World War II. The Maharaja of Punjab in the 19th century was Maharaja Ranjit Singh. He earned this title by keeping the Britishers beyond the Sutlej and even crushed the Afghan Empire. Maharajas in the twentieth century were the Maharaja of Cochin and Maharaja Jagatjit Singh of Kapurthala. Apart from princely states, rulers of some large and extended zamindaris were also awarded the title of Maharaja. The rulers of Jeypore, Darbhanga, Vizianagaram, Parlakhemundi were a few zamindars who were titled Maharaja for their cordiality and contribution to the British Raj.

In the Mughal Empire it was quite common to award to various princes (hereditary or not) a series of lofty titles as a matter of protocolary rank. The British would, as paramount power do the same. Many of these (see also above) elaborate explicitly on the title Maharaja, in the following descending order: Chhatrapati Shivaji Raje Bhosale. The Maratha king preferred the title of Chhatrapati as against Maharaja and was the founder and sovereign of the Maratha Empire of India 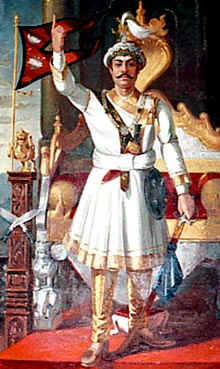 Furthermore, there were various compound titles simply including other princely styles, such as:

Certain Hindu dynasties even came to use a unique style, including a term which as such is not of princely rank, e.g. Maharaja Gaikwar of Baroda, Maharaja Scindia of Gwalior, Maharaja Holkar of Indore, three of the very highest ranking ruling Maratha houses.

At the absence of the king (maharaja), minor heir, less experienced Queen (Maharani); the mother of the king takes charge of the kingdom and acts as an temporary monarch/regent. Until the heir comes to the age or the Queen is ready, the Rajmata (Queen mother) administers the kingdom. She is empowered to issue royal decree (Rajyaadesh/rajya shasan) and she will be the head of the military. Famous examples include Rajmata Shetu Lakshmi Bayi of Travincore dynasty, Gowri lakshmi bayi, Maharaji (later Rajmata) Rudrama devi of Kakatiya dynasty.[6][7] The Rajmata can overrule the advise of ministerial council, abolish or impose tax, appoint or dismiss people from a post and has unlimited powers at the absence of the king. When the king is present, the Rajmata being the mother of the king, are given with certain powers to roles. They often share the burden of the ruling king/queen. Few of the powers they are granted (not limited) with are "powers to summon the king, appoint certain people, issue police orders, religious duties, issue death warrant and other minor powers". Famous Rajmata who functioned with the king is Rajmata Jijabai of vast Maratha empire, accompanying the chakravarti (emperor).[8]

Chakravarti is a Sanskrit term for "emperor". The meaning of chakravatri is "he, whose wheels of chariot is moving" which symbolizes that the leader who is a war hero, who commands over vast land and sea, the one who rules the people with dedication. In the Mahabharata, the Chakravarti Bharat is known to have ruled the entire sub-continent of India brought golden age to his kingdom. He is called as chakravarti.

Yuvaraja means the crown prince of the kingdom. He is granted with certain powers and responsibilities so that he can be prepared to take over as the Maharaja.

Yuvarani is the royal title given to the wife of a crown prince. A yuvarani is trained in religious, administrative and judiciary sections but is also trained to command armies in the absence of the King.

Rajakumara is a prince who is not going to be the next Maharaja. He is created as royal blood and based on the confort of the King/queen, he is conferred with certain duties.

Rajakumari is a princess who will not be the next queen . Daughter of King

Nobiliary and honorary use

Like Raja and various other titles, Maharaja was repeatedly awarded to notables without a princely state, such as zamindars.

Derived style for princes of the blood 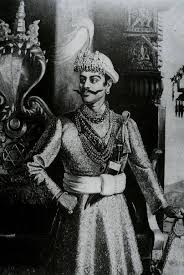 When the Indonesian archipelago was still predominantly Hindu-Buddhist (circa 3rd century CE until the 15th century CE), all of the Indianized kingdoms which ruled different areas of the archipelago was ruled by a "Maharaja" or simply referred by the locals as "Raja", such as the first and oldest Hindu kingdom of Indonesia the Kutai Martadipura in eastern Borneo, the Tarumanegara, the Srivijaya, the Majapahit and numerous other kingdoms. Traditional titles remain in use for other members of royalty, such as Pangeran Ratu for the heir and other local-Malay titles such as "Paduka Sri". The title "Maharaja" has been used to refer to kings of ancient Indianized kingdoms, such as Maharaja Mulavarman king of Kutai Martadipura and Maharaja Purnawarman king of Tarumanegara.

Maharaja was also part of the titles of the nobility in the Sumatran sultanate of Aceh. In the past, the title of Maharaja is given to a leader of the unreigning noble family and the Prime Minister Maharaja Mangkubumi. The last Prime Minister of Aceh who was installed to be the Maharaja Mangkubumi, Habib Abdurrahman el Zahir, who also acted as the foreign affairs minister of Aceh but was deposed and exiled to Jeddah by the colonial Dutch East Indies authorities in October 1878.

In northern Borneo, the title Maharajah of Sabah and Rajah of Gaya and Sandakan was used from 29 December 1877 to 26 August 1881 by Baron von Overbeck (compare White Rajah).[9]

In Seri Malayas of the Srivijaya, under the Srivijaya satellite empire of the Majapahit Empire dominated over the whole Malayas far-reaching the present Philippine Archipelago, Malaysia, Brunei, Indonesia under the Srivijaya Empire of the Majapahit King Maharaja Pamariwasa. The latter's daughter Es-kander was married to an Arab (Zein Ul-Abidin), the third Makdum who promulgated Koranic studies (Madrassahs) and was a Srivijaya ruler in Seri who were a Srivijaya Monarchy. In the 12th century with the fall of the empire, the Seri King being a Muslim established the Sultanate of Brunei in 1363 with the throne name Sultan Mohamad Shah. In 1426, he established the sultanate of sulu as his death was recorded in 1431 Mt. Makatangis Sulu grave and 1432 Brunei grave. Both Sulu and Brunei claim the honor of his grave, while his brother, a Johore (Singapore) Prince Makdum Karim (Sharif Kabungsuwan of Malabang Lanao) the second Makdum after the first one Makdum Tuan Masha'ik. Karim ul-makdum re=enforced Islam, a Srivijaya Johore ruler, later established the Sultanate of Maguindanao-Ranao (Mindanao) after taking the political authority of his father-in-law Tomaoi Aliwya of the Maguiindanao family dynasty. He adapted the title as sultan Aliwya (Sharif Kabungsuwan), the first Maguindanao Sultan. The second and third Makdum's father was Sultan Betatar of Taif Arabia who was the 9th progeny of Hasan, the grandson of prophet Sayyidina Muhammad.

The word can also be part of titles used by Malay nobility:

Eventually, Maharajah Adinda was also used to refer to a particular lineage within the royal families. The King of Thailand has been called a "Maharaj" (Thai: มหาราชา).