Mariss Ivars Georgs Jansons (14 January 1943 – 1 December 2019[a]) was a Latvian conductor best known for his interpretations of Mahler, Strauss and Russian composers such as Tchaikovsky, Rachmaninoff and Shostakovich.[7] During his lifetime he was often cited as among the world's leading conductors;[7][8][9][10] in a 2015 Bachtrack poll, he was ranked by music critics as the world's third best living conductor.[11] Jansons was long associated with the Bavarian Radio Symphony Orchestra (BRSO; 2003–2019) and Royal Concertgebouw Orchestra (ROC; 2004–2015) as music director.

Born in Riga, Latvia, Jansons moved to Leningrad (now Saint Petersburg) in 1956, where he studied conducting, and he received further training in Austria. He first achieved prominence with the Oslo Philharmonic, where he served as music director from 1979 to 2000. Besides the BRSO and ROC, he also directed the Pittsburgh Symphony Orchestra from 1997 to 2004; he was a frequent guest conductor with the London Philharmonic Orchestra and London Symphony Orchestra. Jansons recorded prolifically, and was the recipient of numerous awards.

Jansons was born in Riga, Latvia—then under German occupation during the Second World War—to Iraida Jansons, the diva of the Riga Opera, and Arvīds Jansons, conductor of the opera orchestra.[12] Iraida, who was Jewish, gave birth to her son in hiding after being smuggled out of the Riga Ghetto, where her father and brother were murdered by the Nazis. As a child, Jansons first studied violin with his father.[13]

In 1956, Arvīds was appointed assistant conductor to Yevgeny Mravinsky at the Leningrad Philharmonic. Jansons joined his father in Leningrad, where he began to study conducting, and soon entered the Leningrad Conservatory.[12] In 1968, Herbert von Karajan visited the Soviet Union, and he singled out Jansons and Dmitri Kitayenko from a group of young conductors. Karajan offered Jansons the opportunity to study with him in Berlin, but the Soviet authorities blocked the offer.[12] In 1969, Jansons continued his training with Hans Swarowsky in Vienna, and then in Salzburg with Karajan.[12] In 1971, Jansons won the second prize at the "Herbert von Karajan" International Conducting Competition.[7][14] Karajan invited Jansons to be his assistant with the Berlin Philharmonic, but the Soviet authorities blocked Jansons from ever hearing about the offer.[12] 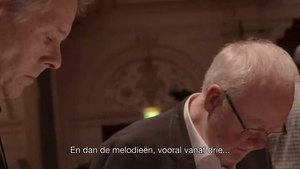 Scene from the documentary Imperfect Harmony, with Mariss Jansons and Louis Andriessen preparing a new composition by the latter with the Royal Concertgebouw Orchestra

In 1992, Jansons was named Principal Guest Conductor of the London Philharmonic Orchestra. He worked as a guest conductor with the London Symphony Orchestra and recorded Mahler's Symphony No. 6 with them for the LSO Live label.[16][17]

In 1997, Jansons became the Music Director of the Pittsburgh Symphony Orchestra. His initial contract was for three years, but his subsequent contract renewals were evergreen contracts that required yearly renewal. In June 2002, he announced his departure from the orchestra in 2004.[18]

In April 1996, Jansons nearly died from a severe heart attack while conducting the final pages of La bohème in Oslo.[19] He recuperated in Switzerland. Later, surgeons in Pittsburgh fitted an implanted defibrillator in his chest to give his heart an electric jolt if it failed.[20] (Jansons's father had died at a 1984 concert, conducting the Hallé Orchestra.[21]) Jansons stated that he suffered from jet lag, and this was one reason that he left his American position.[22]

In October 2002, Jansons was named the sixth Chief Conductor of the Royal Concertgebouw Orchestra (RCO) of Amsterdam, effective 1 September 2004, succeeding Riccardo Chailly.[14][33] His initial Amsterdam contract was for three years,[34] and his commitment in Amsterdam was for twelve weeks per season. In April 2014, the orchestra announced that Jansons was to stand down as chief conductor after the 2014–2015 season.[35][36] He conducted his final concert as chief conductor of the RCO on 20 March 2015, in the presence of King Willem-Alexander and Queen Maxima.[37] He subsequently held the title of conductor emeritus of the KCO until his death.[2]

In 2006, Jansons conducted the Vienna Philharmonic New Year's Concert for the first time. Also in January 2006, he was awarded MIDEM's Artist of the Year Award in Cannes. In October 2007, Jansons (who was Lutheran[38]) conducted Beethoven's Ninth Symphony with the Bavarian Radio Symphony Orchestra for Pope Benedict XVI and 7,000 other listeners in the papal audience hall (Auditorio Paul VI). Jansons conducted the Vienna New Year's Concert for the second time in 2012, and for the third and final time in 2016.

Jansons was married twice. He and his first wife, Ira, had a daughter, Ilona, who became a pianist at the Mariinsky Theatre. The marriage ended during his tenure in Oslo. Jansons and his second wife Irina (née Outchitel),[7] a former speech therapist, had a home in Saint Petersburg, where Jansons kept his collection of scores.[39] He held both Latvian and Russian citizenship.[20]

Jansons was awarded various international honours for his achievements, including Commander of the Royal Norwegian Order of Merit from King Harald of Norway and memberships in the Royal Academy of Music in London and the Gesellschaft der Musikfreunde (Society of Music Friends) in Vienna. He was awarded the St. Hallvard Medal in 1986.[42] In May 2006, he was awarded the Order of the Three Stars (2nd class or Grand Commander), Latvia's highest state honour. He was awarded the Bavarian Order of Merit in 2007 and in 2010, the Bavarian Maximilian Order for Science and Art. In 2008, Jansons received the Austrian Cross of Honour for Science and Art.[43]

Jansons' recording of Shostakovich's Symphony No. 13 with Sergey Aleksashkin (bass) and the Bavarian Radio Symphony Orchestra and Chorus won the Grammy Award for Best Orchestral Performance at the 2006 Grammy Awards.[44]

Jansons won the Ernst von Siemens Music Prize in 2013.[46] On 31 March 2013 Jansons was awarded a medal of honour "For the Merits before St. Petersburg". On 4 October 2013, Jansons received the Grand Merit Cross with Star of the Federal Republic of Germany.[47]

On 1 November 2013, Jansons was awarded Knight of the Order of the Netherlands Lion and received it from Dutch Minister of Education, Culture and Science Jet Bussemaker.[48]

In November 2017,[49] the Royal Philharmonic Society awarded Jansons the RPS Gold Medal, with Mitsuko Uchida presenting the medal to Jansons during a concert with the Bavarian Radio Symphony Orchestra (Symphonieorchester des Bayerischen Rundfunks) on 24 November 2017 at the Barbican Hall.[50] Jansons was the 104th recipient of the RPS Gold Medal.

In 2018, Jansons was awarded Honorary Membership of the Berlin Philharmonic Orchestra,[51] and in June 2018 of the Vienna Philharmonic.[52]

On 14 April 2019, Jansons received the Herbert von Karajan Prize at the Salzburg Easter Festival.[53] In 2019, he received the Opus Klassik award in the category "Lifetime Achievement”.[54]

In 2020, the BRSO posthumously awarded its Karl Amadeus Hartmann Medal to Jansons.[55]

Jansons is credited on over 190 orchestral recordings.[56]