Otto Nossan Klemperer (14 May 1885 – 6 July 1973) was a German-born orchestral conductor and composer, described as "the last of the few really great conductors of his generation."[1]

Otto Klemperer was born in Breslau, Province of Silesia, in what was then the Imperial German state of Prussia; the city is now Wrocław, Poland.[2] His father Nathan Klemperer was originally from Josefov, the Jewish ghetto in the Bohemian city of Prague (now in the Czech Republic).[3] His mother was a Sephardic Jew from Hamburg.[3] Otto Klemperer studied music first at the Hoch Conservatory in Frankfurt, and later at the Stern Conservatory in Berlin under James Kwast and Hans Pfitzner. He followed Kwast to three institutions and credited him with the whole basis of his musical development. In 1905, he met Gustav Mahler while conducting the off-stage brass at a performance of Mahler's Symphony No. 2, Resurrection. He also made a piano arrangement of the second symphony.[4] Klemperer got the opportunity to present this work to Mahler in February 1907, on the occasion of the first of three trips to Vienna with Jacques van Lier. Mahler and Klemperer became friends, and Klemperer became conductor at the German Opera in Prague in 1907 on Mahler's recommendation.[5] Mahler wrote a short testimonial, recommending Klemperer, on a small card which Klemperer kept for the rest of his life. Later, in 1910, Klemperer assisted Mahler in the premiere of his Symphony No. 8, Symphony of a Thousand.

When the Nazi Party gained power in 1933, Klemperer left Germany shortly afterwards, first to Austria then to Switzerland.[2] He had previously converted to Catholicism,[6] but returned to Judaism at the end of his life. In 1935, he migrated to the United States, residing in California after being appointed music director of the Los Angeles Philharmonic.[2] While in Los Angeles, he began to concentrate more on the standard works of the Germanic repertoire that would later bring his greatest acclaim, particularly the works of Beethoven, Brahms and Gustav Mahler, though he gave the Los Angeles premieres of some of fellow Los Angeles resident Arnold Schoenberg's works with the Philharmonic. He also visited other countries, including the United Kingdom and Australia. While the orchestra responded well to his leadership, Klemperer had a difficult time adjusting to life and climate in Southern California, a situation exacerbated by repeated manic-depressive episodes, reportedly as a result of severe cyclothymic bipolar disorder. He also found that the dominant musical culture and leading music critics in the United States were largely unsympathetic to modern music from Weimar's Golden Age, and he felt both the music and his support of it were not properly appreciated.[7] 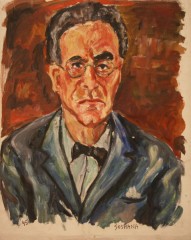 Klemperer hoped for a permanent position as principal conductor in New York or Philadelphia, but in 1936 he was passed over for both  – first in Philadelphia, where Eugene Ormandy succeeded Leopold Stokowski at the Philadelphia Orchestra, and then in New York, where Arturo Toscanini's departure left a vacancy at the New York Philharmonic but John Barbirolli and Artur Rodziński were engaged in preference to Klemperer. The New York decision was particularly galling, as Klemperer had been engaged to conduct the first fourteen weeks of the New York Philharmonic's 1935–6 season, and Toscanini himself had suggested Klemperer as a possible replacement. Klemperer's bitterness at this decision was voiced in a letter he wrote to the Philharmonic's manager, Arthur Judson: "that the society did not reengage me is the strongest offense, the sharpest insult to me as artist, which I can imagine. You see, I am no youngster. I have a name and a good name. One could not use me in a most difficult season and then expell me. This non-reengagement will have very bad results not only for me in New York but in the whole world... This non-reengagement is an absolutely unjustified wrong done to me by the Philharmonic Society."[7][8]

Then, after completing the 1939 Los Angeles Philharmonic summer season at the Hollywood Bowl, Klemperer was visiting Boston and was diagnosed with a brain tumor; the subsequent surgery to remove "a tumour the size of a small orange" left him partially paralyzed. He went into a deep depression and was placed in an institution from which he escaped. The New York Times ran a cover story declaring him missing, and after he was found in New Jersey, a humiliating photo of him behind bars was printed in the Herald Tribune. Though he would occasionally conduct the Philharmonic after that, he lost the post of Music Director.[9] Furthermore, his erratic behavior during manic episodes made him an undesirable guest conductor of US orchestras, and the late flowering of his career centered in other countries. In 1940, Klemperer became a US citizen.[2]

Klemperer (left) with members of the Cologne Radio Symphony Orchestra, 1954

In the early 1950s, Klemperer experienced difficulties arising from his US citizenship. American union policies made it difficult for him to record in Europe, while his left-wing views made him increasingly unpopular with the State Department and FBI. In 1952, the US refused to renew his passport; in 1954, Klemperer returned to Europe and acquired a German passport.[7][11]

Klemperer's career was revitalized in 1954 by Walter Legge, the London-based record producer and founder/manager of the Philharmonia Orchestra. Legge engaged Klemperer to conduct the Philharmonia in performances of music by Beethoven (the complete symphonies cycle, some symphonies recorded several times), Brahms (complete symphonies et al.) and much more repertoire for EMI Records. Klemperer became the first principal conductor of the Philharmonia Orchestra in 1959. He settled in Switzerland at this time. He also appeared at the Royal Opera House Covent Garden, sometimes stage-directing as well as conducting, as in a 1963 production of Richard Wagner's Lohengrin. Klemperer also conducted Mozart's Die Zauberflöte there in 1962.

A severe fall during a visit to Montreal in 1951 forced Klemperer to conduct seated in a chair. A severe burn, which resulted from his smoking in bed and trying to douse the flames with the contents of a bottle of alcohol, further paralyzed him. Through Klemperer's health issues, the tireless and unwavering support and assistance of his daughter Lotte, were crucial to his success.[12]

One of his last concert tours was to Jerusalem, a couple of years after the Six-Day War, at which time he was awarded an Israeli honorary passport.[13] Klemperer had performed in Israel before it became a state, and returned to Jerusalem only in 1970 to conduct the Israeli Broadcasting Authority Symphonic Orchestra in two concerts, performing the six Brandenburg Concertos of Bach, and Mozart's symphonies 39, 40 and 41. During this tour he took Israeli citizenship. He retired from conducting in 1971.

Klemperer died in Zürich, Switzerland, in 1973, aged 88, and was buried at Zürich's Jewish Cemetery Oberer Friesenberg, owned and provided for by the Jewish Religious Community of Zurich.[14]

He was an Honorary Member (HonRAM) of the Royal Academy of Music.

Klemperer is less well known as a composer, but like other famous conductors such as Furtwängler, Walter and Markevitch, he wrote a number of pieces, including six symphonies (only the first two were published), a Mass, nine string quartets, many lieder and the opera Das Ziel. He tried periodically to have his music performed, as he had hopes of being remembered as a composer as well as a conductor, but found little success. His works have generally fallen into neglect since his death, although commercial recordings of a few of his symphonic pieces have been issued.[15][16] Four of his string quartets and a selection of piano pieces and songs have been recorded in two limited edition CDs.[17] Klemperer about 1920.
This section possibly contains original research. Please improve it by verifying the claims made and adding inline citations. Statements consisting only of original research should be removed. (January 2018) (Learn how and when to remove this template message)

Many listeners associate Klemperer with slow tempos, but recorded evidence shows that in earlier years his tempi could be quite a bit faster. For example, one of Klemperer's most noted performances was of Beethoven's Symphony No. 3, Eroica. Eric Grunin's Eroica Project contains tempo data on 363 recordings of the work from 1924 to 2007, and includes 10 by Klemperer – some recorded in the studio, most from broadcasts of live concerts. The earliest Klemperer performance on tape was recorded in concert in Cologne in 1954 (when he was 69 years old); the last was in London with the New Philharmonia Orchestra in 1970 (when he was 85). The passing years show a clear trend with respect to tempo: as Klemperer aged, he took slower tempi. In 1954, his first movement lasts 15:18 from beginning to end; in 1970 it lasts 18:41. In 1954 the main tempo of the first movement was about 135 beats per minute, in 1970 it had slowed to about 110 beats per minute. In 1954, the Eroica second movement, "Funeral March", had a timing of 14:35; in 1970, it had slowed to 18:51. Similar slowings took place in the other movements. Around 1954, Herbert von Karajan flew especially to hear Klemperer conduct a performance of the Eroica, and later he said to him: "I have come only to thank you, and say that I hope I shall live to conduct the Funeral March as well as you have done".

Similar, if less extreme, reductions in tempi can be noted in many other works for which Klemperer left multiple recordings, at least in recordings from when he was in his late 70s and his 80s. For example:

(a) Mozart's Symphony No. 38 Prague, another Klemperer specialty. In his concert recording from December 1950 (when he was 65 years old) with the RIAS Berlin Orchestra the timings are I. 9:45 (with repeat timing omitted; the performance actually does take the repeat); II. 7:45; and III. 5.24. In his studio March 1962 recording of the same work with the Philharmonia (recorded when he was 77 years old), the timings are notably slower: I. 10:53 (no repeat was taken); II. 8.58; III. 6:01. Unlike the late Eroica, the 1962 Prague is not notably slow; rather, the 1950 recording is much faster than most recordings of the work, even by "historically informed" conductors.

Regardless of tempo, Klemperer's performances often maintain great intensity, and are richly detailed. Eric Grunin, in a commentary on the "opinions" page of his Eroica Project, notes: "....The massiveness of the first movement of the Eroica is real, but is not its main claim on our attention. That honor goes to its astonishing story (structure), and what is to me most unique about Klemperer is that his understanding of the structure remains unchanged no matter what his tempo... ". The German works of Kurt Weill were amongst Klemperer's favorites and he encouraged Weill to compose the orchestral suite Kleine Dreigroschenmusik.

Four years after his death, the First Movement from Klemperer's recording of Beethoven's 5th Symphony with the Philharmonia Orchestra was selected by NASA to be included on the Voyager Golden Record, a gold-plated copper record that was sent into space on the Voyager space craft. The record contained sounds and images which had been selected as examples of the diversity of life and culture on Earth.[19][20][21]

Klemperer made many recordings which are regarded as classics. Among the most noteworthy are:

Klemperer conducted his own Symphony No 2 in a 1970 EMI recording (ASD 2575) that also included his seventh string quartet.

Klemperer's last recording, of Mozart's Serenade in E-flat, K.375, was made on 28 September 1971, the last time he conducted (apart from his conducting of a solitary movement from Beethoven's 7th Symphony in Munich on 6 September 1972, as mentioned above).

In 1919, Klemperer married soprano Johanna Geisler.[22] They had two children, including Werner Klemperer, who became an actor.[12]

The diarist Victor Klemperer, who chronicled his life in the Weimar Republic and Nazi Germany, was a cousin.[23]