Savannah State operates four colleges (College of Business Administration, College of Liberal Arts and Social Sciences, College of Sciences and Technology and the Savannah State University College of Education). In addition to four distinct academic colleges, the university also offers Office of Graduate Studies and Sponsored Research (OGSSR).[9] It also participates in research centers and programs at the Center for Teaching, Learning and Academic Support; Savannah Entrepreneurial Center; the Midtown Project; the Georgia Institute of Technology Regional Engineering Program (GTREP); and "A Collaboration to Integrate Research and Education in Marine and Environmental Science and Biotechnology" with the Skidaway Institute of Oceanography, part of the University of Georgia.[9][10][11]

Savannah State University was founded as a result of the Second Morrill Land Grant Act of August 30, 1890.[9] The act mandated that southern and border states develop land grant colleges for black students, as their systems were segregated. On November 26, 1890, the Georgia General Assembly passed legislation creating the Georgia State Industrial College for Colored Youth.[12]

A preliminary session of the school was held in the Baxter Street School Building in Athens, where Richard R. Wright Sr. was principal.[14] The college operated in Athens for several months in 1891 before moving to its permanent location in Savannah on October 7, 1891, with Wright as the first president.[13] The school had five faculty members. Its eight students were all graduates of Edmund Asa Ware High School, the first public high school for blacks in Augusta.[14]

The college awarded its first baccalaureate degree in 1898.[3] In 1921 the first female students were admitted as residents on the campus.[3][14] In 1928 the college became a full four-year degree-granting institution and ended the high school and normal school programs. Normal schools had been created in the 19th century in many state systems in the United States, after the German model, to educate teachers for elementary school students. With the expansion of towns across the US, and continuing issues in trying to educate four million freedmen and their descendants, there was an urgent need to establish many new schools and to quickly train teachers in the North and the South. States used normal schools for training teachers for primary school grades and sometimes secondary school as well. Normal schools or colleges tended to have two or three-year programs. Gradually the normal schools were converted to full colleges with four-year curricula, or were left behind.[3][14]

With the growth in its graduate and research programs, in 1996 the Board of Regents of the University System of Georgia elevated Savannah State College to the status of state university and the name was changed to Savannah State University.[9]

Students may choose from 23 accredited undergraduate baccalaureate and 5 graduate master's degree programs offered through the university's colleges. The university has developed new partnerships that expand the range of programs and resources for students. Taking advantage of its location on the coast, the university's Marine Biology Department operates two research vessels: the R/V Sea Otter (a 35 ft (11 m) twin diesel vessel owned by NOAA) and the R/V Tiger (a 22 ft (6.7 m) outboard work boat).[26] In the fall of 2007 Savannah State teamed with the U.S. Army Corps of Engineers to offer a new course in environmental regulations, so students can deepen understanding of policy and implementation issues. The program also helps them learn about specific environmental topics.[27]

Accredited by the Commission on Colleges of the Southern Association of Colleges and Schools, Savannah State University also has achieved fully accredited programs in specialized areas of science and engineering:

Oversight is provided by the University System of Georgia, the organizational body that sets goals and dictates general policy to all public educational institutions in the state.

Savannah State is a public institution, receiving funds from the State of Georgia, tuition, fees, research grants, private scholarship funds (including the Thurgood Marshall Scholarship Fund and the Tom Joyner Foundation), and alumni contributions.[31] The University System of Georgia is governed by the Georgia Board of Regents and dispenses public funds (allocated by the state's legislature) to Savannah State, excluding lottery-funded HOPE Scholarships. The university's endowment was $2,433,508.[32] As of FY05, the university's budget was $42,155,964.[33] In FY06, the university received $7,725,311 in research, instruction, and public service contracts and grants.[34] 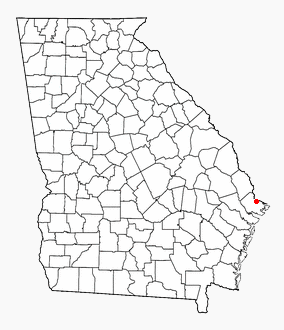 Savannah State University is located approximately 5 miles (8 km) east southeast from the center of Savannah, 250 miles (402 km) from Atlanta, and 120 miles (193 km) from Jacksonville, Florida.[35] The campus is accessible from Interstate 95 and Interstate 16.[6] Spanish moss drapes the dense live oak trees, while palm trees, magnolias, and a wide variety of azaleas, camellias, and other native plants are scattered throughout the 201-acre (813,418.1 m2) marsh-side campus.

The original campus consisted of 86 acres (348,030 m2) and three buildings (Boggs Hall, Parsons Hall and a farmhouse), with 51 acres (206,390 m2) of the land serving as the school's farm.[36] Several of the campus' older buildings were originally constructed by students and faculty members, and display architectural styles from the past century.[6]

Walter Bernard Hill Hall, built between 1900 and 1901 by students studying manual arts and blacksmithing, was added to the National Register of Historic Places in 1981.[38][39] The facility had a variety of uses, including a bookstore, student center, male dormitory, and library. Needing too much renovation for continued use, the building was closed in 1996. The university and community created the Hill Hall Restoration Project to raise money for the project. After restoration, the building was reopened in 2008.[38] It houses the university's Enrollment Management Center, a presidential suite, administrative offices, a lecture hall, a banquet room, and a small museum.[40]

On October 15, 2007, Savannah State broke ground on a new academic building which was dedicated on May 1, 2009.[42][43] It includes 10 classrooms, three lecture rooms, three computer labs, and applied research and observation labs.[43][44] The building also houses the Africana studies exhibit, the Dean of Humanities and faculty offices, Public Administration/Urban Studies, and the Social Work and Social and Behavioral Sciences departments.[44]

The SSU Wesleyan Gospel Choir was established in 1971.[47] In 2004 the choir completed and released a live album, entitled RLW: "Revelation, Love, & Worship".[48] Members of the Wesleyan Gospel Choir participated in the NBCAHF Inaugural Gospel Explosion competition in 2006 and the International Gospel Retreat, which aired on The Word Network.[47] In 2007 the choir performed at the Dr. Bobby Jones International Gospel Music Industry Retreat, which was also broadcast on The Word Network. The choir performed with Ann Nesby during the 13th annual Savannah Black Heritage Festival.[49] The university band, nicknamed the "Powerhouse of the South", performs during Savannah State football games. They were featured performers in the Honda Battle of the Bands in 2004 and 2005.

All nine of the National Pan-Hellenic Council organizations currently have chapters at Savannah State University.[50][51] These organizations are:

Other national fraternities and sororities with registered chapters currently on campus include:

At one time Alpha Phi Omega service fraternity had a registered chapter at Savannah State.

The Tiger's Roar is the official student-produced newspaper of Savannah State University and provides both a print and online version.[52]

SSU operates WHCJ (FM) radio, which broadcasts 24 hours a day from the campus, covers all of Chatham County, and can also be heard in Effingham, Bryan, Beaufort, and Liberty counties.[53]

Established in 1975 and known as "the Voice of Savannah State University", WHCJ's current play formats include gospel, jazz, reggae, blues and salsa music, as well as talk shows, commentaries, and cultural enrichment programming.[54] The Savannah State Tigers represent the university in college intercollegate athletics and are administered by the Savannah State University Athletic Department. The department dedicates about $2 million per year for its sports teams and facilities.[55]

Savannah State University holds membership in the National Collegiate Athletic Association (NCAA) Division II as a member of the Southern Intercollegiate Athletic Conference (SIAC) and participates in the following sports: football, baseball, basketball (men and women), cross-country (men and women), tennis (men and women), track and field (men and women), volleyball (women only), golf (men), and softball (women).[56] In April 2017 Savannah State University President Cheryl Dozier announced the school intends to reclassify all athletic programs to Division II[57] The move back to Division II is expected to occur for the 2019-20 academic year. The Georgia school would end its membership in the Mid-Eastern Athletic Conference, which it joined in 2010[58]

The school gained notoriety when they finished the 2004–2005 men's basketball season a winless 0–28, the first Division I team to do so since Prairie View A&M University in 1991–1992.[59][60] The team's final game (a 49–44 loss to Florida A&M) was covered by several national sports organizations including ESPN.

A.^ On April 19, 2011 the Georgia Board of Regents for the University System of Georgia voted not to renew Dr. Earl Yarbrough's annual contract as president of the university.[62] Cheryl Davenport Dozier was named as acting president of the university on April 21, 2011 and the Georgia Board of Regents plans to conduct a national search for Yarbrough's replacement.[63] Dr. Dozier became the permanent president on May 9, 2012.[64]