Shaved ice is a large family of ice-based desserts made of fine shavings of ice or finely crushed ice and sweet condiments or syrups. Usually, the syrup is added after the ice has been frozen and shaved—typically at the point of sale; however, flavoring can also be added before freezing. The dessert is consumed worldwide in various forms and ways. Shaved ice can also be mixed with large quantities of liquid to produce shaved ice drinks.

Many shaved ices are confused with "Italian ice", which is derived from the similar Italian dessert known as "granita". However, Italian ice, also known as "water ice", often has the flavoring (fruit juice or other ingredients, like almond) incorporated into the sugared water before it is frozen. Shaved ice—especially highly commercial shaved ice (such as that found in food chains or from street vendors)—is often flavored after the ice has been frozen and shaved. Snow cones are an example of shaved ice that is flavored after production. The first documented "shaved ice" dessert was made in 27 B.C.E. The Roman Emperor Nero sent slaves to collect snow from nearby mountains that he then flavored with a fruit and honey mixture.[1][citation needed]

In imperial Japan, the dessert was also a treat reserved for royalty, as it was made of natural ice formed during the coldest period of winter, which was stored in icehouses. This made it very rare, and a supreme luxury available only to Heian period nobles; ordinary people could not afford it.[2] Halo-halo is believed to be a Filipino indigenized version of the Japanese kakigori class of desserts, originating from prewar Japanese migrants into the Philippine islands. The earliest versions were composed only of cooked red beans or mung beans in crushed ice with sugar and milk, a dessert known locally as "mongo-ya". Over the years, more native ingredients were added, resulting in the development of the modern halo-halo.[3][4] Some authors specifically attribute the invention of halo-halo to the 1920s or 1930s Japanese migrants in the Quinta Market of Quiapo, Manila, due to its proximity to the now defunct Insular Ice Plant, which was the source of the city's ice supply.[5] As Japanese people immigrated to Hawaii, they brought this tradition with them. Like Rome and Japan, in Hawaii warm areas are close enough to snow-capped mountains that snow can be brought into the warm areas without melting.

Shave ice varieties can be found around the globe with Asia being a particularly popular region.[6]

In Latin America shaved ice desserts have influences from North American cultures, in many of these locations the Spanish name is either raspado, or its variations; raspa, raspao, raspadinha (raspar is Spanish for "scrape"; hence raspado means "scraped", referring to the ice, therefore also meaning shaved), or granizado, granizada, granizo (from granizo, meaning hail stone).

North America and the Caribbean A machine used for shaving ice for shaved ice desserts. 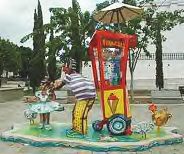 Artistic representation of a Piragua cart. In East Asia, shaved ice desserts are not only flavoured with various types of syrup. It is also common to add solid ingredients such as red bean paste, jellies, canned fruits, jams, sweetened condensed milk, and many other types of sweetened foods to vary the textures of the ice dessert. In South Asia, snow cones are enjoyed as a low-cost summer treat, often shaved by hand.

This section needs expansion with: details of kinds of shaved ice popular in Turkey, Lebanon, Syria. You can help by adding to it. (February 2018) When large quantities of liquids are added to shaved ice, shaved ice drinks are produced