Branch of mechanics concerned with balance of forces in nonmoving systems

Statics is the branch of mechanics that is concerned with the analysis of (force and torque, or "moment") acting on physical systems that do not experience an acceleration (a=0), but rather, are in static equilibrium with their environment. The application of Newton's second law to a system gives:

Where bold font indicates a vector that has magnitude and direction.

is the total of the forces acting on the system,

is the mass of the system and

is the acceleration of the system. The summation of forces will give the direction and the magnitude of the acceleration and will be inversely proportional to the mass. The assumption of static equilibrium of

is the summation of all moments acting on the system,

is the moment of inertia of the mass and

= 0 the angular acceleration of the system, which when assumed to be zero leads to:

The summation of moments, one of which might be unknown, allows that unknown to be found. These two equations together, can be applied to solve for as many as two loads (forces and moments) acting on the system. 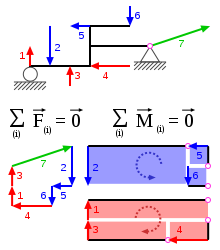 Example of a beam in static equilibrium. The sum of force and moment is zero.

A scalar is a quantity which only has a magnitude, such as mass or temperature. A vector has a magnitude and a direction. There are several notations to identify a vector, including:

Vectors are added using the parallelogram law or the triangle law. Vectors contain components in orthogonal bases. Unit vectors i, j, and k are, by convention, along the x, y, and z axes, respectively.

Forces are classified as either contact or body forces. A contact force is produced by direct physical contact; an example is the force exerted on a body by a supporting surface. A body force is generated by virtue of the position of a body within a force field such as a gravitational, electric, or magnetic field and is independent of contact with any other body. An example of a body force is the weight of a body in the Earth's gravitational field.[5]

Moment of a force

In addition to the tendency to move a body in the direction of its application, a force can also tend to rotate a body about an axis. The axis may be any line which neither intersects nor is parallel to the line of action of the force. This rotational tendency is known as the moment (M) of the force. Moment is also referred to as torque.

Moment about a point Diagram of the moment arm of a force F.

The direction of the moment is given by the right hand rule, where counter clockwise (CCW) is out of the page, and clockwise (CW) is into the page. The moment direction may be accounted for by using a stated sign convention, such as a plus sign (+) for counterclockwise moments and a minus sign (−) for clockwise moments, or vice versa. Moments can be added together as vectors.

In vector format, the moment can be defined as the cross product between the radius vector, r (the vector from point O to the line of action), and the force vector, F:[6]

The static equilibrium of a particle is an important concept in statics. A particle is in equilibrium only if the resultant of all forces acting on the particle is equal to zero. In a rectangular coordinate system the equilibrium equations can be represented by three scalar equations, where the sums of forces in all three directions are equal to zero. An engineering application of this concept is determining the tensions of up to three cables under load, for example the forces exerted on each cable of a hoist lifting an object or of guy wires restraining a hot air balloon to the ground.[7]

While a simple scalar treatment of the moment of inertia suffices for many situations, a more advanced tensor treatment allows the analysis of such complicated systems as spinning tops and gyroscopic motion.

The concept was introduced by Leonhard Euler in his 1765 book Theoria motus corporum solidorum seu rigidorum; he discussed the moment of inertia and many related concepts, such as the principal axis of inertia.

Hydrostatics, also known as fluid statics, is the study of fluids at rest (i.e. in static equilibrium). The characteristic of any fluid at rest is that the force exerted on any particle of the fluid is the same at all points at the same depth (or altitude) within the fluid. If the net force is greater than zero the fluid will move in the direction of the resulting force. This concept was first formulated in a slightly extended form by French mathematician and philosopher Blaise Pascal in 1647 and became known as Pascal's Law. It has many important applications in hydraulics. Archimedes, Abū Rayhān al-Bīrūnī, Al-Khazini[8] and Galileo Galilei were also major figures in the development of hydrostatics.

Wikimedia Commons has media related to Particle equilibrium.
Look up statics in Wiktionary, the free dictionary.
Wikibooks has a book on the topic of: Statics
Branches of physics
Authority control: National libraries
Categories
Categories: