It owes its origins to the radical element of an older organisation also commonly referred to as the "Anti-Slavery Society", the Society for the Mitigation and Gradual Abolition of Slavery Throughout the British Dominions, which had substantially achieved abolition of slavery in the British Empire by August 1838.[1]

The new British and Foreign Anti-Slavery Society was created to campaign against the practice of slavery in other countries. 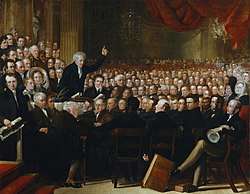 A painting of the 1840 World's Anti-Slavery Convention. Use a cursor to see who is who.[7] Buxton Memorial Fountain, celebrating the emancipation of slaves in the British Empire in 1834, in Victoria Tower Gardens, Millbank, Westminster, London

The Society for the Mitigation and Gradual Abolition of Slavery Throughout the British Dominions, later known as the (London) Anti-slavery Society, was founded in 1823 and was committed to the abolition of slavery in the British Empire, which was substantially achieved in 1838 under the terms of the Slavery Abolition Act 1833.

The first secretary was John Harfield Tredgold, the first treasurer, George William Alexander of Stoke Newington. Along with the founding committee, which included the Anglican Thomas Fowell Buxton, the Quaker William Allen, and the Congregationalist Josiah Conder, they organised the first World Anti-Slavery Convention in London in 1840,[10] that attracted delegates from around the world (including from the United States of America, in the South of which slavery was at times referred to as "our peculiar institution") to the Freemasons' Hall, London on 12 June 1840. Many delegates were notable abolitionists, with Thomas Clarkson the key speaker, and the image of the meeting was captured in a remarkable painting that still hangs in the National Portrait Gallery in London.[11] The convention had been advertised as a "whole world" convention, but the delegates representing anti-slavery societies in the United States included several women, among them Lucretia Mott and Elizabeth Cady Stanton, who later were instrumental in the movement for women's rights. Convention leaders refused to seat the women delegates from America, and prominent male abolitionists such as Thomas Knight were outraged. He went on to form his own society.[citation needed]

In the 1850s, under Louis Chamerovzow, the society helped John Brown write and publish his autobiography a decade before the American Civil War ended slavery in the United States.

The second secretary of the Anti-Slavery Society, appointed under the honorary secretaries Joseph Cooper and Edmund Sturge, was the Rev. Aaron Buzacott (1829–81), the son of a South Seas missionary also named Aaron Buzacott. With American slavery abolished in 1865, Buzacott worked closely with Joseph Cooper in researching and publishing work designed to help abolish slavery in elsewhere, particularly in the Middle East, Turkey and Africa.

At the beginning of the 20th century Anti-Slavery Society campaigned against slavery practices perpetrated in the Congo Free State by King Leopold II of Belgium. It was the first campaign in history that used photography to document the abuses (photographs were taken by the missionary Alice Seeley Harris). The campaign eventually helped bring an end to Leopold's tyranny.[citation needed]

In the 1920s the Society helped end the indentured labour system in the British colonies after campaigning against the use of Indian and Chinese "coolies". In 1921 Played a pivotal role in ending the activities of the Peruvian Amazon Company, which was using indigenous slave labour in rubber production. The organisation also successfully lobbied for the League of Nations inquiry into slavery, which resulted in the 1926 Slavery Convention that obliged all ratifying states to end slavery.[citation needed] It also heavily influenced the content of the 1956 UN Supplementary Convention on the Abolition of Slavery.

In 1944, a Journalist James Ewing Ritchie issued a paper to the society on sugar trade and slavery.[10]

Anti-Slavery International was one of the original supporters of the "End Child Prostitution, Pornography and Trafficking" campaign (ECPAT), and helped set up the UK branch in the 1990s. It also helped to organise the 1998 Global March against Child Labour, which helped lead to the adoption of a new International Labour Organization Convention on the Worst Forms of Child Labour in 1999.[15]

In the 21st century it worked with Nepalese NGO INSEC to secure Government backing to abolish the Kamaiya form of bonded labour; in 2003 with local NGO Timidria conducted a survey that led to the criminalisation of slavery in Niger, and lobbied the Brazilian government to introduce a National Plan for the Eradication of Slavery.[citation needed] Two years later ASI organised a major campaign on child camel jockeys in the Gulf States, which influenced the UAE's decision to rescue and repatriate up to 3,000 child camel jockeys.

In the UK, it successfully lobbied to make trafficking of sexual and labour exploitation a criminal offence in 2004.[citation needed]

In 2008 it was amongst groups that supported a former slave, Hadijatou Mani, in obtaining the verdict of the Economic Community of West African States (ECOWAS) court that found the state of Niger guilty of failing to protect her from slavery. The ruling set a legal precedent with respect to the obligations of states to protect its citizens from slavery[16]

In June 2010, following the campaign by Anti-Slavery International and Liberty the UK Parliament introduced a criminal offence of forced labour in the Coroners and Justice Act 2009.[citation needed] In 2010 the organisation also exposed the routine use of the forced labour of girls and young women in the manufacture of garments in Southern India for Western high streets, prompting, eventually, business and international civil society efforts to end the practice.

Anti-Slavery lobbied the UK government to sign up to an EU anti-trafficking law to protect the victims and secure justice for people who have been trafficked (2011). It also played a big part in lobbying the International Labour Organization to adopt a Convention on Decent Work for Domestic Workers in June 2011.[citation needed]

In 2021 Anti-Slavery International has pressured businesses and governments to address conditions in the Xinjiang cotton industry.[17]

The society published The Anti-Slavery Reporter from 1839, taking over from the earlier organisation (named the London Anti-slavery Society in its last year of existence[18]).[19]

Human trafficking is the illegal transportation of kidnapped women, children, and men across international borders in order to put them into slavery at the destination. This form of modern slavery is one of the most common and may affect the most people: it is estimated that between 500,000 and 800,000 victims enter the trade each year.

Anti-Slavery International points to the lack of enforcement of existing laws as a barrier to stopping human trafficking. Discrimination on the basis of social status, religion, ethnicity, gender and immigration status operate as additional barriers.[22] The organization joined more than 180 other groups in a campaign to pressure retailers such as Nike, Apple and Gap to stop using forced labour of Uighurs in their factories located in China.[23]

Anti-Slavery International instituted the Anti-Slavery Award in 1991 to draw attention to the continuing problem of slavery in the world today and to provide recognition for long-term, courageous campaigning by organisations or individuals in the countries most affected.