The Atlantic 10 Conference (A-10) is a collegiate athletic conference whose schools compete in the National Collegiate Athletic Association's (NCAA) Division I. The A-10's member schools are located in states mostly on the United States Eastern Seaboard, as well as some in the Midwest: Massachusetts, New York, North Carolina, Pennsylvania, Rhode Island, Virginia, Ohio, and Missouri as well as in the District of Columbia. Although some of its members are state-funded, half of its membership is made up of private, Catholic institutions. Despite the name, there are 14 full-time members, and two affiliate members that participate in women's field hockey only. The current commissioner is Bernadette McGlade, who began her tenure in 2008.

This section needs additional citations for verification. Please help improve this article by adding citations to reliable sources. Unsourced material may be challenged and removed. (January 2016) (Learn how and when to remove this template message)
Atlantic 10 Conference
[Interactive fullscreen map]
Locations of A10 members

The Atlantic 10 Conference was founded in 1975 as the Eastern Collegiate Basketball League (ECBL) and began conference play in 1976. At that time, basketball was its only sport. After its first season, it added sports other than basketball and changed its name to the Eastern Athletic Association. However, despite its official names, it was popularly known as the Eastern 8, as it then had eight members (Villanova, Duquesne, Penn State, West Virginia, George Washington, Massachusetts, Pittsburgh, and Rutgers).

Further membership changes saw the league expand to its maximum of 16 members. From 1997 through 2006, the league also operated a football conference; during that period, more than 20 schools were participating in A-10 competition in at least one sport. This ended when the A-10 football programs all departed to join a new football conference sponsored by the Colonial Athletic Association (CAA). In 2012, Butler joined the conference after leaving the Horizon League and VCU joined after leaving the CAA.

Conference realignment in 2013 saw the departure of Temple to the American Athletic Conference, Butler and Xavier to the reconfigured Big East, and Charlotte to Conference USA. George Mason joined from the CAA, and Davidson from the Southern Conference announced it would join in 2014.

The league office headquarters has been located in Newport News, Virginia since fall 2009.[1] Prior to that, the headquarters was in Philadelphia, within a few miles of member schools Saint Joseph's and La Salle.

On November 16, 2021, Loyola University Chicago announced that its athletic program - the Loyola Ramblers - will depart the Missouri Valley Conference and join the Atlantic 10 Conference for the 2022–23 season effective July 1, 2022.[2]

The latest change to the A-10 was announced on May 23, 2022 with the addition of men's lacrosse for the 2023 season (2022–23 school year). The four full members that sponsor the sport (Richmond, St. Bonaventure, Saint Joseph's, UMass) will be joined by affiliate members High Point and Hobart.[3]

The following is a list of the full members of the conference and the year they joined:

None of these institutions played football in the A-10 during their tenure as full members.

After expansion in the Colonial Athletic Association brought that conference to 6 football-playing schools, it was agreed that the CAA would take over management of the Atlantic 10's football conference starting in the 2007–08 school year. All the schools on this list (except Boston U. and Connecticut) were in the A-10 football conference when it became the CAA football conference, but Hofstra and Northeastern discontinued their football programs after the 2009–10 school year. Membership dates include time in the Yankee Conference (which was an all-sports conference from the 1947–48 to 1975–76 seasons, and a football-only conference after that) which merged into the A-10 in the 1997–98 school year. 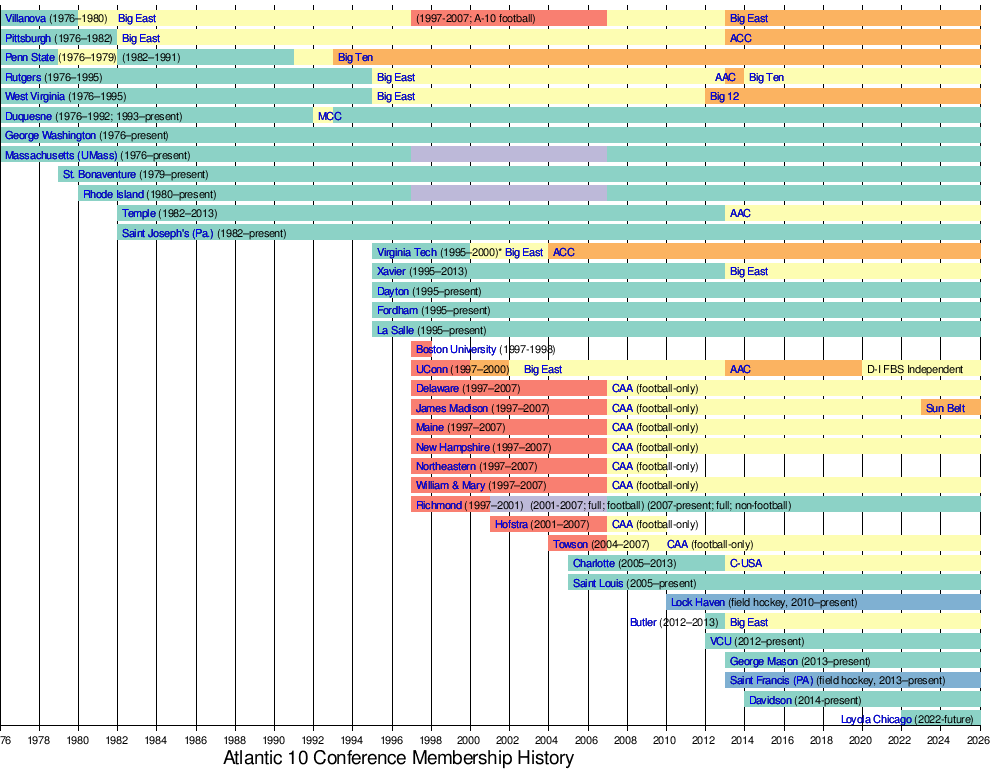 There are a number of intense rivalries within the Atlantic 10,[under discussion] with rivalries that carry over from the Big 5 which includes Saint Joseph's, La Salle, and Temple (now in the American Athletic Conference). URI and UMass also have a long-standing rivalry. St. Bonaventure and Duquesne also maintain a rivalry that predates their affiliation with the conference. UMass and Temple also had a basketball rivalry while John Chaney was coaching Temple but it has died down a bit since, and even more so now that Temple has left the conference. Due to both teams sharing the Ram mascot, the Fordham - URI rivalry has increased in recent years as the competitions are heralded as "The Battle of the Rams." The long-standing crosstown rivalry between Richmond and VCU, now known as the Capital City Classic, became a conference rivalry with VCU's arrival in the A10. Rivals St. Louis and Dayton play each year in basketball for the Arch-Baron Cup. George Washington and George Mason compete annually in the Revolutionary Rivalry across all sports.

The Atlantic 10 Conference sponsors championship competition in nine men's and twelve women's NCAA sanctioned sports, with a tenth men's sport to be added in July 2022.[7]

Regular-season champions are indicated with "(RS)" and tournament champions with "(T)".

The A-10 began sponsoring football in 1997 when it absorbed the Yankee Conference, a Division I-AA (now known as Division I FCS) football-only conference. The move was triggered by a change in NCAA rules that reduced the influence of single-sport conferences over NCAA legislation. The following teams were in the Yankee Conference at the time of its demise:

Boston University dropped football after the first season of A-10 football. After the 1999 season, UConn started a transition from Division I-AA to Division I-A football (now Division I FBS) that was completed in 2002. In 2004, UConn, already a member of the Big East for other sports, became a football member of that conference. The other schools all remained in the A-10 football conference until the management change after the 2006 season.

The 2005 move of Northeastern University, a football-only member of the A-10, to the Colonial Athletic Association for basketball and Olympic sports began a chain of events that would lead to the demise of the A-10 football conference, at least under the A-10 banner.

At that time, the CAA did not sponsor football, but five of its members in the 2004–05 academic year (Delaware, Hofstra, James Madison, Towson, and William & Mary) were football members of the A-10. The addition of Northeastern gave the CAA six schools with football programs, which under NCAA rules allows a conference to sponsor football. Northeastern agreed to join any future CAA football conference, which meant that the A-10 football conference would drop to six members once CAA football began operation.

Virginia Tech joined the A-10 in 1995 as a result of the merger that created Conference USA. They would then join the Big East as full members in 2000, following the football program which was already a member of the league. Temple remained a football-only member of the Big East until 2004; they would join the MAC for football in 2007 until 2012, and re-joined the Big East in football for the 2012 season. Temple planned to move the rest of its sports into the Big East in 2013, but the conference realigned into the football-sponsoring American Athletic Conference and a new non-football Big East. Temple joined The American. Massachusetts joined them in FBS football with membership in the MAC beginning in the 2012 season and as an FBS independent beginning in 2016. Charlotte, which started a football program in 2013, left for Conference USA.