Established in 1921, the Southern Conference ranks as the fifth-oldest major college athletic conference in the United States, and either the third- or fourth-oldest in continuous operation, depending on definitions.[1] Among conferences currently in operation, the Big Ten (1896) and Missouri Valley (1907) are indisputably older. The Pac-12 Conference did not operate under its current charter until 1959, but claims the history of the Pacific Coast Conference, founded in 1915, as its own. The Southwest Conference (SWC) was founded in 1914, but ceased operation in 1996. The Big Eight Conference claimed the same history as the Missouri Valley from 1907 to 1928 during its existence; though it essentially merged with four SWC members to form the Big 12 Conference in 1996, the Big 12 does not claim the Big Eight's legacy.[citation needed] The Ivy League was formally organized in 1954 with athletic competition starting in 1955, but claims the history of the Eastern Intercollegiate Basketball League, which competed from 1901 to 1955, as its own.

The SoCon was the first conference to use the three-point field goal in basketball in a November 29, 1980 game at Western Carolina against Middle Tennessee State University (MTSU), where Ronnie Carr shot the historic shot from 22 feet (6.7 m) away and the Catamounts won 77–70.[2][3]

The Southern Conference is considered one of the stronger football conferences in the Football Championship Subdivision and is considered a mid-major conference in basketball. The three-time Division I NCAA Football champion Appalachian State Mountaineers were a member of the conference when they stunned the fifth-ranked Michigan Wolverines 34–32 on September 1, 2007.[4] The Davidson Wildcats reached the Elite Eight in the 2008 NCAA Men's Division I Basketball Tournament by upsetting power programs Gonzaga, Georgetown, and Wisconsin.[5] More recently, the six-time Division I NCAA Football champion Georgia Southern Eagles stunned Southeastern Conference power-house Florida Gators 26–20 in The Swamp on November 23, 2013—the first loss to a lower division opponent in the Florida program's history.[6] In 2015, Furman defeated UCF 16–15 and The Citadel topped South Carolina 23–22 for their second win over the Gamecocks in the past three meetings. On September 4, 2021, East Tennessee State University stunned Vanderbilt 23–3 at their opening game. The SoCon also frequently sees multiple teams selected to participate in the NCAA Division I Baseball Championship.[7]

The SoCon is particularly notable for having spawned two other major conferences. In 1932, the 13 schools located south and west of the Appalachians (Alabama, Auburn, Florida, Georgia, Georgia Tech, Kentucky, LSU, Mississippi, Mississippi State, University of the South (Sewanee), Tennessee, Tulane, and Vanderbilt) all departed the SoCon to form the Southeastern Conference (SEC). In 1953, seven additional schools (Clemson, Duke, Maryland, North Carolina, North Carolina State, South Carolina, and Wake Forest) withdrew from the SoCon to form the Atlantic Coast Conference (ACC).[1] The SEC and ACC have gone on to surpass their parent conference in prestige; while the SEC and ACC are considered "power" conferences in Division I FBS (formerly Division I-A), the SoCon dropped to Division I-AA (FCS) in 1982, four years after the top division was split into two levels in 1978.

The SoCon became the first league to hold a post-season basketball tournament to decide a conference champion. Although first played in 1921, it did not become "official" until 1922, and in its first few years included teams which were not conference members.[12] Held at the Municipal Auditorium in Atlanta from February 24 – March 2, 1922, the first meeting was won by North Carolina who defeated non-member Mercer in the Finals 40–25.[13] The SoCon Basketball Tournament continues as the nation's oldest conference tournament. The next-oldest tournament overall is the SEC men's basketball tournament, founded in 1933, but that event was suspended after its 1952 edition and did not resume until 1979. With the demise of the Division II West Virginia Intercollegiate Athletic Conference in 2013, whose tournament had been continuously held since 1936, the next-oldest conference tournament in continuous existence is now the ACC men's basketball tournament, first held in 1954.

The all-sports membership changed to 10 schools in 2014 following the departure of Appalachian State, Davidson, Elon, and Georgia Southern, plus the arrival of East Tennessee State (ETSU), Mercer, and VMI. The current football membership stands at nine. UNC Greensboro does not sponsor football, while ETSU relaunched its previously dormant football program in 2015 and rejoined SoCon football in 2016 after one season as an independent.[14]

The 10 members of the Southern Conference are:

Men's soccer member Belmont will leave the SoCon after the 2021–22 school year when it joins the Missouri Valley Conference, which sponsors that sport.[23] At the same time, Hampton will move men's lacrosse to its new full-time home of the Colonial Athletic Association.[24]

The addition of men's lacrosse by the Atlantic 10 Conference, announced on May 23, 2022,[25] led to the demise of the SoCon men's lacrosse league after the 2022 season. In addition to Hampton joining the CAA, SoCon associate members High Point and Richmond (the latter a full A-10 member) moved to the A-10, and Jacksonville returned to ASUN men's lacrosse.

In the table below, the "Joined" column denotes the start of the school year in which the institution became an associate member, which for spring sports differs from the first season of competition.

Most former members are currently members of either the Southeastern Conference or the Atlantic Coast Conference. Two of the former full members, Appalachian State and Davidson, maintain SoCon associate membership in wrestling. A third former full member, Georgia Southern, became an associate member in rifle when the SoCon added the sport for the 2016–17 school year. 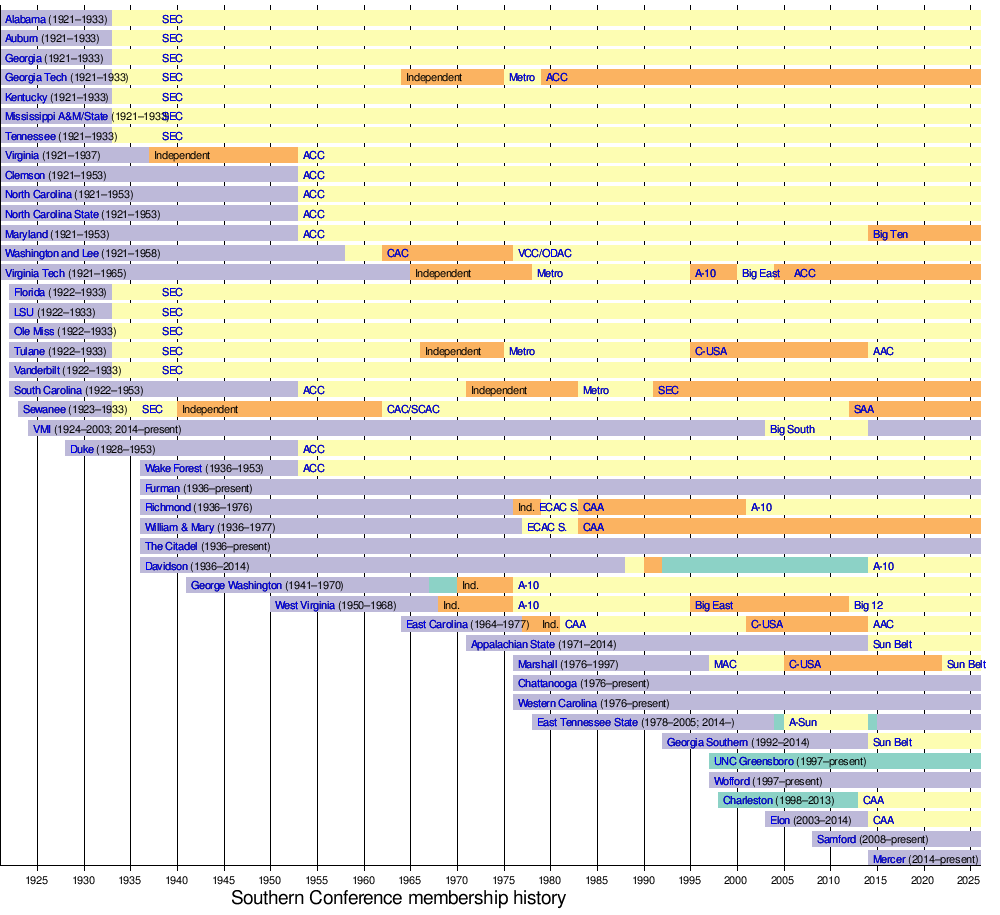 The Southern Conference sponsors championship competition in 11 men's, 9 women's, and one coeducational NCAA-sanctioned sports.[27][better source needed] Five schools are associate members for wrestling. Under a cooperative agreement with the ASUN Conference, the SoCon began sponsoring men's lacrosse in the 2014–15 school year (2015 season) with three full members (Furman, Mercer, VMI) and four associates (Bellarmine, High Point, Jacksonville, Richmond). SoCon men's lacrosse has since added Air Force. Women's lacrosse was sponsored by the ASUN through the 2017 season,[15] after which the SoCon launched its own women's lacrosse league.[16] Beginning in the 2016–17 academic year, after a 30-year hiatus, the SoCon resumed rifle as its 21st sport. Members for conference competition are full members The Citadel, VMI, and Wofford as well as associate members UAB, Georgia Southern, and North Georgia. The SoCon is one of only two all-sports conferences to sponsor rifle, joining the Ohio Valley Conference. Rifle is technically a men's sport for NCAA purposes, but men's, women's, and coed teams all compete against each other.[28] Women's lacrosse was added as the 22nd sport for 2017–18, but was dropped after the 2020–21 school year.[29]

Men's varsity sports not sponsored by the Southern Conference which are played by SoCon schools:

Women's varsity sports not sponsored by the Southern Conference which are played by SoCon schools:

This is a partial list of the last 10 champions. For the full history, see List of Southern Conference football champions.

This is a partial list of the last 10 regular-season and tournament champions. For the full history, see List of Southern Conference men's basketball champions.

The Southern Conference split into a divisional format for basketball beginning with the 1994–95 season.

However, the divisional format was abandoned beginning with the 2013–14 season.

This is a partial list of the last 10 tournament champions. For the full history, see Southern Conference women's basketball tournament

This is a partial list of the last 10 champions. For the full history, see Southern Conference baseball tournament.