The Duke Blue Devils are the intercollegiate athletic teams that represent Duke University, located in Durham, North Carolina. Duke's athletics department features 27 varsity teams that all compete at the National Collegiate Athletic Association (NCAA) Division I level. The name comes from the French "les Diables Bleus" or "the Blue Devils," which was the nickname given during World War I to the Chasseurs Alpins, the French Alpine light infantry battalion.[2][3]

Duke joined the Southern Conference in 1929, and left in 1953 to become a founder of the Atlantic Coast Conference.

Teams for then Trinity College were known originally as the Trinity Eleven, the Blue and White or the Methodists. William H. Lander, as editor-in-chief, and Mike Bradshaw, as managing editor, of the Trinity Chronicle began the academic year 1922–23 referring to the athletic teams as the Blue Devils. The Chronicle staff continued its use and through repetition, Blue Devils eventually caught on. A Blue Devils baseball pitcher in 2014 In the 2000–01 season, the Blue Devils posted a 30–4 record, won the ACC Tournament and ACC regular season championships, and earned a No. 1 seed in the NCAA Tournament. The 2001–02 season produced similar success. She led the Blue Devils to a 31–4 record and an NCAA Final Four appearance. Duke became the first ACC school to produce an undefeated 19–0 record in the ACC by winning the regular season and Tournament titles.

Goestenkors led the Blue Devils to an ACC-record 35–2 ledger in the 2002–03 season and their second straight NCAA Final Four appearance. For the second consecutive year, Duke posted a 19–0 record against ACC opponents.

In 2003–04, with Player of the year Alana Beard leading the way, the Blue Devils advanced to the NCAA Elite Eight, and won a fourth-straight Atlantic Coast Conference regular season title and a fifth-straight ACC Tournament championship. Duke also broke the University of Connecticut's 76-game home winning streak with a 68–67 buzzer-beater victory in Hartford, Connecticut.[26]

The 2006–07 season ended with a 32–2 record and notched the school's first ever undefeated regular season (30–0). This also set an NCAA-record seventh straight 30-win season. Goestenkors is often known as the "winningest coach not to have won a championship", having finished runner-up two times in fifteen years.

On April 18, 2007, Joanne P. McCallie, or Coach P, was introduced as the new coach of Duke's women's basketball team after Goestenkors left for the University of Texas.[27][28][29] Through 2011, the Blue Devils have won seven ACC Championships, the third most in the ACC.

Stephen Kovacs (1972–2022) became an Assistant Fencing Coach at Duke University in August 2010, and held the position through 2013.[31][32][33] While at Duke he mentored three-time NCAA women's saber champion Becca Ward.[32] Half a dozen years later Kovacs was accused of sexually assaulting two fencing students elsewhere, and he died in prison in 2022.[34]

Williams Field at Jack Katz Stadium is home to the Duke Field Hockey team. The facility is located on the University's East campus at 705 Broad St., in Durham. The facility was completed in 1996, and then was renovated on 2011.[38]

Wallace Wade Stadium, home to Duke football and site of the 1942 Rose Bowl.

The most famous Duke football season came in 1938, when Wallace Wade was head coach and the "Iron Dukes" were born. Wade shocked the college football world by leaving Alabama for Duke in 1930, later rationalizing the move by saying that Duke shared his belief that a school should provide its athletes with a strong academic background. Wade's success at Alabama (three national championships) translated well to Duke's program, most notably in 1938, when his "Iron Dukes" went unscored upon the entire regular season. Duke reached their first Rose Bowl appearance, where they lost 7–3 when USC scored a touchdown in the final minute of the game on a pass from a second-string quarterback to a third string tight end. Wade's Blue Devils lost another Rose Bowl to Oregon State in 1942, this one held at Duke's home stadium in Durham, North Carolina due to Pearl Harbor. Wade's achievements placed him in the Hall of Fame.

The football program also had a string of successful years in the late 1980s when the team was coached by Steve Spurrier. Spurrier led the Blue Devils to three consecutive winning seasons from 1987–1989, culminating with the Blue Devils sharing the ACC title in 1989 and playing in the All-American Bowl, where the Blue Devils lost to Texas Tech. The 1989 ACC title was the last title won by a school in the state of North Carolina until Wake Forest won their second ACC crown in 2006.

The team also rose to prominence in 1994, the first season under coach Fred Goldsmith. The team raced out to an 8–1 record, and was briefly ranked as high as #13 in the country before losing the last two games of the season 24–23 to North Carolina State and 41–40 to arch-rival North Carolina. The 1994 team played in the program's first New Years Day Bowl game since 1962, falling to Wisconsin 34–21 in the Hall of Fame Bowl, now known as the Outback Bowl.

The Blue Devils are coached by David Cutcliffe, who had been head coach at Ole Miss and offensive coordinator at the University of Tennessee. They have won seven ACC Football Championships, which is the fourth most in the ACC trailing only Clemson, FSU, and Maryland. Ten ACC Football Players of the Year have come from Duke, the most in the ACC. Additionally, three 3 Pro Football Hall of Famers have come through Duke's program, second only to the Miami Hurricanes who have had 4 Hall of Famers, for the most in the ACC.

Duke is consistently ranked at or near the top of the list of Division I-A schools which graduate nearly all of their football players. Duke has topped the list 12 years, earning it the most Academic Achievement Awards of any university. Notre Dame has been honored six times, while Boston College and Northwestern have won the award four times each.[39]

Their best finish in the NCAA Championship was second place in 1947. Laetitia Beck, who won the Israeli championship at the age of 12 and was named ACC Rookie of the Year in 2011, played for the team.[44] In 2014, Beck became the first Israeli to qualify for a major professional golf tour.

The men's lacrosse program has risen in prominence to challenge the traditional lacrosse powers such as Johns Hopkins, Maryland, Princeton, and Syracuse, as well as more recent contenders like North Carolina and Virginia. The team won the national title in 2010 after defeating Notre Dame 6–5 in overtime and won their second national title in 2013 after defeating Syracuse 16–10. The Blue Devils then repeated in 2014, defeating Notre Dame 11-9 to win their second straight national championship and third in five years. They also reached the championship game in 2005 and 2007.[45][46]

The men's lacrosse team gained national attention in the 2006 lacrosse incident, where members of the team were falsely accused of raping an exotic dancer at a team party. The investigation led to the cancellation of the 2006 season and the resignation of coach Mike Pressler. Contradictions in the accuser's many changing stories, unimpeachable alibi evidence provided by the players, and misconduct of then-Durham District Attorney Mike Nifong led to all charges being dropped and the attorney general declaring the players innocent. Nifong was later removed and disbarred due to his misconduct in the case, and the team members who lost their season were granted another year of eligibility.

Megan Cooke is the head coach for Duke's rowing teams. Her husband Simon Carcagno is also part of the coaching staff.

The 1986 team won the NCAA Division I Men's Soccer Championship.

The women's soccer team was founded in 1988.[47] The team has advanced to the NCAA Tournament 23 times, and finished as runners up three times. The team has won the ACC regular season title three times.

The team is in their second year of competing in the ACC.

The team is coached by Dan Colella.

Women's tennis reached the final four in the 2019 NCAA.

In 1929 the Blue Devil Wrestling team was founded. The team competes in the Atlantic Coast Conference (ACC) and is coached by Oklahoma State University 1988 graduate Glen Lanham.[48] Ed Newman, who went on to a 12-year NFL career in football, won All Conference honors twice as a heavyweight wrestle, and twice won the ACC heavyweight championship.[49] The team competes on campus in the Card Gymnasium. In 2009, heavyweight Konrad Dudziak became Duke's first All-American placing 2nd in 2009 and 4th in 2010. Conner Hartmann became the program's first three-time All-American, finishing 5th in 2014, 6th in 2015, and 7th in 2016.

ACC Athletes of the Year

Note: * indicates Duke coach at time of participation in Olympics

In 2008, five Duke graduates qualified for the Olympic marathon trials, more than any other university.[54]

History of the mascot 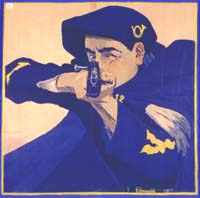 As World War I ended, Duke's Board of Trustees, then called the "Trinity College Board of Trustees", lifted their quarter century ban of football on campus leading to an interest in naming the athletic teams.[55] The team was then known as the Trinity Eleven, the Blue and White, or the Methodists (as opposed to the Baptists of nearby rival Wake Forest University). Because of the ambiguity, the student newspaper, the Trinity Chronicle (now called The Chronicle) launched a campaign to create a new mascot. Nominations for a new team name included Catamounts, Grizzlies, Badgers, Dreadnaughts, and Captains. The Trinity Chronicle editor narrowed the many nominations down to those that utilized the school colors of dark blue and white. The narrowed list consisted of Blue Titans, Blue Eagles, polar bears, Blue Devils, Royal Blazes, and Blue Warriors. None of the nominations proved to be a clear favorite, but the name Blue Devils elicited criticism that could potentially engender opposition on campus. These fears were partly alleviated when it was revealed that the name was military and patriotic rather than anti-religious; the name actually refers to the Chasseurs Alpins, also known as "les diables bleus" ("The Blue Devils"), a French military unit which had impressed many Duke students and alumni returning home from the Western Front. The nickname of the Chasseurs Alpins was derived from the blue jacket and blue-grey breeches worn as part of their World War I-era uniform. Even with this explanation, however, that year's football season passed with no official selection.

During the 1922–1923 academic year, campus student leaders and the editors of the two other student publications, The Archive and The Chanticleer, decided that the newspaper staff should decide the name on their own because the nomination process had proved inconclusive. Editor-in-chief William H. Lander and managing editor Mike Bradshaw began referring to the athletic teams as the Blue Devils. Though the name was not officially used that year, no opposition to the name arose. The Chronicle's staff continued to use the name and eventually "Blue Devils" became the official mascot and nickname of the Duke athletics program.

Duke has two official fight songs, "Fight! Blue Devils, Fight!" and "Blue and White", in addition to their alma mater, "Dear Old Duke".[56] "Fight! Blue Devils, Fight!" was composed by J.F. Hewitt with lyrics by Douglas Ballin. In 2010, Michael Pinto of Bleacher Report ranked it as the 32nd best college football fight song.[57] The lyrics and music for "Blue and White" were written by G.E. Leftwich, Jr.[citation needed]