Ben 10 (retroactively known as Classic Ben 10) is an American animated series created by Man of Action. It is produced by Cartoon Network Studios and Distributed By Warner Bros. Domestic Television. The series is about a 10-year-old boy named Ben Tennyson who gets a watch-style alien device called the "Omnitrix". Attached to his wrist, it allows him to transform into 10 different alien creatures with different abilities, allowing him to fight evil from Earth and space with his cousin Gwen and grandfather Max. The series first aired on Cartoon Network as a sneak peek on December 27, 2005, as part of "Sneak Peek Week", airing alongside other shows, including My Gym Partner's a Monkey, Robotboy, and Zixx. The show later began airing on January 13, 2006, and ended on April 15, 2008.

The series gradually became popular and was nominated for two Emmy Awards, winning one for "Outstanding Individual Achievement in Animation". The show would go on to spawn a franchise. Ben 10 was succeeded by Ben 10: Alien Force, Ben 10: Ultimate Alien, and Ben 10: Omniverse. A reboot of the series premiered in 2016.[2][3]

The series centers around Ben Tennyson (Tara Strong), a ten-year-old boy on a cross-country summer vacation, with his cousin Gwen (Meagan Smith) and their grandfather Max (Paul Eiding). On their first night camping in their grandfather's RV affectionately named the "Rustbucket," Ben finds an alien pod with a mysterious watch-style device named the Omnitrix. The device then permanently attaches itself to his wrist giving him the ability to transform into a variety of alien life-forms each with its own unique skills and powers. With his newfound superpowers Ben has to learn the responsibilities of being a hero. During their vacation, the Tennysons are attacked by various enemies ranging from space aliens to supernatural entities.

Ben is a cocky, immature boy, who is not above enjoying attention and enjoys making jokes even during fights. Though his immaturity makes a bad impression on some people, Ben is good-hearted, noble and loyal, and his actions are motivated above all by a strong and sincere will to help and save others in need. He will stop at nothing to protect his family or anyone in danger whether human or alien. Ben proves to be resourceful, intelligent (Ben has been known to have an eidetic memory), shrewd and cunning when needed, which saved him from many situations, especially when the Omnitrix cannot activate or doesn't provide him with the alien he originally wanted.

Gwen is Ben's cousin and is depicted as a kind and intelligent girl, very skilled with computers and possessing a level of martial arts skills. She is also very independent but is very organized, sometimes to the point of compulsive, but can be a light-hearted schemer and immature as Ben. Overall, her most notable skill is her innate, if latent, ability at magic, first shown in "Tough Luck" when She was able to use Hex's staff, which can only be used by a master magician, to defeat Charmcaster. She later obtains Charmcaster's spellbook in "Change of Face" and begins improving her magic.

Ben and Gwen's grandfather, who takes the two on a cross-country road trip for summer vacation. In "Truth" Max reveals he was a part of the Plumber's an intergalactic police force, and handled many extraterrestrial encounters in the past. His history as a plumber has given him knowledge, training, and equipment for fighting aliens as well as an unconventional taste in food, much to the dismay of his grandchildren. In "The Visitor," an old alien acquaintance of Max's called Xylene reveals that Max was the intended recipient of the Omnitrix. 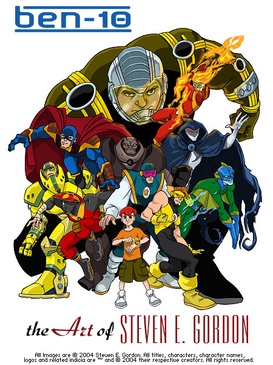 Steve E. Gordon's original concepts for Ben 10, in which a red-haired Ben Tennyson uses the Omnitrix to transform into ten human superheroes.

Ben 10 was created by "Man of Action" and was produced by Cartoon Network Studios. Man of Action is a group consisting of comic book creators Duncan Rouleau, Joe Casey, Joe Kelly, and Steven T. Seagle. The group worked on Ben 10's concept roughly 3 years before Cartoon Network picked up the series. Dave Johnson also helped in the design development.[4]

Early on in development, it was decided that a villain would be within the Omnitrix. After Ghostfreak was created the creators added dialogue into the first season to give the audience that there is something more to Ghostfreak.[5] Originally Cannonbolt the 11th alien transformation in the series, was going to be in the original set of aliens, but was replaced with Ghostfreak.[5]

When doing test animations for the series the first alien transformation to be tested was Four Arms. It was the most popular transformation out of all the aliens for "Man of Action".[5] Many of the unused designs for Upchuck were recycled in the episode "Ben 10,000" as two of Ben's aliens "Spitter" and "Articguana", and as villain Sploot.

Steven E. Gordon worked on an early version of the show. His concept work reveals that Ben Tennyson was originally going to be a red-headed young boy. Gordon also has early designs of the Omnitrix which look more like a watch than the final version, as well as different designs and names for the alien transformations.[6] Some of the early names for the transformations were "StrongGuy", "Inferno", "RazorJaws", "Dragonfly", "Plantguy", and "Digger". Some of the early designs for the aliens are more human and superheroic, similar to Dial H for Hero.[6]

Sunmin Image Pictures, Dong Woo Animation and Lotto Animation, Inc. contributed some of the animation for this series.

The theme song for the series was written by Andy Sturmer and sung by Mz. Moxy.[7] The main title were created by Renegade Animation, who was well known for Hi Hi Puffy AmiYumi, which was created by Ben 10's executive producer Sam Register. The flash animated sequence during the main title was designed to let the audience know that the show is going to be fun and not just an action show.[8] The opening credits were altered in the third season and beyond to reflect that Ghostfreak was no longer to be used, and was replaced by Cannonbolt as the ninth alien.

Two Ben 10 films have been released at different times during 2007 and 2008. The first is a regular animated feature called Secret of the Omnitrix, in which the Omnitrix is accidentally set to self-destruct and Ben must track down its creator to stop it. A trailer of the film was released with the film Billy & Mandy: Wrath of the Spider Queen, and it aired August 10, 2007. Michael Ouweleen described the film's villain, which was actually Vilgax, as "like Darth Vader without the sense of humor."[9] A different version of Secrets of the Omnitrix, which introduced a different alien (Eye Guy) to the one in the original (Heatblast), aired on September 1, 2007. A third version (in which XLR8 was featured) aired on October 20, 2007. It was stated during the premiere of Alien Force that Secret of the Omnitrix was intended to be the chronological finale of Ben 10, even though it was broadcast long before the last episode, which was not canon.

A CGI movie titled Ben 10: Destroy All Aliens was first released on March 11, 2012, in Asia[10] and on March 23, 2012[11][12] in the US. The movie focuses on a 10-year-old Ben returning to school after the summer.[13][14] The movie was released in 2 different versions on Asia. The Filipino viewers heard the Philippine winners while the rest of Southeast Asia heard the Malaysian kids.[15]

Ben 10: Race Against Time is the first film in the series. It revolves around Ben (Graham Phillips), Gwen (Haley Ramm) and Grandpa Max (Lee Majors) returning to their hometown of Bellwood and attempting to adjust to being ‘normal’ again. Unfortunately, their lives are once again disrupted by a mysterious alien known as Eon (Christien Anholt), who has an unexpected connection to the Omnitrix.

Ben 10: Alien Force is the sequel to the show set five years after the original series. As an indirect result, this series is darker in tone compared to its predecessor. The series premiered on Cartoon Network on April 18, 2008, and ended on March 26, 2010. It has since been premiered in Canada, on Teletoon.[16] A video game of the show is now out for the Nintendo DS, Wii, PlayStation 2 and PlayStation Portable.[17]

Ben 10 appears in Cartoon Network's online MMO FusionFall. The character design for Ben Tennyson was changed when the original Ben 10 series ended and was replaced by Ben 10: Alien Force. In the game, he serves as a "Player Guide" offering guide-based missions and special items that can only be used with certain guides.