Codename: Kids Next Door[e] is an American animated television series created by Mr. Warburton for Cartoon Network and distributed by Warner Bros. Domestic Television. The series follows the adventures of a diverse group of five 10-year-old children who operate from a high-tech treehouse, fighting against adult and teen villains with advanced 2×4 technology. Using their code names (Numbuhs 1, 2, 3, 4, and 5), they are Sector V, part of a global organization called the Kids Next Door.[2]

The series' pilot premiered on Cartoon Network in mid-2001 as part of The Big Pick II, a special broadcast event showcasing 11 pilots for different series. The winner of a viewers' poll by Cartoon Network would decide which pilot would be greenlit to be a full series.[3] After winning the poll, the series premiered on December 6, 2002, and concluded on January 21, 2008, after six seasons and 78 episodes. Two television films were broadcast: Operation: Z.E.R.O.,[4] which aired in 2006, and Operation: I.N.T.E.R.V.I.E.W.S., which aired as the series finale in 2008.[5] A special half-hour crossover episode with fellow Cartoon Network series, The Grim Adventures of Billy & Mandy, aired in 2007. 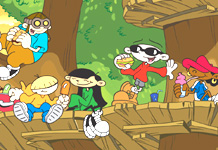 The show revolves around a group of five 10-year old kids (later retconned to be varying ages), using codenames Numbers 1 through 5, who are the main home operatives of what is known as Sector V, which is part of a worldwide espionage-style organization called the Kids Next Door. Their mission is to fight crimes against kids (such as homework and flossing), many of which are willingly committed by "evil" adults, senior citizens, teenagers, and other children. Numbuh 1 is the bald, astute, no-nonsense, workaholic British-American boy Nigel Uno, leader of Sector V. Numbuh 2 is the overweight, intellectual, aviation enthusiastic, pun-cracking Jewish-American boy Hoagie Gilligan Jr. Numbuh 3 is the happy-go-lucky Japanese-American girl Kuki Sanban. Numbuh 4 is the short-tempered, irrational, and fighting-prone Australian-American boy Wallabee Beetles. Numbuh 5 is the intelligent, laid-back, tomboyish African-American girl Abigail Lincoln.

Following a period of training, every member of the Kids Next Door chooses a number or alphanumeric code (deliberately pronounced and spelled as "Numbuh") and is sent to a "sector" that acts as their home base. The sector headquarters, like some of the organization's bases and facilities, are tree houses, with both treehouse and the tree it is in being of ludicrous proportions, and often suited to their environment. This includes a base constructed beneath the Arctic ice shelf, and a base built into a large pine tree. The main headquarters of the Kids Next Door is a treehouse Moon Base. The Kids Next Door follow their oath of protecting other kids as well as battling adulthood until the age of 13 when they are "decommissioned", a process of wiping their memories of any past KND activity and warping their minds. Such a practice has inevitably led to the creation of many KND villains who escaped decommissioning (such as Numbuh 5's older sister Cree, formerly known as Numbuh 11, and Chad, formerly known as Numbuh 274 and supreme commander of the Kids Next Door).

The practice of strict decommissioning at age 13 was later on revealed to be subject to exceptions: kids who are deemed exceptional agents are offered the chance to carry on in KND as spies infiltrating the teen organization in the Teens Next Door.[6] Decommissioning has also proved reversible via a "re-commissioning" module used four times in the series (once in Operation: E.N.D. and three times in Operation: Z.E.R.O.).[7][8]

KND agents utilize a vast array of mechanical, electronic gadgets, weapons, and machinery, collectively referred to as 2x4 (two-by-four) technology. The KND's 2x4 technology was originally conceived as being constructed from an assortment of objects, mostly common household ones. However, as the series progressed, the kind of objects their technology was constructed from became bigger, consisting of things such as large vehicles and small buildings. Not only that, but the complexity of their technology, such as their defensive weaponry and means of transportation, advanced to such absurd levels as to be considered science fiction, despite all of it still being constructed from nothing but an assortment of objects.

The episodes are titularly presented as the missions of the members of Sector V in the Kids Next Door, denoted as "Operation:" followed by an acronym that can give viewers clues as to what each mission is about. Most episodes are divided into two parts, each with a different mission, while some episodes consist of two directly linked parts with one mission. Usually, the episodes have very little continuity with each other, although occasionally an episode will have a reference to at least one earlier episode and/or lead to consequences in later ones. Season Five's "Operation: O.U.T.B.R.E.A.K." is a direct continuation of the episode "Operation: V.I.R.U.S.", and Season Six's "Operation: S.C.I.E.N.C.E." leads into "Operation: A.M.I.S.H." while another pair of Season Six episodes; "Operation: R.E.C.E.S.S." and "Operation: H.A.M.S.T.E.R.", occur simultaneously, the latter showing what sort of thing transpires while the team is away.

Stories in the earlier episodes were often about typical childhood problems but magnified and exaggerated. As the series progressed, a more complex and continuous storyline developed. The final season revolved around the mysterious Splinter Cell within the KND itself observing Numbuh One for an unknown assignment, which was concluded in the series finale "Operation: I.N.T.E.R.V.I.E.W.S.".

The show frequently contains references to many films, television series, comic books, anime and manga especially in the later seasons, such as Star Wars, Ghostbusters, Planet of the Apes, Jaws, Jurassic Park, The Lord of the Rings, Godzilla, The Terminator, Spider-Man, Dragon Ball Z, Pokémon, James Bond, Star Trek, Transformers, Harry Potter, Rambo, Alien, The Matrix, X-Men, the Fantastic Four, Predator, RoboCop, Pirates of the Caribbean, 2001: A Space Odyssey, The Godfather, On the Waterfront, Men in Black, Doctor Who, Indiana Jones and Mission Impossible; with James Bond, Star Trek, and Star Wars being the most prominently referenced in the series.

Warburton created a pilot episode, titled "Diseasy Does It", for another planned show, Kenny and the Chimp, which was to be produced by Hanna-Barbera. Among the planned recurring characters for Kenny and the Chimp was a group of rebellious children known as "Those Kids Next Door", who carried out their mischief from a house next to Kenny's home, and frequently caused trouble for him. The plot-line was then changed to focus on the group of kids alone, and later, the kids battling adulthood.[9] In 2001, the show's pilot episode, "No P in the OOL", which was produced at Cartoon Network Studios, won a Cartoon Network viewer's poll, and as a result, Codename: Kids Next Door was greenlit to become a series, while Kenny and the Chimp was not greenlit by the channel.[10] The character Professor XXXL, who appeared in "Diseasy Does It", became a recurring character in Codename: Kids Next Door after Kenny and the Chimp was not picked up for a series. Despite this, Kenny and Chimpy did make a cameo in "No P In The OOL".

Codename: Kids Next Door was the most popular TV series produced at Curious Pictures, who previously did the work on Sheep in the Big City at Cartoon Network.

In 2005, the series won the Best Television Series for Children Award at the Ottawa International Animation Festival for "Operation: A.R.C.H.I.V.E.", which was written by Mr. Warburton and Mo Willems and storyboarded by Guy Moore and Quack Leard.[13]

Two DVDs in two volumes were released of the series, totaling sixteen episodes by Warner Home Video. The entire series is available on digital purchase in six seasons. On May 30, 2019, the entire series, except for the "Operation: Z.E.R.O." TV movie, was added to the Boomerang streaming service and its VRV channel.

In other series or works

On an episode of The Grim Adventures of Billy & Mandy entitled "Sickly Sweet", a scene depicts Grim watching Codename: Kids Next Door. Also, in Billy & Mandy's Big Boogey Adventure, Numbuh Three makes a cameo as Grim's replacement. Numbuh Two also made a cameo in "Billy & Mandy Moon the Moon". Also, in the MAD episode "Taking Nemo / Once Upon a Toon", Numbuh One makes a cameo as one of the cartoon characters who has forgotten his identity. The show was also referenced in the New Boyz song "Tough Kids".[27] In the 2004 film Sideways, the show is playing on Miles' mother's television set. The Delightful Children from Down the Lane were reviewed on the Orientation Videos for Villains of Villainous "The Lost Cases of the Treehouse". Numbuh Five made a cameo in the OK K.O.! Let's Be Heroes episode "Crossover Nexus". In the Craig of the Creek episode "Kelsey the Elder", Barry mentions this show.

A trading card game based on the series was launched by Wizards of the Coast in July 2005.

Two video games were released for the series: Operation: S.O.D.A. in 2004 for the Game Boy Advance and Operation: V.I.D.E.O.G.A.M.E. in 2005 for PlayStation 2, Xbox, and GameCube. Several browser games were also released on the Cartoon Network website. The MMORPG style game Operation: B.E.S.T. was playable for a brief time in 2005, but was shut down shortly thereafter.

In Cartoon Network Universe: FusionFall, Numbuhs One through Five, and villains Father, Toiletnator, and Stickybeard appear as non-playable characters. KNDefense armor and 2x4 Tech weapons are available for players, Sector V's treehouse can be explored, and KND S.C.A.M.P.E.R.s can be used for transport. In Cartoon Network: Punch Time Explosion, Father and Numbuh 1 are playable, Sector V Treehouse and the C.O.O.L.-B.U.S. are arenas, and Numbuh 2 and Stickybeard are assisted characters. In the console versions, Toiletnator is a playable character, Numbuh 4 is an assist character, and KND Moonbase is an arena.

On January 31, 2008, during a Q&A session on LiveJournal, when Tom Warburton was asked if "Operation: I.N.T.E.R.V.I.E.W.S." was in fact the true finale of Codename: KND, Warburton said that it was not necessarily meant to be the finale, stating that a revival could be made in the future.[28]

Warburton had unsuccessfully pitched a Galactic: Kids Next Door spin-off several times to Cartoon Network executives,[29] and at one point he considered to make a TV movie as a pilot for the potential spin-off series.[28] Following having no response, Warburton eventually decided to create a pitch that would be distributed over the internet pseudonymously to try and get the series approved with help from fans. Warburton wrote the script and collaborated with others who had worked on the series to produce an animatic-style pitch.[30][29] On March 19, 2015, the animatic was released, entitled Galactic: Kids Next Door.[31] On April 1, 2015, a fan-made petition was started on Change.org to make G:KND a real series, was signed by Warburton himself and Dee Bradley Baker.[32] Rat Animation also showed interest in the project.[33] Warburton later noted that the executives at Cartoon Network had noticed the response but were not interested in a continuation to KND, though he remained confident to get the sequel approved in the future.[32]